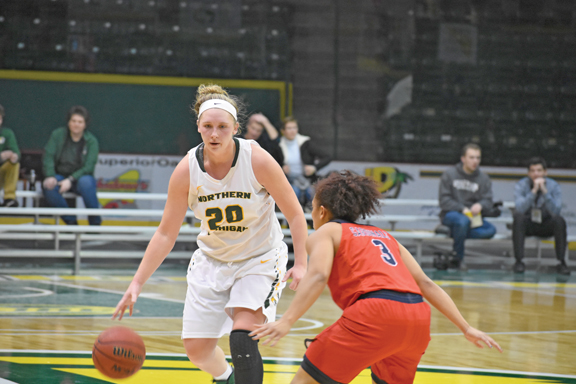 Northern Michigan University’s Darby Youngstrom looks for an opening against Saginaw Valley State in a Feb. 7 game at the Berry Events Center in Marquette. This Wildcats team earned Biggest Upset of the 2018-19 season for a victory over No. 4 Ashland in the NCAA Division II regional, while Youngstrom was the team’s honoree for an Elite 20 award. (Journal file photo by Ryan Stieg)

MARQUETTE — The Northern Michigan University Athletic Department issued several other awards in addition to those outlined in a recent Mining Journal story.

Lindsay Griffith and the late Todd “Stix” Honch were named NMU Fans of the Year, while Dr. Randy Appleton of the mathematics and computer science department earned Most Influential/Supportive Faculty Member.

The women’s basketball team earned Biggest Upset of the season after defeating four-time GLIAC champion and 2016 national champion Ashland in the first round of the NCAA Division II Midwest Regional. The Eagles were ranked No. 4 in the country at the time of the Wildcats’ 64-57 victory.

Elite 20 awards were given to the student-athlete on each team with the highest grade-point average. In case of a tie, the honor went to the athlete with the most credits.

Wildcats’ teams also handed out their own team awards as follows: