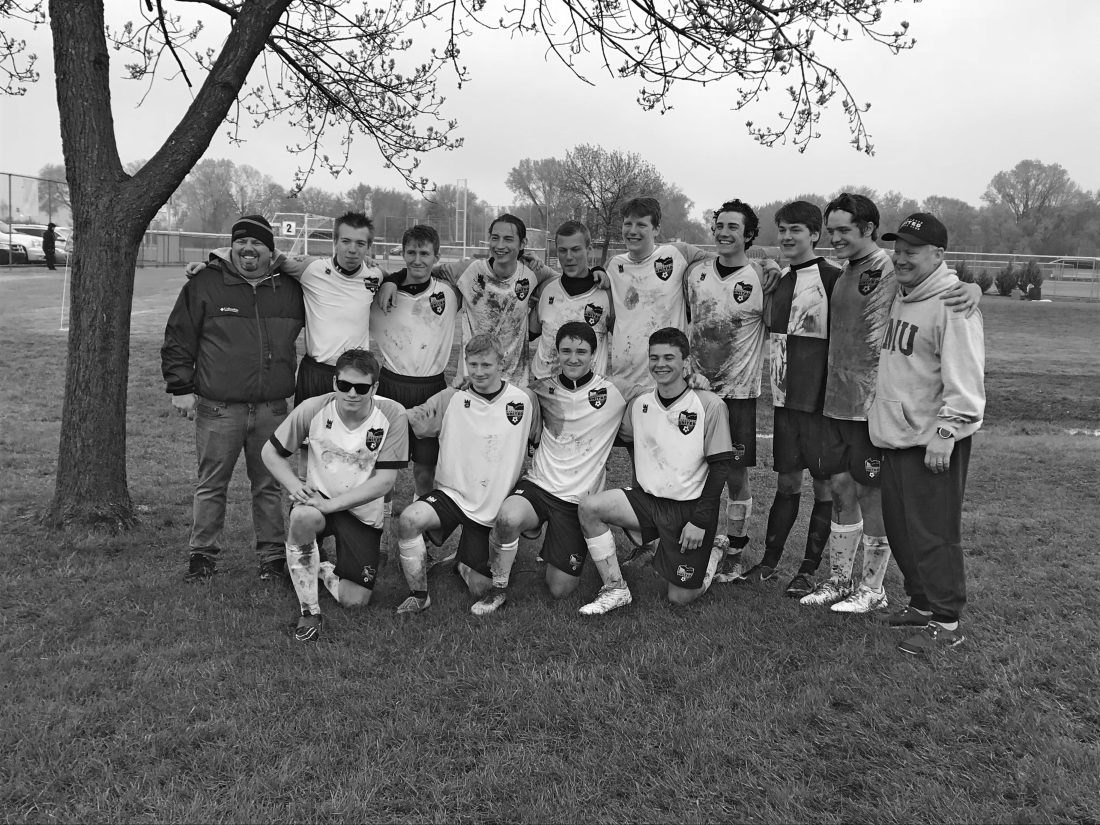 MARQUETTE — The Marquette United under-18 boys soccer team won a championship and finished runner-up at a pair of tournaments played in Wisconsin this spring.

Marquette won the FC Menasha Classic on May 18-19 and finished second at the Eau Claire Soccer Tournament on June 8-9.

All of its opposition in both events were against Wisconsin teams.

Marquette won and tied its round-robin games before winning twice more to capture the title despite the tourney being delayed by lightning on its final day.

MU opened with a scoreless tie against KASA Lazers of Kimberly as goalie Liam Jeevar stopped all six shots he faced.

Marquette clinched its spot in the playoffs by shutting out HYSA United of Eagle River 4-0, all the goals coming in the first half.

Nathan Judsen scored the first goal and assisted on two others, while Trevor Salmon had a penalty-kick goal and an assist. Mack Vezina scored the other goal and Joe Lagrou assisted on Judsen’s score. Jeevar faced five shots.

In a playoff semifinal, Vezina scored the game’s lone goal in the second half on an assist from Salmon as Marquette prevailed 1-0 over HYSA United. Jeevar faced two shots.

And in the finals, No. 1 seed Marquette pulled out a 3-2 overtime shootout victory over No. 2 seed NEW United of Appleton. Judsen and Rhys Wastell scored in regulation for Marquette with assists on both goals going to Tanner Cain.

MU led 2-1 at halftime before the Appleton squad forced OT with the only second-half goal as Jeevar faced eight shots in regulation.

In the shootout, Salmon, Vezina, Judsen and Jackson Holdwick scored for Marquette as Jeevar managed to stop two shots.

“Being our first games of the season and with many new faces on the team, we improved and got better each game,” MU coach Dan Salmon said. “The most pressure a goalie will ever see is a shootout in a championship game and Liam stood tall making two great saves.”

Marquette improved to 4-1-3 for the season after winning one game and tying two others in round-robin play before losing in the championship.

“Even though we had not practiced in anything warmer than 60 degrees, the team played well in the 90-degree heat,” Coach Salmon said. “They played with a lot of heart.”

MU opened with a 1-1 tie against FC United of Appleton as Judsen scored in the second half on an assist from Finn Whalen. Jeevar faced 11 shots, including stopping a first-half penalty kick.

Marquette posted a 4-0 win over Wisconsin Rapids U19 as Cain scored two goals and had an assist as he had the only score of the second half. Judsen and Mack Vezina also scored with Vezina’s on a penalty kick. Tom Carey had two assists and Cain one as Jeevar faced seven shots.

In its final round-robin game, MU again posted a 1-1 tie, this time against New Richmond. Judsen scored his team’s lone goal in the first half on an assist from Lagrou. Jeevar faced five shots.

In the championship, No. 1 seed FC United of Appleton posted a 2-0 victory as Jeevar faced a dozen shots.