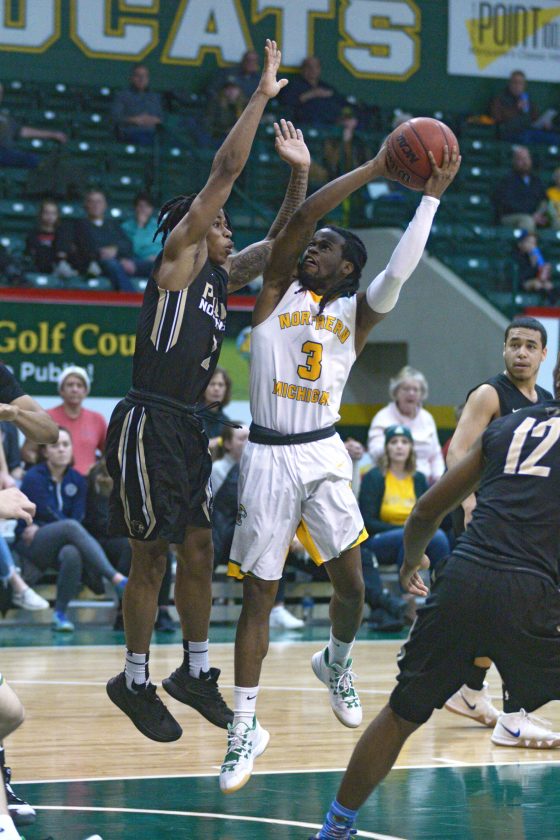 MARQUETTE — After getting handed two losses on the road the week before, the Northern Michigan University men’s basketball team was looking to rebound in a big way and it looked like it was on its way last week.

The Wildcats had a solid defensive effort to defeat Wisconsin Parkside Thursday and seemed to be having an easy time with Purdue Northwest Saturday. However, things went downhill in the second half and NMU needed a last-second jumper from Sam Taylor just to get it to overtime before it fell in the extra session.

The big stat coming from that loss to PNW was that Northern (11-12, 8-7 GLIAC) was an freezing cold 9 for 42 for two-pointers in the paint and that’s what head coach Matt Majkrzak will remember from the game.

“I watched a lot of film, not just on that game, but just tried to kind of figure out what we can do to get our offense going,” he said. “Spent a lot of time Saturday night and Sunday just trying to figure out any magic formula. I don’t know if I came up with one, but definitely just spent a lot of time trying to kind of piece together how we could play that poorly on offense.

“It was fascinating watching the game in some ways because it felt like there were about 10 to 15 things that if any one of them would’ve broke our way, we win and none of them did. It was tough because I think our effort was there. I think our energy was there. Execution wasn’t necessarily there, but it also wasn’t terrible. It wasn’t like we were just giving them easy shots, or it wasn’t like we were taking terrible shots. We just couldn’t finish. We’ve had our fair share of offensive issues, but I don’t think any of them have been that before. It was kind of weird to watch on film and live, it felt very just different and odd. It was almost like one of those games where you expected something to happen that never did.”

The good thing for NMU is still in playoff contention. It is two games behind Michigan Tech for second place in the GLIAC North and is currently tied with fifth overall with Saginaw Valley State and Northwood. The Wildcats can’t afford a big slide though and they have two tough games this week against Lake Superior State (10-13, 7-8) and Ferris State (22-5, 11-4). Northern played lockdown defense on the Lakers in January, holding them to 40 points, the first time the ‘Cats have done that to any opponent since the 2001-02 season.

“It won’t be that easy again,” Majkrzak said. “I don’t know the exact number, but for about six, seven years, I don’t think Northern had beaten Lake State at all, home or away. Last year, they finally snapped that streak and then we were able to get them the first time this year. Obviously, if you just look at the two schools, you’d like to think that Northern would be a better basketball school, but that just hasn’t been the case lately. And I think in a lot of ways, the Tech rivalry is always going to be what it is, but I think the Lake State series is going to be a very important one going forward because they’ve dominated it recently and I’d like to think that we’re able to kind of flip that, hopefully, in the coming years. So obviously, this is a huge game for that because we beat them the first time. If we can start to be better than them consistently, that’s going to go a long way toward standings and things like that, for not just this year, but for future years.

“So in a lot of ways, this is, to me, our biggest game of the year, and I kind of thought going into the year, this was one, I kind of, had in my mind as an absolutely huge game, both Lake State games. When you look at the standings, it’s certainly is gonna be that because if we can get a win, we’re going to be in a really good position to make the conference tournament. We’d still have an outside shot of hosting a game in the conference tournament. With a loss, we’re probably on the outside looking in, maybe not directly in the standings, but if you look at schedules and some of that kind of stuff, it makes the road a whole lot harder. So absolutely a huge game in kind of all the ways. In some ways, it’s almost nice coming out of the Purdue game to have that because it doesn’t allow you a whole lot of time to dwell on feeling sorry for yourself.”

Tipoff against the Lakers is set for 7:30 p.m. Thursday and the game against the Bulldogs is at 1 p.m. Saturday.