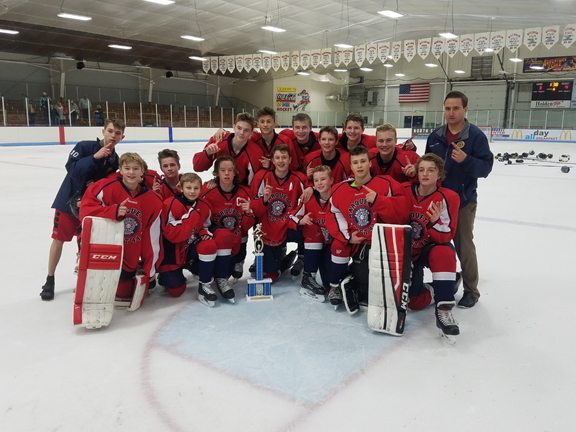 The Marquette team needed triple overtime to clinch the title in the championship game 4-3 over Little Falls, Minnesota, improving its record to 25-2-4.

Jaden Reilley scored the game winner with less than two minutes left in the third sudden-death period. Ansel Frost netted two goals and Dylan Baldwin one during regulation as goalie Carsen Hayes picked up the win.

Legion went 3-0-1 in pool play. Marquette got things rolling with a 3-1 win over host Superior, Wisconsin, as Reilley, Ethan Phillips and Drew Dellies and Reilley each scored a goal in support of Hayes in the Legion net.

The Marquette team added a 6-1 victory over Rochester, Minnesota, as Frost and Jack Sides each potted two goals and Skyler Deshone and Cole Ranta added one apiece. Brennen Hakkola got this win in front of the Legion goal.

Marquette also rolled to an 8-1 win over Chicago Lakes, Minnesota, as Reilley scored twice and Dellies, Sides, Phillips, Frost, Austin Ridl and Evan Kroll earned one each. Hayes got this goaltending win.

Legion ended pool play with a 1-1 draw against Little Falls, necessitating a rematch in Sunday’s finale. Ridl scored for Marquette as Hakkola was in net.

Here is a synopsis of their November and early December action:

The Marquette squad swept a pair of games from the Green Bay, Wisconsin, Bobcats Dec. 1-3.

In the opener, Phillips scored two goals and Baldwin, Sides and Kroll each netted one as Hayes got the win in net.

Then in Game 2, the Legion won a 7-5 offensive battle as Reilley and Sides each netted two goals and Dellies, Baldwin and Phillips added one apiece. Hakkola worked the net in this game.

At Winnetka, Illinois, over Thanksgiving weekend, Marquette split its games at the Wishbone Classic.

Legion won 7-1 over the Glenview, Illinois, Stars as Dellies, Deshone, Reilley, Sides, Ridl, Baldwin, Ranta and Joe DeMattia got scores and Hayes got the goaltending win.

Winnetka defeated Marquette 4-2 in Game 2 as Phillips and Reilley scored for Legion and Hakkola worked in the net.

Legion was shut out 2-0 in its next game against the Northbrook, Illinois, Bluehawks, as Hakkola was again in net.

In its final game, Marquette won 3-0 over the Northwest Illinois Chargers with Hakkola earning the shutout and Kroll netting a three-goal hat trick.

In the opener, Baldwin put together a hat trick-plus, netting four goals, while DeShone potted the other and Hakkola got the netminding victory.

In Game 2, Legion scored all the goals in the third period with Ridl, Ranta, Frost, Phillips and Reilley all denting the twine in support of Hayes in net.

In the finale, Baldwin netted another hat trick, a regular three-goal one, while Reilley scored twice and Phillips, Deshone and Frost had one each. Hakkola worked in the net.

In the opener, Dellies, Sides and Frost had two goals apiece while Deshone, Reilley, Baldwin, DeMattia and Owen Riipi added one each. Hakkola got the goalie win.

In Game 2, Ranta bagged a five-goaler, Reilley added another four and Baldwin registered three. Riipi and Frost had one apiece to help Hayes get the win.