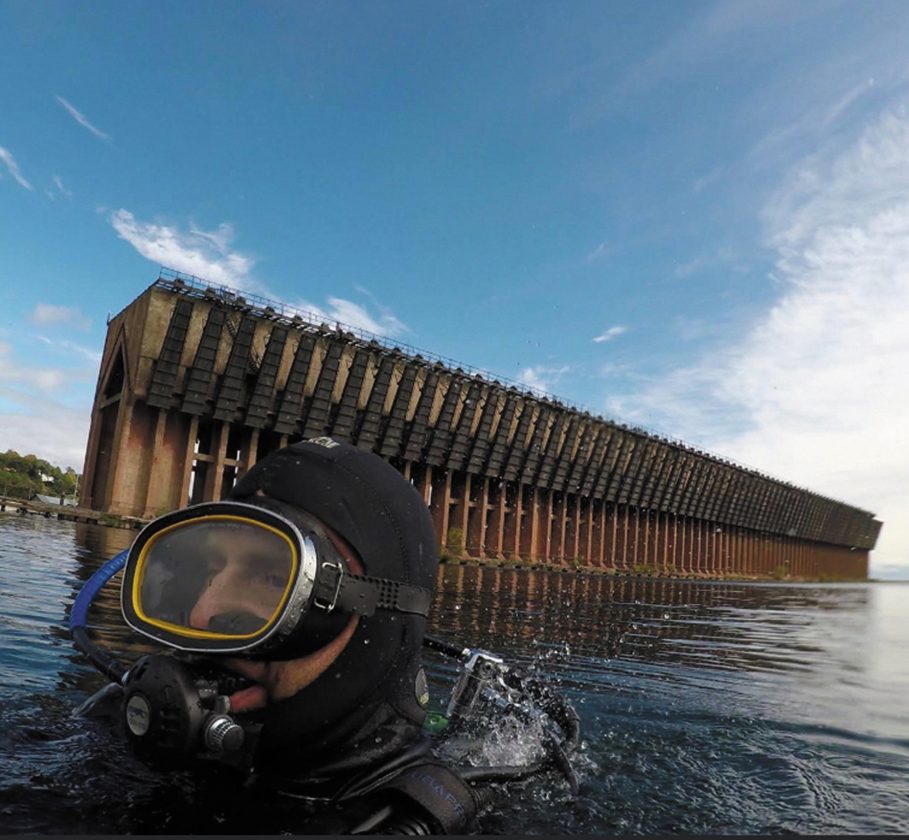 Scuba diver Don Fassbender dives for abandoned tires in Marquette’s Lower Harbor to help remove them from Lake Superior. Fassbender prepares for the second annual Lower Harbor Underwater Cleanup that will take place July 18, in hopes to round up all the remaining tires that were not picked up last summer. (Photo courtesy of Don Fassbender)

MARQUETTE — Over 4 tons of tires were removed from Mattson Lower Harbor in August in a public underwater cleanup, and this year, the goal is to pick up all the remnant tires still anchoring at the bottom of Lake Superior.

The second annual Marquette Lower Harbor Underwater Cleanup will take place from 10 a.m. to 1 p.m. July 18 at Mattson Lower Harbor Park. Volunteers are needed to help lend a hand when the team of divers help bring those hundreds of tires to the harbor wall surface, event organizer Don Fassbender said.

“Getting the gunk and junk out of the lake is what we want to do. Hopefully this will be the last year we have to do it, at least with the tires,” Fassbender said. “There will always be the wrappers and garbage thrown into the lake and cans … but the larger things, I’m hoping to be done with it this year.”

Fassbender, also a videographer, began his own underwater cleanup initiatives a couple of years ago when he’d visit a new area to scuba dive and documented his findings with his YouTube videos.

“The more people that piped up, the grander the idea. And I decided, ‘OK, we’re going to try to do something on a larger scale,'” he said.

After contacting the city and a few public departments to arrange a public underwater cleanup event, Fassbender said it was like a “grassroots movement.” Last year’s cleanup created some buzz in the Marquette community and also brought in faces from across the country to help remove the tires from the bottom of Lower Harbor, he noted.

This year, it’s no different with over 30 divers coming in from all over, including Oklahoma, South Carolina and Indiana. Even though last year’s event filled a 30-yard garbage container, lots of tires remain in the harbor, especially large tractor tires.

Removing the tires from the lake is critical because last year’s event showcased that invasive species latch onto those tires, such as zebra muscles. And it’s important to preserve the quality of the lake and protect it from harmful substances, he said.

“(Tires) leach toxins into the water … It’s carcinogens. There’s nasty things in rubber, that’s why they don’t let you burn them either and why you need special processes to get rid of this stuff. It’s not good for the environment. But it’s a petroleum-based product and that’s not good for the water; that’s the water we drink,” Fassbender said.

In advance, divers will collect the tires and put them into groups, which is important for the entire underwater cleanup process because “once you pull a tire out of the muck, you can’t see anything,” Fassbender explained. On the day of the event, a bulk of the work will already be finished. Once the tires are hauled out of the water with a backhoe tractor, volunteers will be needed to roll the tires into a garbage container in the park.

“It’s just a fun thing to watch people do this and if they can bring some rubber boots and gloves and some shoulders, by all means we can put them to work,” he said. “You know, it’s a heck of a visual so it might pound things into people’s heads that we don’t want to destroy our waters. We want to try to keep them clean and (if) they see all of the things that other people left in the water, … I think they’ll get the idea.”

The more people continue to pollute the waters, the worse it will be, Fassbender said, adding that he hopes that this event will increase education on water pollution and how important it is to protect the water for future generations.

For more information about the cleanup, visit Diver Don Scuba on Facebook to sign up or call Fassbender at 906-361-3088.