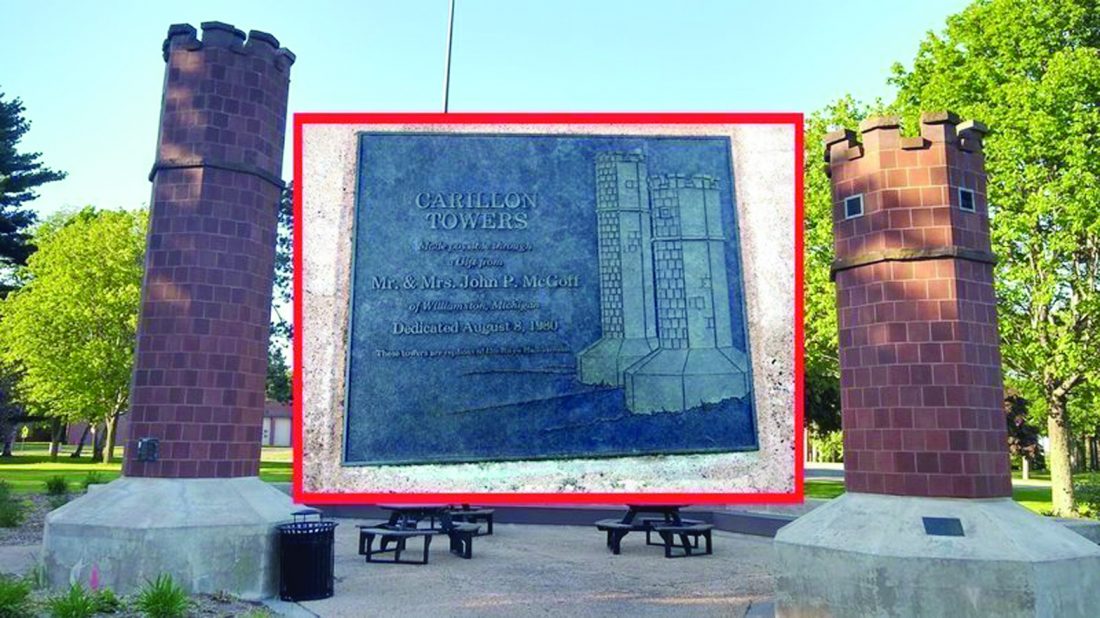 A plaque at Northern Michigan University’s Carillon Towers has been removed. The plaque is the subject of a Change.org petition stemming from the controversial background of John P. McGoff, a former member of the NMU Board of Control. (Photo courtesy of Change.org)

MARQUETTE — An online petition is urging the removal or rededication of the Carillon Towers on the campus of Northern Michigan University, a monument that has alleged ties to apartheid.

A plaque on the monument already has been removed, NMU said.

According to the petition at Change.org, the Carillon Towers were built to replicate the Kaye Hall Towers and were funded by the late John P. McGoff, a conservative newspaper magnate who was a prominent supporter of South Africa’s white supremacist apartheid government.

NMU acknowledged in a statement that a 1980 plaque commemorating the construction of the Carillon Towers near the Northern Center is the subject of a recent anonymous Change.org petition.

“Knowledge of the plaque’s connection to controversial campus events in the 1980s came about due to the petition,” the university said. “According to minutes of the board meeting on April 28, 1988, Mr. McGoff’s donation was returned.”

In a fall 2015 “Cat Flashback” article for Northern Magazine, written by NMU archivist Marcus Robyns, it was stated that on July 6, 1978, former and charter member of the NMU Board of Control, John P. McGoff, and his wife Margaret donated $300,000 to NMU for the creation of the McGoff Distinguished Lecture Series.

“Students and faculty did not oppose the MDLS itself or the selection of the visiting speakers; rather, they objected to the source of McGoff’s money,” Robyns wrote.

As a Republican Party activist, he “staunchly” opposed economic sanctions against South Africa, according to the article, which stated he allegedly accepted $11 million from the South African government in an unsuccessful attempt to purchase several large newspapers to support news reports favorable to the apartheid regime.

McGoff also was president of the Panax Corporation, a newspaper conglomerate that once included The Mining Journal.

In 1985, the U.S. government charged McGoff for being an unregistered agent of the South African government, and in the following year, he was acquitted by a district court judge who ruled that the statute of limitations had expired.

Robyns wrote that in 1978, Nobel Peace Prize recipient and Holocaust survivor Elie Wiesel canceled his MDLS visit after being informed of the McGoff controversy. Wiesel’s decision prompted McGoff to request that NMU end the MDLS and return the $300,000.

“Wiesel eventually did come to NMU in 1991, but that visit failed to fully heal the divisions among faculty, staff, students and the Marquette community over the ignoble end of the McGoff Distinguished Lecture Series,” Robyns wrote.

The Change.org petition said a plaque on the towers bears the name of Mr. and Mrs. John P. McGoff.

“The fact that NMU has not yet addressed this after all these years — either by rededicating the towers or removing them altogether — is shameful,” the petition reads. “Today, with the renewed push for racial equality and justice in America following the death of George Floyd, it is more important than ever for our community to sever ties to any racist cause or movement, and NMU’s Carillon Towers stand in direct opposition to that.

“Though it might be compelling to simply call for the towers to be removed, I feel it would be more helpful and also educational to rededicate the towers to promoting racial equality, and educating on the tragedy of apartheid in South Africa.”

As of today, 1,194 signatures had been collected.