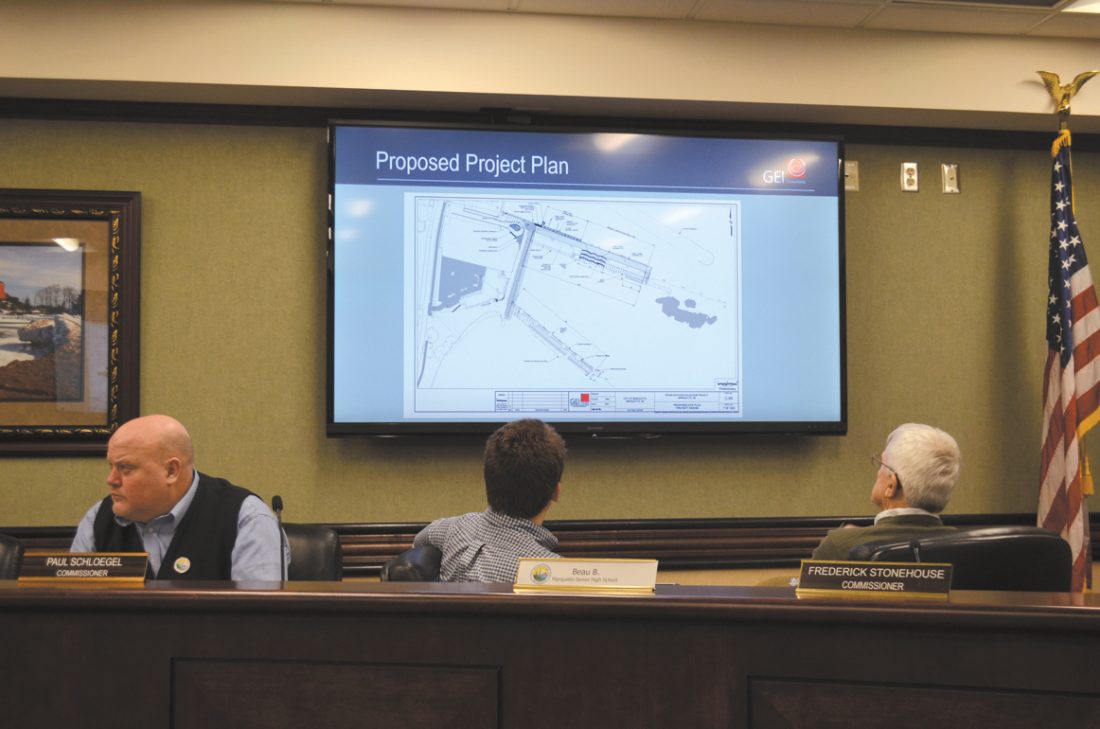 From left, Marquette City Commissioner Paul Schloegel, an unidentified Marquette Senior High School student, and Marquette City Commissioner Fred Stonehouse view a redesign of one of the proposed piers at Founders Landing. The commission at its meeting Monday night unanimously approved a redesign of the north pier in an aim to address permitting issues. (Journal photo by Jackie Jahfetson)

MARQUETTE — A redesign for one of the proposed piers at Founders Landing was unanimously approved by the Marquette City Commission Monday evening after feedback was gathered from the public and the Michigan Department of Energy, Great Lakes and Environment.

The city commission held a work session on the matter in December after the permit for the northern pier was placed on hold by DEGLE due to concerns about the proposed design.

Commissioner Frederick Stonehouse motioned to approve the revised design and authorize Marquette City Manager Mike Angeli or his designee to submit the permit to DEGLE, with Commissioner Paul Schloegel seconding the motion.

“As indicated earlier, there was a lot of great public input … It’s given us a good appreciation for what it is, how it’s going to be important to the value we’ve laid on Marquette,” Stonehouse said.

Officials believe that the updated design addresses the permitting issues.

The permitting concerns for the north pier involved the solid fill design for the pier’s footing and how that footprint might impact water quality, lateral flow and sedimentation, city officials said previously.

The redesign involves a wave eater buoy system This updated change along with the difference in width on the eastern end of the north pier — 33 feet wide to 25 feet wide — are a few revisions GEI Consultants have included in the proposed plan.

The main purpose of the project will largely remain the same, with a boardwalk, a winding pathway with seating areas, steel substructure, a solid eastern fill design and floating finger docks, officials said.

“It’s all still fully accessible. We’ve still got the — on the north side of the docks — handicapped accessible launch for kayaks and such there. Everything has (Americans with Disabilities Act) access onto it … I think we’ve been able to maintain most of the features we all really liked about it and worked on,” professional engineer George Meister of GEI Consultants said.

The redesign of the pier project is still within the $5.67 million budget.

Meister said he hopes that the structure’s redesign fits the qualifications for the permit from DEGLE and that with the commission approving the project, the plans can potentially be submitted to DEGLE this week.

The timeline for construction is still tentative, Meister noted, adding that he hopes they can begin work late spring or early summer.

The proposed pier project involves two piling structures from the Spear Merchant Dock complex that was built in the 1880s. The north set of piles is directly east of Baraga Avenue and the south set is east of the Hampton Inn.

“I think that this process is taking its due course for the permit process through EGLE. It gives the opportunity for public feedback, and there was some of that that was given. And I think it’s allowed us to regather our thoughts and really look at what is the best possible options for that are,” Marquette Community Services Director Jon Swenson said. “GEI has done a good job taking this whole design and looking at it from a little different angle … the end results for the community can be something that is along the lines of what got everybody excited about this project in the first place.”