Nickname issue not settled yet 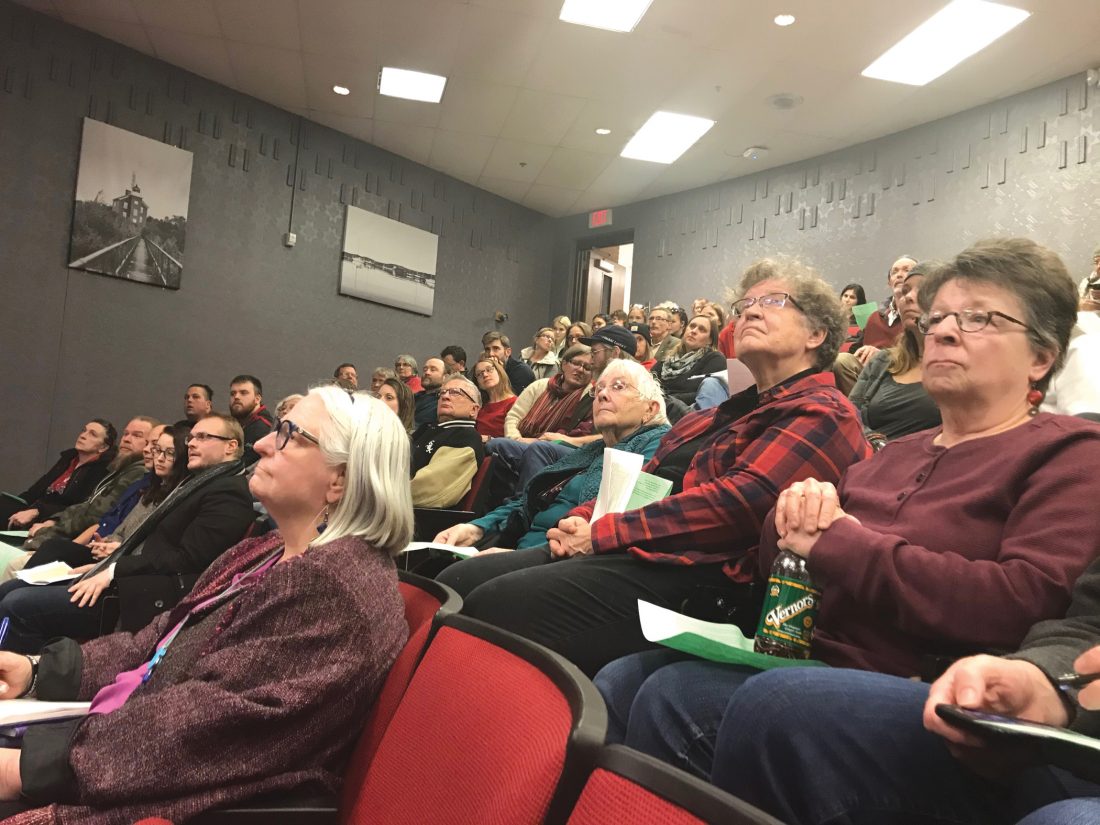 A crowd listens to discussion about the school logo at Monday’s meeting of the Marquette Area Public Schools Board of Education. The meeting took place at the Marquette Senior High School Little Theater. (Journal photo by Christie Bleck)

MARQUETTE — The Marquette Area Public Schools Board of Education on Monday voted to retire the Native American chief logo and formally adopt the block letter M as its logo, although the controversy surrounding the Redmen/Redettes nicknames is far from over.

The Native American chief logo had been phased out over the past two decades, but not in an official capacity.

The board also voted to move toward creating a committee to make recommendations on an “appropriate and respectful” way to retire the logo and recommend specific education and curriculum changes with respect to local cultural history.

For months, the board has been wrestling with the Marquette Senior High School Nickname Research Committee’s recommendation to cease the nicknames’ use, with the committee issuing a report at the Dec. 16 MAPS board meeting.

The community has been bitterly divided over the issue, which is separate from the logo issue. However, the two are connected. 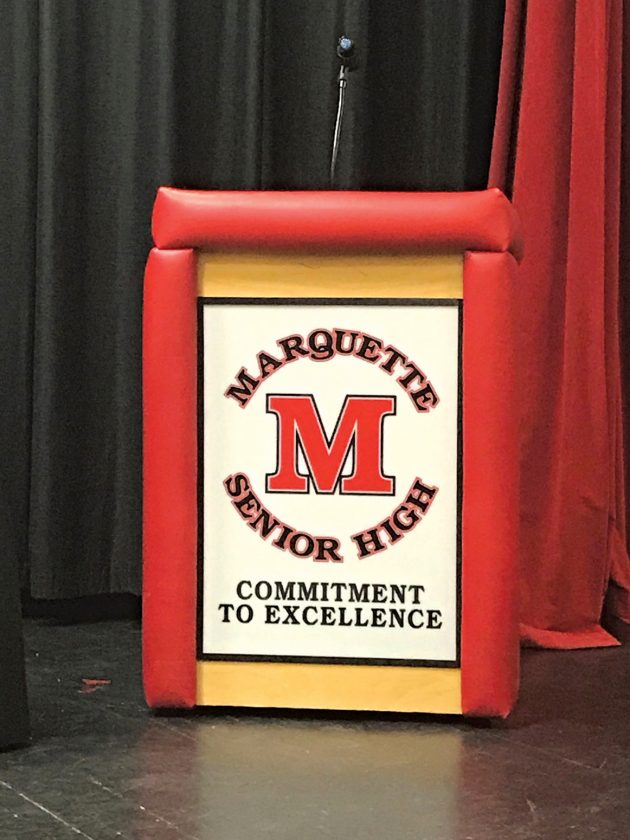 “We have to be honest with the public: A real outcome is certainly the potential to keep the nicknames Redmen and Redette,” said MAPS Superintendent Bill Saunders.

Saunders has pointed out repeatedly to the public that the name Redmen was derived from the red color of Harvard University, the alma mater of a former superintendent.

“For me, in order for that to really happen, the message I think our community has to understand — and where we have to go as a district — is we can’t do that under that native logo,” Saunders said. “That’s the piece where that native logo and that nickname become attached, where it does bring up the concept of this being a racial slur or this being culturally insensitive.

“It was never set out to be that way from the beginning, and the district has changed.”

Saunders said the native logo was introduced about 1940, about 10 years after the nickname Redmen began to be used.

“The spark that really set this off in October was not the name Redmen — and again, I think our focus perhaps was misplaced — but it was on the native logo coming in on those T-shirts,” Saunders said.

Before the vote, the board members gave their thoughts on the logo issue.

“I do think that if we mandate something either way at this point, it precludes us from having a discussion as a community about how we move forward as a community. And it seems to me we have an opportunity to think about that really deeply and how we move forward and what we’re going to teach our kids,” said Trustee Keith Glendon, who acknowledged being in the “camp” of changing the nicknames.

He also believes there will be blowback.

“I’ve already had many people tell me, ‘We’re going to vote no on any bond if you don’t support our way,’ and likewise, I’ve heard it from the other side too,” Glendon said.

MAPS Board of Education Vice President Brian Cherry stressed that Saunders has spent a lot of time on the issue.

“This decision isn’t going to occur in a vacuum,” Cherry said. “We can vote up or down one way or the other. That doesn’t mean it stops here. It means that other people are going to react and there’s going to be blowback one way or another.”

That could include board members being recalled or people running for four open seats on the board, he said.

Trustee James Randall said the board hadn’t imagined the controversy would be so polarizing.

Secretary-Treasurer Kristen Cambensy said it has been a “tough” couple of months, and she wants to see more education on Native American culture.

“I understand both sides of the issue,” Cambensy said, “and I hope that we’re going to be moving in a forward direction, whether that’s with the current name Redmen and a different image to hopefully rebrand, or completely rebranding it and going in a different direction.”

Trustee James Hewitt said the goal is to reduce bullying in the school district.

“We can keep that goal of maintaining a safe learning environment for every student,” Hewitt said. “It doesn’t mean it’s going to happen in reality and in practice every day.”

Trustee Glenn Sarka said the board will do its best to come to a compromise, but acknowledged it might not get there.

“We might not be able to get something that makes everybody happy,” Sarka said. “Our role as a board is to follow that mission statement.”

President Rich Rossway said he doesn’t want to act on the nickname issue.

“I would rather look at an educational component and a very robust one,” Rossway said.

He too foresees more discussion.

“Whatever we vote on, it’s going to be more and more of the same, and I’m very concerned of that,” Rossway said.

Community members spoke before the vote as well.

Marquette City Commissioner Andrew Lorinser, a 2003 alumnus of MSHS and a student at Northern Michigan University’s Center for Native American Studies, said: “If the next steps require compromise of indigenous integrity, none of us move forward. So which values must we abandon for compromise? Where does our compassion end? Does it end at preserving school tradition? Do principles end with popularity?”

Bob Wilkinson, a 1972 MSHS alumnus, said, “If you focus on oppression and victimhood, that’s not going to get you anywhere.”

He said he loves the logo and the name and wants to see the heritage upheld.

“What we need to focus on is educating ourselves to be the best people we can be,” Wilkinson said.

The board also directed Saunders to work on developing a community survey on the issue.

A crowd listens to discussion about the school logo at Monday’s meeting of the Marquette Area Public Schools Board of Education. The meeting took place at the Marquette Senior High School Little Theater. (Journal photo by Christie Bleck) 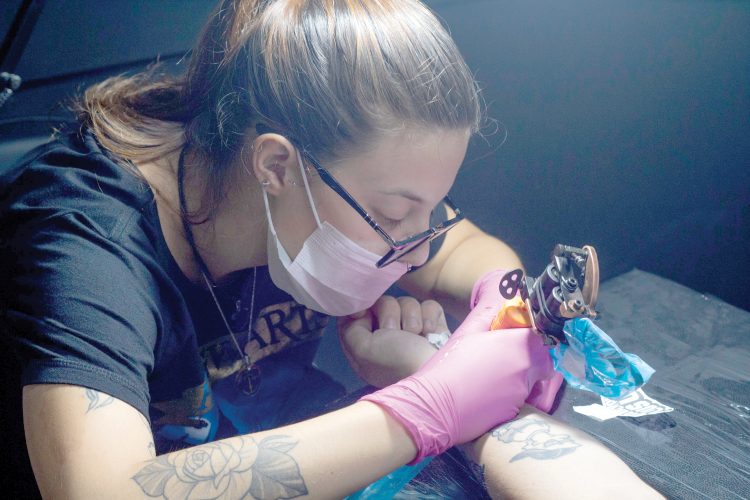