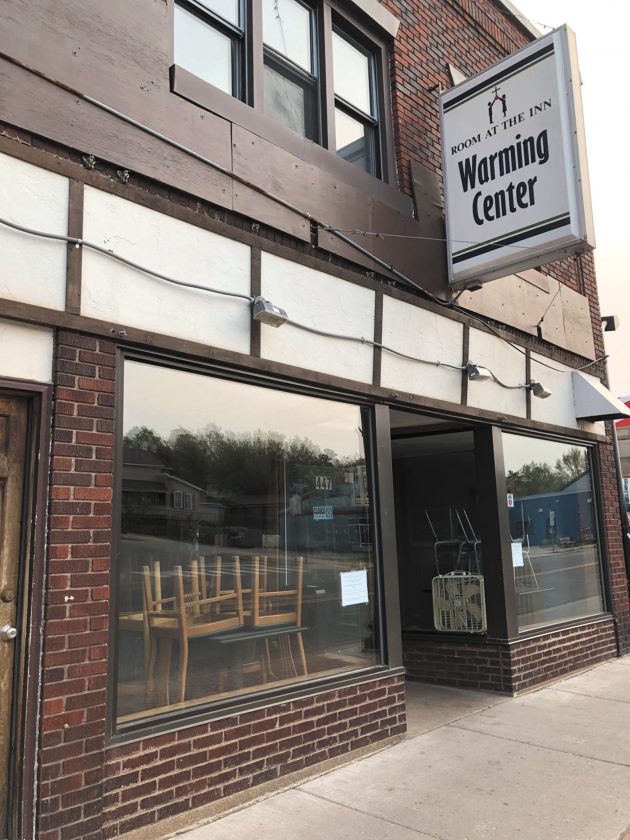 The Room At The Inn Warming Center is seen at its location on Washington Street. Plans to turn the third-floor residential unit above the Warming Center into a permanent emergency shelter are underway. The next step in the proposed project is obtaining a permit from the City of Marquette and then applying for funding. (Journal file photo)

MARQUETTE — Plans for a permanent emergency homeless shelter in Marquette are underway.

At a January meeting of the Marquette Downtown Development Authority, Room at the Inn Executive Director Nick Emmendorfer presented a proposal for the permanent shelter to be housed in the Room At The Inn building.

The current model requires the homeless population to rotate between nine area churches and move overnight locations each week.

“The idea behind the project of building a permanent shelter is that having a permanent shelter is the first step in any community’s effort in ending homelessness,” Emmendorfer said. “You need to stabilize people and the emergency shelter is analogous to the emergency room for medical health. You take people in off the streets and you get them stabilized and ready for long-term care. That’s exactly what this shelter is designed to do: to take people off the streets and stabilize them to prepare them, so we can transition them out of homelessness, which is our mission.”

The proposed plans include turning the third floor-residential unit of the building owned by RATI into a 24-bed or 12-bunk bed, year-round facility. The lower level would be used as an overflow sleeping space.

The goal is to have the shelter qualify for the Emergency Shelter Funding Program run by the Michigan Department of Health and Human Services and the Salvation Army, which would provide $18 of funding per person, per night for up to 90 nights, Emmendorfer said.

RATI currently shelters an average of 20 to 25 guests each night and serves an average of 1,600 meals per month. The proposed shelter plan would accommodate no more than 30 guests and the shelter would be staffed for all hours of operation.

By housing the Warming Center and shelter space within the same building, RATI staff can more easily case manage the guests, Emmendorfer said.

“Part of the effort here is to centralize all the services RATI provides under one roof, which from an administrative standpoint, case management all becomes easier on us and in turn makes the guests’ life a lot easier not having to pack up at the end of every week and move their whole life to a new church. They can do it all under one roof,” he said.

A permanent shelter location would also relieve the area churches that have provided overnight accommodations for the homeless population, he added.

“One reason that we’re making this move is the churches stepped up in this community to identify the unmet need of providing shelter for the homeless community. And over 13 years, the church population — as wonderful as they are– is being reduced in numbers, in the size of volunteers and church congregations and also the population is aging out. And on top of that, the church crowd does not have proper training required to adequately run an emergency shelter,” Emmendorfer said. “With the churches wearing out of the model, it only makes sense that RATI comes and finds a more appropriate way to provide shelter in the community which would be this permanent shelter.”

Visibility of the homeless population would decrease with a permanent shelter location, he explained, as guests would no longer have to leave the Warming Center at 8:30 each night to walk to the churches. Guests would still be required to stay inside the shelter after 6 p.m.

“We’re already there during the day and part of the night as is, now just let us sleep there,” Emmendorfer said. “They’re already there, you don’t notice because they’re required to stay in till the shelter opens. There would be no more visibility of the homeless because of this.”

RATI wants to help promote a positive atmosphere in downtown Marquette and a permanent shelter would help to do so, he said.

“The homeless community in any city will gravitate to the downtown area because that’s where the resources are,” he said. “We’ve demonstrated with data collected from the Marquette Police Department that giving the homeless population a place to go reduces the burden on the public. And giving the guests an alternative to parks, libraries and all public places makes it so the organizations who are properly equipped and trained to help these people are the ones that have to deal with them and they don’t pose the burden on the general public.”

Emmendorfer also noted that the public often questions where Marquette’s homeless population is from. To the best of his knowledge, 70% of the population RATI serves in a year are from the Upper Peninsula and just 7% are from areas outside of the Midwest.

RATI is asking for the community’s understanding as they pursue this project, Emmendorfer said.

“Giving the solution to the city and the individuals of Marquette having to deal with the homeless population is simply giving them a place to go and there is no more clear answer for the city of Marquette than Room At The Inn,” he said. “We are the organization to do it, we have the trained personnel to handle it and we have the mission and the vision to go along with it.”

The next steps toward a permanent emergency shelter include RATI obtaining a permit from the city of Marquette for the shelter, which it has applied for. Applying for state funding and organizing an additional funding source such as a capital campaign will follow.

Those with questions or comments about the proposed permanent shelter can contact Emmendorfer by emailing roomattheinned@ gmail.com.