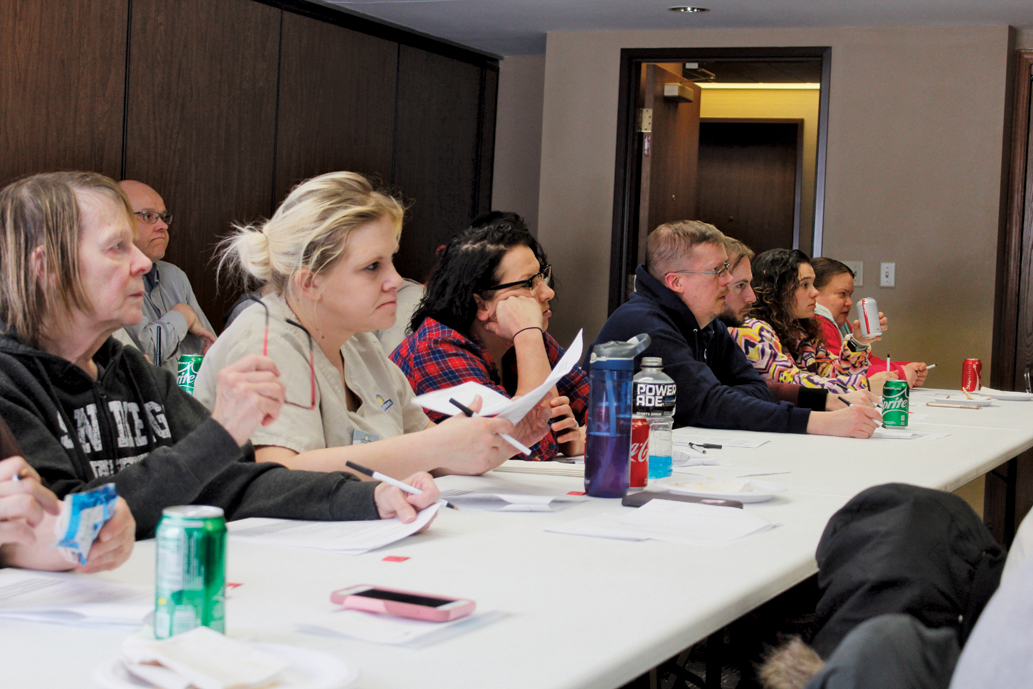 Superior Oasis employees from Comfort Suites, Days Inn and My Place Hotel watch human trafficking training videos during their staff meeting Monday. The training, called “Inhospitable to Human Trafficking” is provided by the Business Ending Slavery & Trafficking Alliance and is meant to help hospitality staff identify victims of trafficking and train them to implement practices that prevent the sexual exploitation of chidren and women in hotels and motels, the BEST Alliance website states. (Journal photo by Trinity Carey)

MARQUETTE — As of 2018, human trafficking cases reported in the U.S. totaled 10,949, with 51,919 total cases since 2007. Michigan ranked in at No. 6 in 2018 for the highest trafficking rates reported by state, according to the National Human Trafficking Hotline website.

Human trafficking is the use of fraud, coercion or force to obtain some form of labor or commercial sex act such as pornography or prostitution.

The BEST Alliance training videos noted that hotels are the primary location for commercial sex to occur, making it especially important for hotel staff to be aware of the signs of trafficking, said Brian Jensen, director of operations for Superior Oasis.

“There’s not much of it that goes on that doesn’t involve a hotel at one point or another. I mention that I had only had a couple experiences of it in my 45 years of managing, but that may be because I was naive at the time,” Jensen said. “This is something that in this digital age with online solicitation and everything, it’s happening everywhere. Just because we only have 300,000 population doesn’t mean this isn’t happening in this area. Always, there are people having trouble making ends meet and getting victimized into this kind of thing too. It’s a very difficult thing to think about. I’m glad we live in kind of an insulated community, but we aren’t as insulated as we think.”

Through the training, staff was made aware that sex trafficking can happen to both children and adults, as most involved in the act are likely trafficked into prostitution at a young age and it’s very difficult to leave. A BEST Alliance video noted that the average age of entrance into prostitution is 14 years old and an international study found that 89% of prostituted people said they wished to get out of prostitution.

A law enforcement officer stated in a training video that formerly officers focused on arresting prostitutes, but have, over time learned that they are not criminals but victims of exploitation who need help. Law enforcement shifted their focus from those being prostituted to those soliciting sex workers as buyers are responsible for creating the demand.

The training material outlined three potential risks for hotels involved with human trafficking: a reputational risk for being implicated in criminal activity; the risk posed to guests, employees and other innocent bystanders who may be harmed by the criminal activity; and potential civil liability such as the damage done at a hotel.

Hotel staff including housekeepers, front desk agents and maintenance staff were asked to be on the lookout for these possible indicators of human trafficking:

≤ A lot of traffic to one room

≤ A patron with a minor who appears to be unrelated

≤ A patron bringing unknown guests to their room

If a staff member notices any of these signs or suspects an instance of human trafficking they were told not to intervene for their own safety, but to immediately contact a manager as every second could count for a trafficking victim. Managers are to then contact law enforcement and provide as much detailed information as possible about the guests such as I.D. and license plate information.

Lee Brown, general manager of My Place Hotel. said he felt it was important to train Superior Oasis staff after he received the training at a hospitality convention.

“It really was impactful. It’s an issue you don’t really encounter in Marquette. so you don’t think it’s there but it can be. And I think it’s important that on the front line all of us try to take the opportunity to recognize the signs, recognize the indicators and prevent it from happening or getting bigger,” Brown said.

It was important to Brown that the entire staff received the Inhospitable to Human Trafficking training, he said.

“Sure we could have just certified our management team but … we’re not always on the front line. It’s our desk agents, it’s our housekeepers, it’s our maintenance staff, they’re the ones who are going to see it the most and they’re the ones we’re counting on to take care of our guests in every way including this.”

Information on human trafficking and its potential signs can now be found in each of the Superior Oasis hotels for staff to review at any time. Brown hopes to keep all staff up to date with the training and implement it into the hiring process.

“Our hotels, the Comfort Suites, Days Inn, My Place Hotel, we’ve been operating for years under these best practices — getting names at check-in, not accepting cash, keeping an eye out for any suspicious behaviors — But knowing that this also plays a roll in preventing human trafficking, it’s important to our team, it’s important to society because hotels are that first line, it’s where you’re going to see it and if we can stop one person it’s all worthwhile,” Brown said.