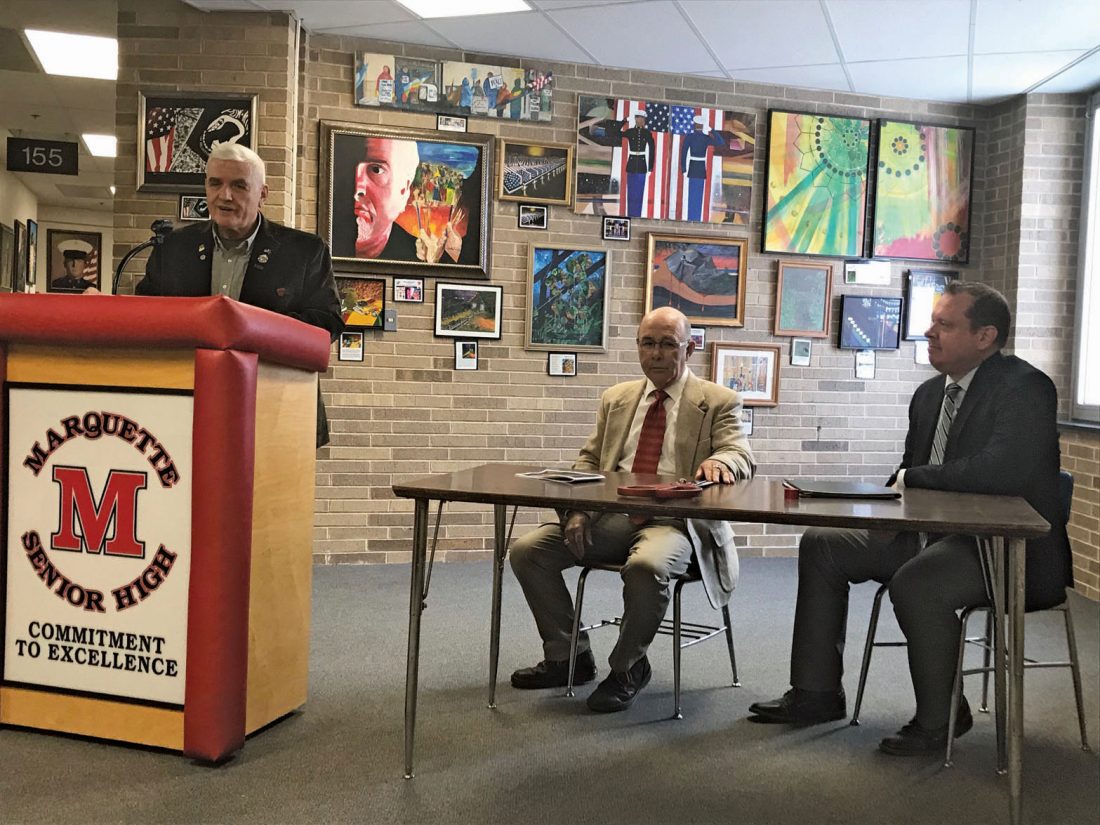 Steve Wahlstrom, left, speaks at Monday’s dedication of the Vietnam Veterans Portrait Gallery in the Fredeen Art Gallery at Marquette Senior High School. With him are Robert Mercure, center, who was instrumental in bringing the art to MSHS, and MSHS Principal Jon Young. (Journal photo by Christie Bleck

The new artwork was painted by local artist Steve Wahlstrom, who created the pieces after he returned from the Vietnam War.

“I can’t think of a better day to dedicate this exhibit than today,” MSHS Principal Jon Young said Monday.

Wahlstrom said he wanted people to dwell on the war and its warriors, who he stressed served with honor.

“I wanted people to be aware and at least provoke a question here and there, or at least a conversation, about this war, which was surprisingly quiet to me when I got home other than the protesters, who protested us,” he said.

Leading the endeavor to bring the Wahlstrom artwork to MSHS was Robert Mercure, a retired educator who also serves as a docent at the Marquette Regional History Center.

Mercure said he had wondered what happened to portraits of Vietnam veterans that hung in the now-closed Wahlstrom’s Restaurant in Harvey, which Steve Wahlstrom owned.

After contacting Wahlstrom, he learned the artist was in favor of putting them on public display. Mercure said he eventually contacted Marquette Area Public Schools Superintendent Bill Saunders, who agreed with donating the artwork to the school district.

It was not a difficult sell.

“This has been the easiest task I’ve ever taken on,” Mercure said.

There also was a legacy aspect to it as well as the artistic quality.

“I said, ‘Vietnam veterans are probably the grandparents to most of the students in the building,'” Mercure said.

He acknowledged the Vietnam War was controversial during his high school and college years, and recalled that the soldiers who came back from World War II and Korea were treated with honor and respect.

That didn’t happen with the Vietnam vets.

“Guys I didn’t even know weren’t given that same kind of respected welcome when they came home,” Mercure said.

Wahlstrom found a way to give his respect through art.

“I decided to paint them just to honor these guys,” Wahlstrom said. “It was something I could do to give some recognition to what they have done for all of us, and I’ve walked in their shoes, and I know their struggles and I know they’re still dealing with it all — and I know they always will, and they’ve learned to cope to a certain degree, because I have.

“But it’s all in there, and the triggers are still there.”

He said when he started the paintings, he considered what was going on in the veterans’ heads as well as their experiences.

Some paintings are portraits while others depict their inner battles, Wahlstrom said.

“I started painting them from the inside out, I guess,” Wahlstrom said.

The artwork could trigger strong reactions from viewers, even if they aren’t veterans.

Whatever emotions the artwork provokes, Wahlstrom’s emotions now are part of the gallery.

“I painted them for me,” he said. “Now my heart’s on my sleeve, or on the wall, and I guess from the comments I’ve heard, I guess it’s OK.”