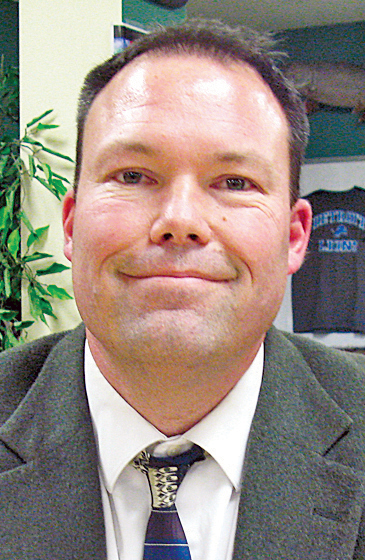 MARQUETTE — The issue of being sensitive to the Native American community is being examined in Marquette Area Public Schools.

The topic has been simmering for years in the school district.

“Really, what we’ve focused on, probably the last 12 to 15 years, is moving back to the origins of the nickname,” MAPS Superintendent Bill Saunders said in a Friday interview with The Mining Journal.

The Marquette Senior High School nicknames are Redmen and Redettes, with some Native American students continuing to express their concerns.

For instance, at the Nov. 5 Tom Baldini Soapbox Showcase at Kaufman Auditorium, the winner, MSHS student Roxy Sprowl, said in her speech that she had yet to see a textbook representation of a Native American who looks like her.

Saunders addressed the issue and gave a brief history at the Oct. 21 MAPS Board of Education meeting.

He said Willard M. Whitman, a Harvard graduate, was hired in 1920 as MAPS superintendent. In the early 1930s, Marquette’s sports teams became known as the Red Men. Student-athletes wore sweaters with a large block “M” with the school colors and nickname likely coming from Whitman’s alma mater.

Over the last 10 years, the MAPS district has worked to rebrand itself and revert to the era before the adoption of the Indian chief mascot logo.

Saunders said at the board meeting: “Questions everyone may want to see answered are those such as: Is the nickname culturally insensitive? Is the nickname the same source of pride for our Native students and families as it is for others? Is the nickname adversely affecting the education for any of our students?”

He said the last time the district conducted a thorough review of the nickname was in the 1990s, and the community had polarizing opinions that still are evident. So, challenges remain.

“We do time to time, especially during homecoming, find some things — that students are looking for school pride,” Saunders told The Mining Journal. “What is our mascot? What are we, as they’re playing another team and developing floats, not really having that identity. That’s certainly an issue.

“I also feel like that’s probably the biggest time when we’re trying to show school spirit, that maybe all of students don’t know how to show school spirit in a politically correct-type fashion, right? So, they may do some things that are seen as offensive to our Native American population.”

Saunders, who said the district wants to do its due diligence on the matter, said it decided to look at the issue again, tasking a group of community members to research and investigate whether the nickname adversely affects the education of MAPS students.

That committee is expected to report its findings to the school board at its regular meeting on Dec. 16.

“I have always said, ‘Every Indian child should have the ability to receive a quality education as everyone else,'” Swartz wrote. “When there are these racism and mascot issues in the schools, the people tend to crawl into a little shell; we have all been through that.”

He also noted funds are available through the Native American Heritage Fund, which have been successful in removing some mascots in Michigan.

According to the Oct. 21 board meeting minutes, Swartz indicated it was important to put timelines on removing the nickname and mascot.

Also at the meeting, MAPS Board Secretary-Treasurer Kristen Cambensy acknowledged the issue has been a divisive one in the community for some time, and the district needs to have more education and dialogue with students and the community at large.

Local businesswoman and MSHS graduate Jennifer Ray, co-owner of Donckers and the Delft Bistro, spoke in favor of changing the mascot at Monday’s board meeting.

“We need this not only within our community, which is an incredibly strong, welcoming, kind, supportive community, but within our country,” Ray said, “and we know that we’re at this point where we have lots of things that we have done and changed, and I’m encouraged by the change we’ve made, but we know we have a long way to go and this is part of that path that we are on.”

Sprowl expressed her appreciation on Monday for the progress the district has made, although she has seen “implicit and explicit” images that takes away from her learning experience.

“Not everybody’s education has been maximized,” she said.

Saunders on Monday said the district mailed a letter to parents last Friday so the committee can receive input on the issue.

MSHS student Anna Wheeler recently sent a letter to The Mining Journal to express her concerns.

Wheeler noted that on Oct. 4, her classmates decided it would be appropriate to create their own senior shirts with the Native American icon wearing a headdress. She wrote that she came to school excited about participating in homecoming activities, but after seeing the first shirt with her culture “plastered all over it,” Wheeler knew she wouldn’t have much school spirit anymore.

“I feel discriminated against because I shouldn’t have to walk down a hallway and see my ancestor’s face on a shirt worn by a student that doesn’t even want to understand our culture and how important the headdress is,” Wheeler wrote. “If someone can wear war paint and wear shirts that represent me, they should have to respect my decision to be offended by it.”