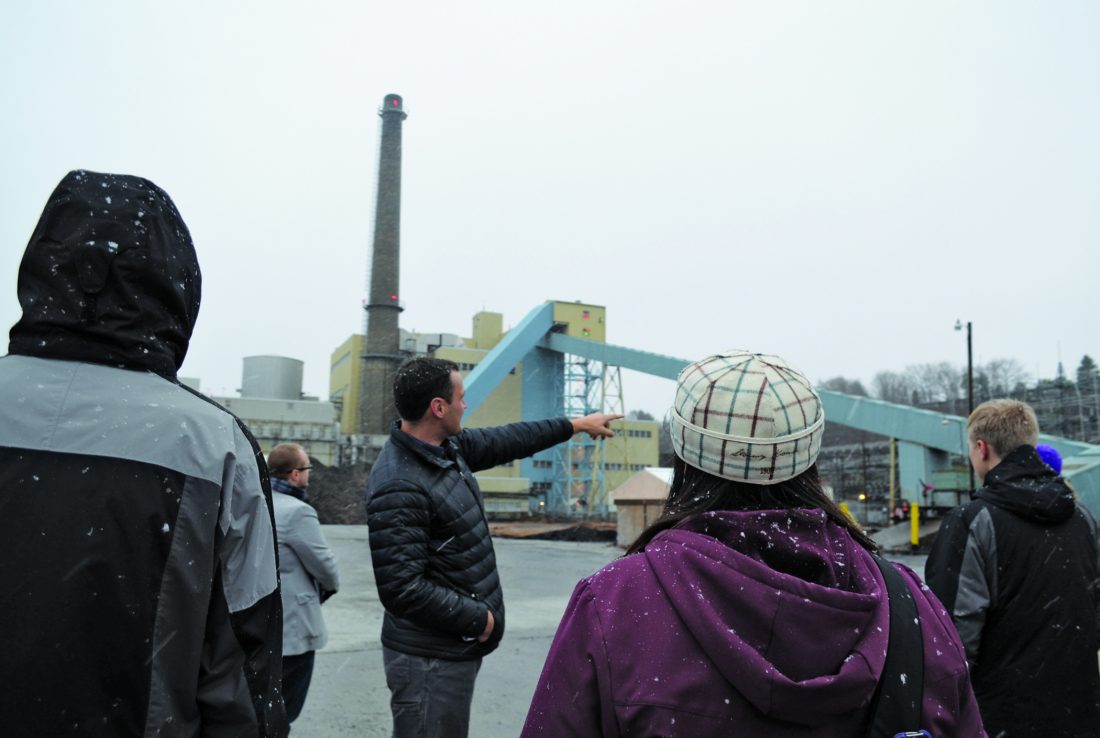 Marquette City Commissioners and the Marquette Board of Light and Power’s Board of Directors tour the site of the BLP’s retired Shiras Steam Plant Thursday prior to a joint work session on the matter. The two entities discussed plans for decommissioning and demolishing the power plant, as well as the future of the site itself during the work session held on Thursday:

MARQUETTE — The era of coal-fired power plants came to an end in Marquette as the last bits of coal were burned at the municipally owned Shiras Steam Plant in June 2018, the last remaining plant of its type in the city.

With the end of an era, many are discussing what a post-coal future might look like for the city of Marquette and its lakeshore.

The topic was discussed Thursday when the Marquette City Commission and the Marquette Board of Light and Power’s Board of Directors met for a joint work session to discuss the fate of the Shiras Steam Plant and the surrounding area.

The seven-story Shiras plant, a coal-fired electric generating station owned and operated by the BLP, served the area for over 50 years before it was placed in layup status in June 2018, and officially retired in March.

The BLP now uses its Marquette Energy Center — which is primarily fueled by natural gas — and electric grid markets overseen by the Midcontinent Independent System Operator to replace the power generated by the coal-fired plant, as it was projected this could save around $100 million over the next two decades.

Since the plant was retired, the BLP has been planning for the eventual demolition of the Shiras Steam Plant, which officials expect to take two to three years.

“Five years ago this was probably a dream for most of us, that we’d be talking this soon about the Shiras being shut down and ready to be demolished,” BLP board Chairman John Prince said. “But here we are, good things have developed to allow us to do that.”

The work session kicked off with a tour of the roughly 20-acre Shiras Steam Plant site led by BLP Executive Director Tom Carpenter, who showed board members and commissioners what will be demolished and what will be maintained or reused.

The plant, associated conveyors, smokestacks and other buildings will be removed, but other portions of the site will remain intact, Carpenter said.

While the plant will be taken down, the site will remain under BLP control, he said. It consists of three parcels: one roughly 15-acre parcel that was deeded to the BLP by the state in 1964, as well as two smaller parcels that are used under bottomlands agreements with the state.

Carpenter said the fishing pier and access to South Beach at the site will remain public.

And while the site might look vacant right now, there are BLP employees who continue to work at the offices housed at the steam plant and there is also security on-site 24/7, BLP officials emphasized.

The site will also continue housing back-up generators and one of the BLP’s three electrical substations, Carpenter said, noting they plan to eventually build a new substation control house and a second 69-kilovolt interconnection to ensure energy reliability and redundancy.

Once the site’s ash settling ponds are remediated, the BLP hopes to turn the area into a ship mooring facility that could potentially be leased by other entities, he said.

The deepwater port used by Cleveland-Cliffs Inc. for unloading limestone will also be maintained, according to BLP officials.

Retaining these features will allow the site to continue generating revenue and recreation opportunities long after the plant itself comes down, Carpenter said.

However, Commissioner Fred Stonehouse raised concerns about the plans to continue using the deepwater port for CCI’s limestone shipments, citing input from residents who would like to see the area made into a green space, rather than continued industrial use along the city’s lakeshore.

Stonehouse and other commissioners also expressed concerns about potential risks to public health from blowing limestone dust, as well as the impact of large trucks carrying limestone from the dock at the Shiras site on city streets.

However, BLP officials said they hope to engage in community dialogue about the issue, noting long-term plans are not set in stone and determining future uses would be “an evolutionary process,” with the first priority being removal of the plant.

“Leaving (the port) there doesn’t mean it can’t be removed easily in the future, but it’s just for the short term … We want to get the plant down. We want to get it cleaned up,” said BLP board member Robert Niemi. “And then we can wait to see what opportunities might arise.”

BLP board members also emphasized the BLP receives needed revenue by allowing CCI to use the dock.

Furthermore, they said the deepwater port is a unique asset that could potentially bring other industries to town, as Marquette has the only deepwater port on the south shore of Lake Superior for hundreds of miles.

Commissioners also brought forward ideas on renewable energy generation opportunities at the site, citing its advantageous proximity to a substation.

“There are some incredible opportunities to reuse this space in a way that could really promote renewable generation across the whole Upper Peninsula,” said Commissioner Jenn Hill, who also serves on the state’s U.P. Energy Task Force.

An area resident present at the meeting suggested placing solar panels on the coal plant’s smokestacks, as this would be a renewable generation project with a “very minimal footprint.”

In terms of decommissioning, remediating and demolishing the plant and associated structures, the next steps involve hiring an experienced consultant.

The aim is to start the bidding process in the coming months, as this consultant will develop demolition specifications to be used in the selection of a demolition contractor, Carpenter said.

The demolition cost can be covered by funds that were set aside for the maintenance and repair of Shiras Steam Plant, BLP officials said. There’s also a chance that selling material and equipment within the plant could help further offset the cost, Carpenter said.

Overall, board members emphasized the BLP is aiming to take the plant down as soon as it can in a safe, environmentally-responsible manner.

“We really want to eliminate that responsibility and liability for all of us,” Prince said. “And we also want the shoreline to be as clean and pristine as it can be.”

But long before area residents see a change in the plant’s exterior, a great deal of work will take place inside the plant, Carpenter said, noting it will involve about six months of asbestos removal, as well as “many months of equipment removal.”