Many come together in support of local battery recycling program 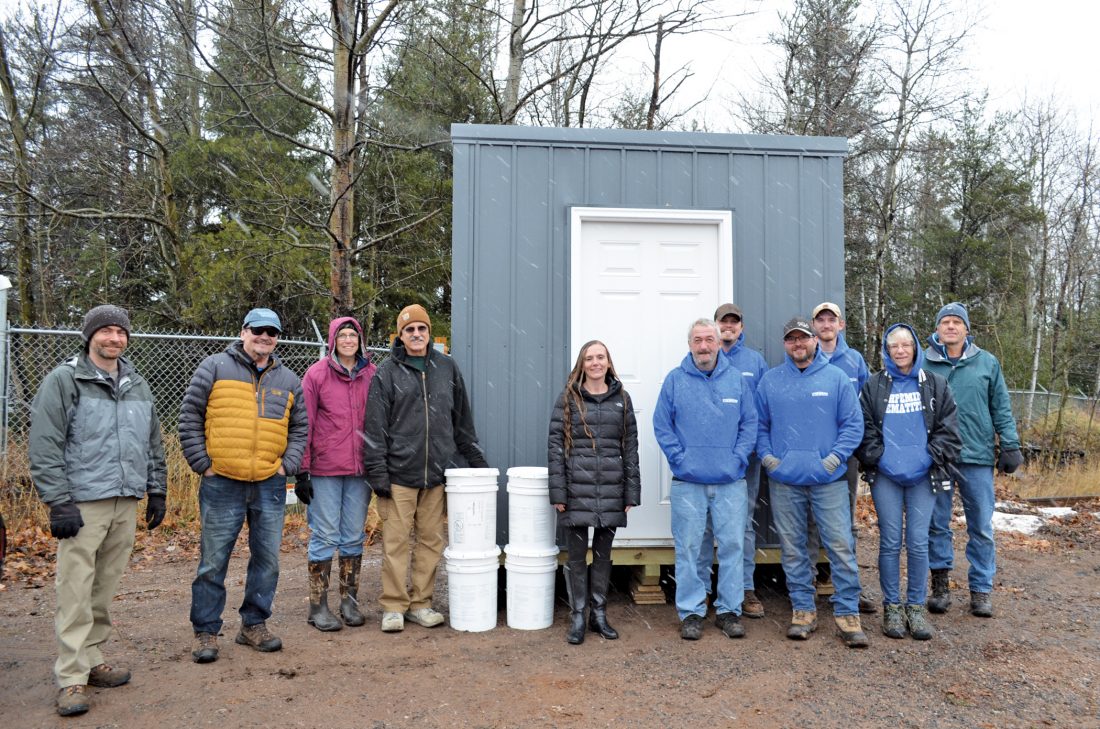 Members of the Battery Recycling Committee of Marquette stand in front of the committee’s new battery storage shed at the Marquette Household Rubbish Site with representatives from Premium Sheds and the Yellow Dog Watershed Preserve. Premium Sheds constructed the shed and contributed to the funds raised for its construction, organizers said, noting they are also grateful for the donations from the Yellow Dog Watershed Preserve, the Superior Watershed Partnership and many area residents. The Battery Recycling Committee of Marquette collects hundreds of pounds of batteries each month from drop-off locations in the Marquette area in an effort to keep batteries out of landfills, organizers said. (Journal photo by Cecilia Brown)

MARQUETTE — In the decade since it began, the Battery Recycling Committee of Marquette has literally collected tons of batteries in an effort to keep them out of landfills, but as the program has grown, the need for battery storage space has also expanded.

Due to this, many banded together and raised funds for a new shed designed to store the hundreds of pounds of batteries that await recycling after collection from drop-off sites.

The shed, built by Marquette County-based Premium Sheds and located at the city of Marquette’s household rubbish site, was officially unveiled on Thursday, with many of the individuals who made the project possible in attendance.

“It feels wonderful to have this,” said Maura Davenport of the Battery Recycling Committee of Marquette. “And I think the reason it’s so wonderful is because a lot of us came together — worked together, raised money, volunteered — and now we have a place to store our batteries.”

It’s critical to offer area residents a way to recycle batteries, she said, as batteries contain a number of heavy metals and toxic chemicals that have the potential to contaminate water and soil.

The group required a shed, Davenport said, as they need a place to store the collected batteries while they await pickup by personnel from the Marquette County Solid Waste Management Authority, which sends the rechargeable batteries to Call2Recycle and all others to Battery Solutions in lower Michigan.

The batteries were previously stored in the garage of the Peter White Public Library, said John Mallo, who helped with fundraising efforts for the shed and is a member of the PWPL Board of Trustees. However, with 400 to 600 pounds of batteries being collected each month, the group was running out of space.

“We were storing all of the batteries in the library garage and we were starting to outgrow it,” Mallo said. “So as the batteries were piling up there and we’d have to keep moving them around, we thought it was a good start, but we need a dedicated space all to ourselves. And so then the program got so successful, we’re keeping 4 tons of batteries annually — 4 tons that don’t go in the landfill.”

It took many people and entities to raise the funds, organizers said, as the shed was purchased with donations from the Superior Watershed Partnership, the Yellow Dog Watershed Preserve and a GoFundMe page created by Mallo. Premium Sheds also contributed to funding the shed, organizers said.

“Anytime you can do something to help out in the community, it’s important to,” said Jared Manier of Premium Sheds.

The committee is also grateful for the city of Marquette allowing it to use the space at the rubbish site for the shed, as well as the previous use of storage space at the library, Davenport said.

The battery recycling committee began in 2009, with the support of a grant from the Community Foundation of Marquette County obtained by Emily Whitaker of the Yellow Dog Watershed Preserve, Davenport said.

The committee started small, with three members — Whitaker, Davenport and Jo Foley — who went to battery drop-off sites in the community and collected batteries. However, it has grown greatly since then, as the group now has seven volunteers: Foley, Davenport, Mallow, Joe Neumann, Chuck Norlin, Carla Champagne and Michelle Lexmond.

“It certainly would not have happened without all of the dedicated volunteers to guide the process,” said Neumann, who also works for Chocolay Township’s public works department. “And it’s just been tremendous, the successes we’ve been able to have because of the collaboration.”

To learn more about volunteering with the battery recycling committee, contact Davenport at 906-226-3900 or mhdavenport54@hotmail.com.