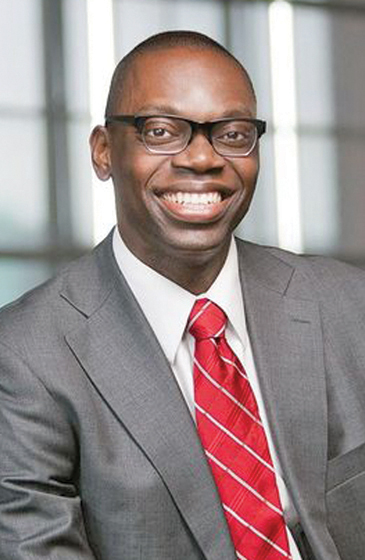 “As we govern we’re trying to make sure people know we’ll show up where they are so we can listen to them so we can understand what’s going on in different communities and we can be responsive to their needs, so this trip was a continuation of that,” Gilchrist said.

Gilchrist met with local stakeholders to discuss ways to improve the quality of life throughout the city.

“The conversations are really grounded in looking at five areas,” he said. “One is improving quality of life for kids in cities, creating generational economic opportunity, increasing access to affordable and available housing, increasing access to transportation and mobility services, and improving environmental quality and justice.”

During the roundtable discussion held at Northern Michigan University, local business and government leaders and university officials voiced their thoughts on what would help Marquette thrive. Ideas focused on various ways to spur economic development, such as programs to help start-up companies, easier access to day care and childcare services and improving access to high-paying jobs.

“There were a lot of good, concrete ideas,” Gilchrist said. “Those will be combined with the ideas we’re hearing across the state and we’ll be putting together a Thriving Cities agenda, if you will, that will consist of action that can be taken at the local level, state level or the federal level to improve the quality of life in Michigan.”

He said there are a few issues specifically facing the Upper Peninsula that must be improved, one being the access to broadband internet in rural communities.

“There’s been some innovation from Northern Michigan University through the Educational Access Network, and so looking at how we can support that kind of project and that kind of innovation to bring more connectivity to people,” Gilchrist said.

The innovativeness he saw in the U.P.’s universities and companies is what will propel economic development in the area, he said, and focusing on retention within the state will create the high-paying jobs wanted. Gilchrist himself left the state and headed to the West Coast to start up his software company.

“That does not have to be true today in the way that I perceived it to be true before,” he said. “If we create the conditions so that we’re going to be the right kind of partners to the state that we’re going to bring the partnerships together to support and invest in these Michigan businesses that can change the world, that will attract and retain ambitious people to create the high-paying jobs of tomorrow.”

Another issue facing the U.P. is the criminal justice system, which he is focused on reforming. Gilchrist is co-chairman of a pretrial incarceration task force that is analyzing those incarcerated, for how long, for what reason, etc.

“We have a lot of counties in the Upper Peninsula that have massively overpopulated jails and that’s a huge drain on the resources for those counties, but it’s also not serving the people who are locked up in these jails who really need access to mental health services, really need access to services for substance abuse disorder,” Gilchrist said. “This task force is seeking to understand how we can reduce or eliminate the money bail system so that people are not in jail because they can’t afford to get out and also how can we divert people away from jail and into programs that will actually help them with the challenges they face (so) they can get back on their feet and contribute to society.”

This focus on quality of life and safety of Michigan residents is why much of the 2020 Michigan state budget was vetoed by Gov. Gretchen Whitmer and Gilchrist, he said. Whitmer line-item vetoed nearly $1 billion from the budget and called for further negotiation.

“Unfortunately the budget that was sent to the governor and I was fundamentally flawed,” Gilchrist said. “It was a broken budget that was non-negotiating, so we had to take pretty strong action because of how bad they were. I mean, you had some very dangerous things that put public safety at risk specifically when you’re looking at things with the Department of Technology Management and Budget. Budget for that department was cut by the Republicans in such a way that it put our cybersecurity at risk. I’m talking specifically about the Social Security numbers of people who are accessing services from the state government. We’re at risk of being exposed.”

Action had to be taken in response to such risks to protect public safety and reopen discussion of the budget, he said.

Gilchrist’s U.P. tour will continue today with an Innovate Marquette SmartZone Tour at 1 p.m. He will also visit the Marquette Food Co-op at 2:20 p.m.