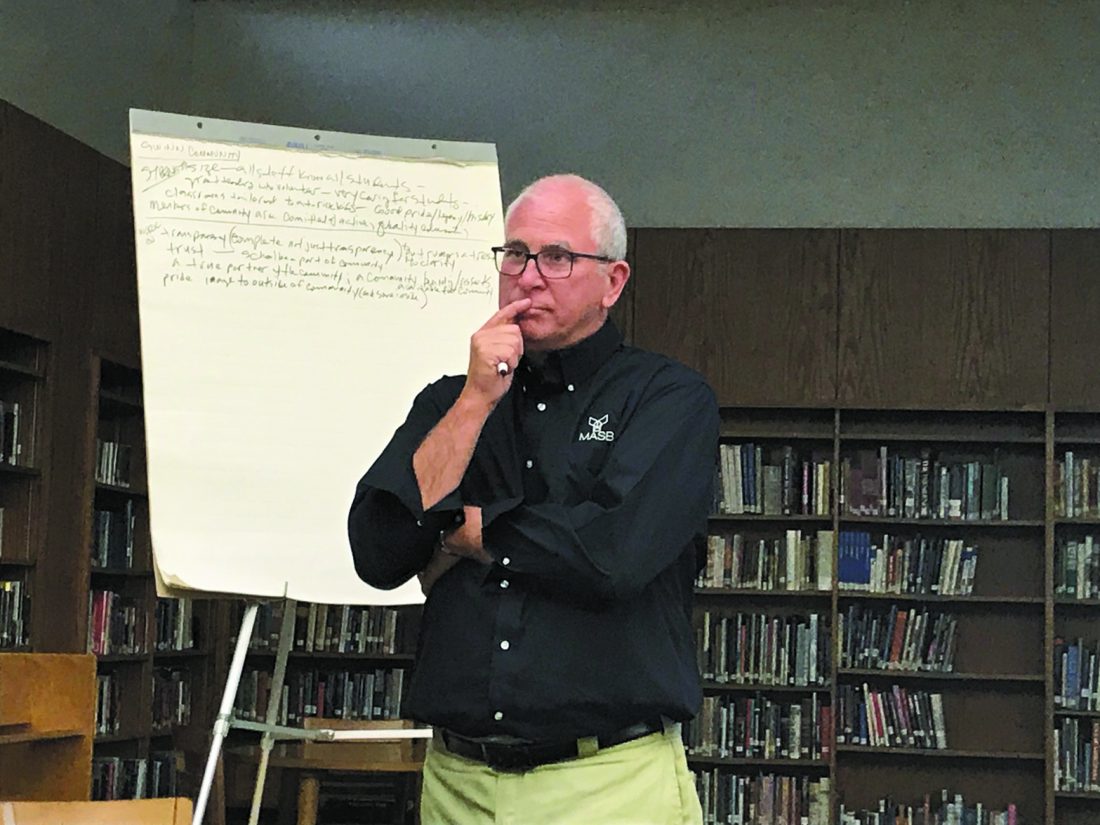 Richard Diebold, a consultant with the Michigan Association of School Boards, leads a strategic planning session for the public on Monday at Gwinn Middle/High School. Gwinn Area Community Schools seeks comments regarding the school district. (Journal photo by Christie Bleck)

GWINN — Community members in the Gwinn Area Community Schools district have the chance to provide strategic planning input about its future.

A public planning session took place on Monday at Gwinn Middle/High School to gather comments about GACS’s strengths, weaknesses, barriers to improvement and a vision for several years down the road.

An online survey also is available at the GACS website at gwinn.k12.mi.us under quick links.

Leading the session was Richard Diebold, a Petoskey-based consultant for the Michigan Association of School Boards, located in Lansing.

He said that last spring, the GACS Board of Education and Superintendent Sandy Petrovich began a visioning process for looking toward the future.

“There’s a variety of options that they can use and processes that they might want to take a look at,” Diebold said, “and being members of the Michigan Association of School Boards, they looked to the school boards association to kind of help them through that process.”

He said it’s still early in the planning process, but it will involve collecting stakeholder input and analyzing statistical data. A report will be generated, with other information, and used to help a district planning team determine its direction.

Voters in the May and August elections turned down requests from the school district for a levy not to exceed 1.75 mills, which is $1.75 on each $1,000 of taxable property value, for 10 years — 2019 to 2028, inclusive — to create a sinking fund for items such as the construction or repair of school buildings, school security improvements and the acquisition or upgrades of technology for the purchase of real estate for sites.

The school district has been digging its way out of a $406,000 deficit since June 2017 due to cautious spending.

The strategic planning timeline calls for stakeholder input as well as data collection and preparation to take place this month, with data analysis to continue in October.

A planning retreat and implementation workshop is expected to take place in November, with the school board receiving a final report in December or January.

“One of the things that’s a little different with this process than with other strategic planning processes is the step-by-step — these are the things that need to be done,” Diebold said, “and we’ll put that together for a period of one year.

The community members at the session provided their ideas for four categories, two of which were strengths and weaknesses.

Strengths included school size; good teachers, with one audience member noting they volunteer “all the time”; and the quality of education.

Areas for room for improvement included more transparency, such as putting rumors to rest; opening up the school as a community building; bettering the district’s image from the outside; infrastructure; and better communication since many people aren’t tech-savvy and don’t have easy internet access.

Listed as barriers to improvement included finances, a connection with people who aren’t parents of students, residents with no kids in school who didn’t vote for the sinking fund, a transient population and limited household income.

When asked about their vision for the school district and what it might look like in three to five years, the participants noted they want the district to be stable, both financially and with staff, although one audience member expressed her fear the district eventually might have just one K-12 building.