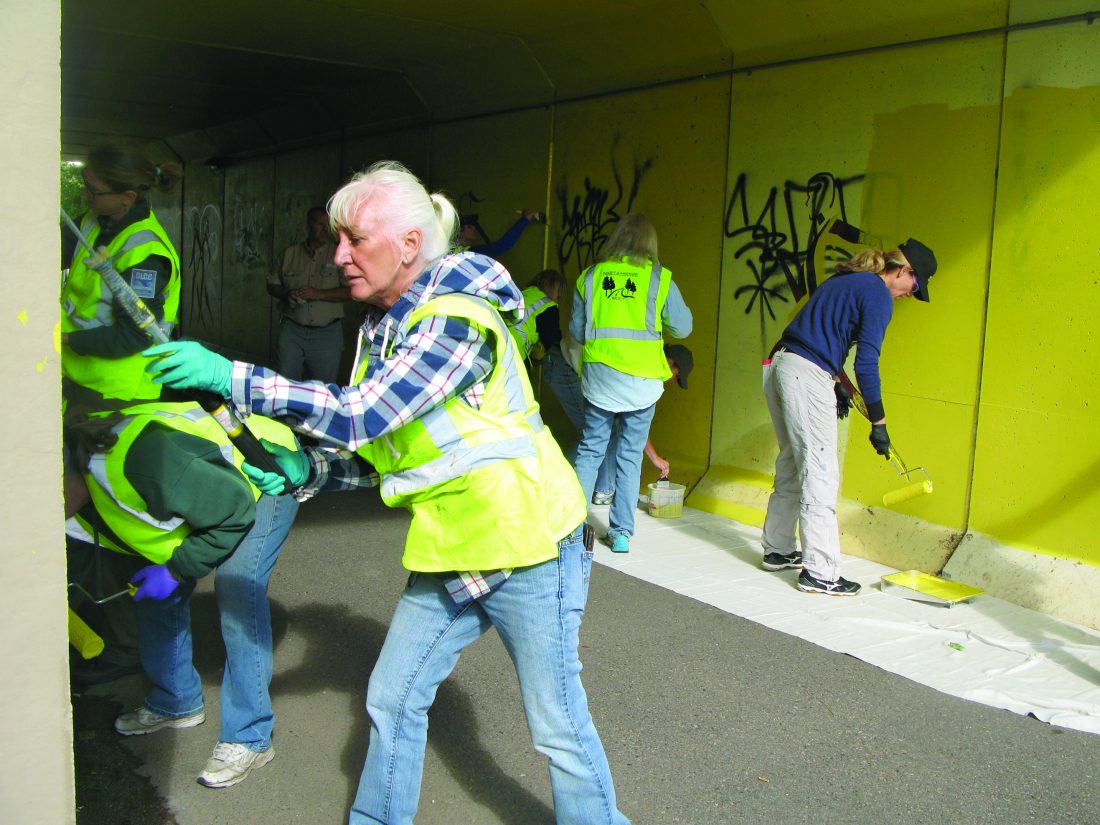 Dee Dee Larson of Marquette, left, along with members of the Marquette Beautification & Restoration Committee Inc., and the Great Lakes Conservation Corps, works to remove graffiti at the Seventh Street bridge in the city of Marquette on Wednesday. (Journal photo by Christie Bleck)

Dee Dee Larson of Marquette, left, along with members of the Marquette Beautification & Restoration Committee Inc., and the Great Lakes Conservation Corps, works to remove graffiti at the Seventh Street bridge in the city of Marquette on Wednesday. (Journal photo by Christie Bleck)

Committee members prepare to take on the grafitti. The effort is part of the group’s new Project Sparkle. (Journal photo by Christie Bleck)

MARQUETTE — Perhaps the people who draw graffiti on city property are frustrated artists with no outlet for their creativity other than a stop sign, or they have a disgruntled message for the world they need to express on a cement wall.

Either way, eradicating local graffiti is the focus of a new initiative of the Marquette Beautification & Restoration Committee Inc., titled Project Sparkle.

Members of the MBRC and the Great Lakes Conservation Corps, run by the Superior Watershed Partnership, met with city officials Wednesday at the Municipal Service Center to discuss how to proceed with the project.

“The community’s reaching its limit on what they’ll put up with,” said Kay Angeli, one of the MBRC volunteers.

Wednesday’s session served as a primer on graffiti removal from city officials, who provided a few tips to volunteers on what and what not to do. 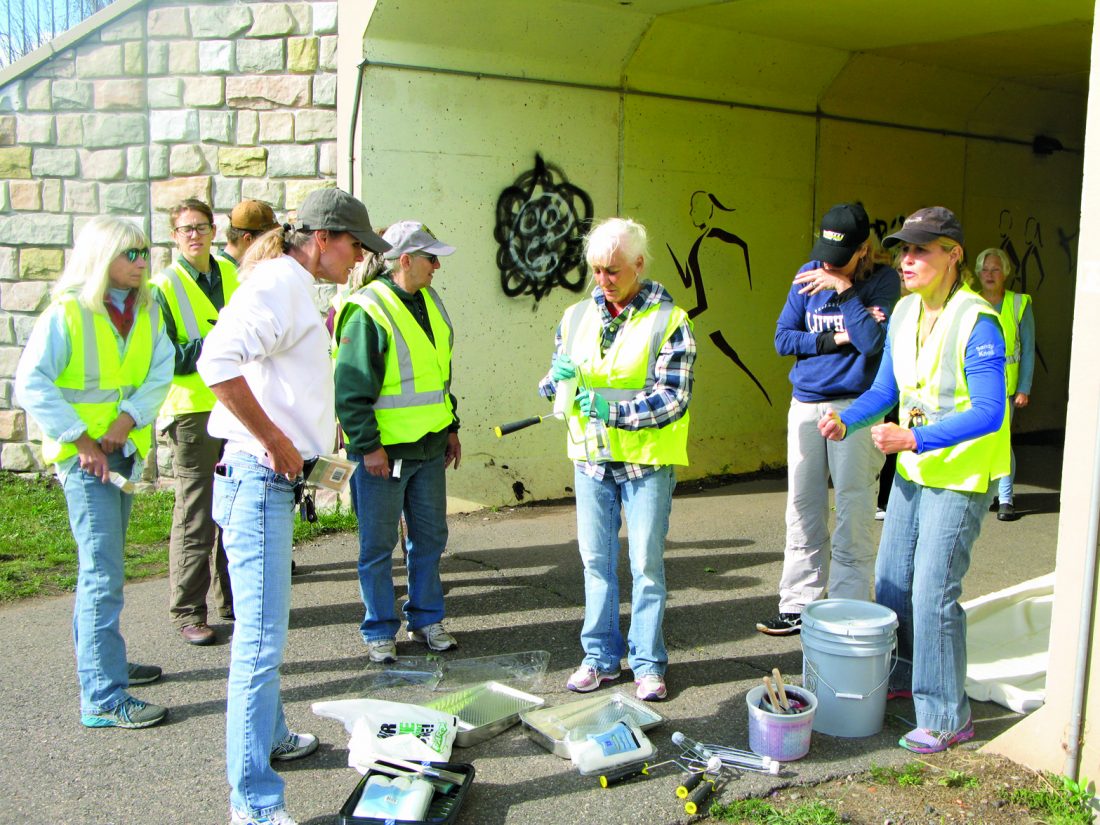 Committee members prepare to take on the grafitti. The effort is part of the group’s new Project Sparkle. (Journal photo by Christie Bleck)

For example, Tom Florek, facilities maintenance supervisor for the city, advised against removing graffiti from the front of a stop sign and similar signs.

“Those cannot be cleaned,” Florek said. “Those all have to be changed. Anytime you put the chemical on there, it takes the reflective coating off, and we don’t want that to happen.”

Cleaning the backsides, though, is OK.

“Some applications work and some don’t, so you’re trying to find the chemical, the remover, that works with the application,” he said.

Locations mentioned as needing graffiti removal in the city included the Williams Park playground, a wall along Fourth Street near Washington Street, and power boxes.

Of course, there are challenges depending on the site.

“We tried to do Mount Marquette last year — the rocks and the handrails and all that stuff up there,” Florek said. “The problem is it’s something in that rock. It was so hard.”

So, efforts involved the use of a pressure washer and repeated scrubbing.

“I think nature took its course and took most of it off, people walking,” Florek said.

One bridge that received attention on Wednesday was the Seventh Street bridge, with volunteers adding yellow paint to the tunnel section that runs over the multi-use path.

Other anti-graffiti action already had been taken in Marquette, with a particularly disturbing incidence noted earlier this summer when a swastika was painted on a station at the Fit Strip near Park Cemetery.

That graffiti has been removed, Florek said.

Restitution will be used in the city’s fight against graffiti.

“People being convicted, we’re going to put them to work,” he said.

The MBRC is partnering with the city of Marquette, the Marquette County Sheriff’s Office, the Marquette Downtown Development Authority, the Superior Watershed Partnership and Northern Michigan University in Project Sparkle.

According to the MBRC, graffiti has been documented to lower property values, bring more crime, discourage businesses and homeowners from locating in graffiti-marred places, and create a deception of decline. It also can be a misdemeanor or a felony depending on the amount of damage and removal costs, crimes that carry fines as well as jail or prison time.

It has come up with a few recommendations:

≤ People who see graffiti vandalism should call 911 while trying to monitor the suspect or suspects and obtain descriptions of them, their vehicles and license plates, and their exact locations without approaching them.

The Graffiti Coalition plans a future town hall meeting to continue its efforts. In the meantime, it will promote increased awareness, appropriate removal techniques, training of interested volunteers, prompt removal and more security cameras strategically placed in the city.

“One of the things that we hope to be able to share is: What can you do as an individual?” MBRC President Jill LaMere said.

So, the committee, she noted, needs direction from the city on proper graffiti removal before it “oversteps” its bounds.

“Like the directions say: Put a little bit of your chemical on it and see if it’s going to destroy something before you do the whole thing,” Florek said.

“Historic buildings need really sensitive treatment,” Kelly said. “Not only is it something that needs to be cleaned, but a lot of them have historic status, and we want to be especially careful. A lot of them are stone or they’re brick, and you just can’t go at it with a quick treatment.

“It needs to be sensitive and correct.”