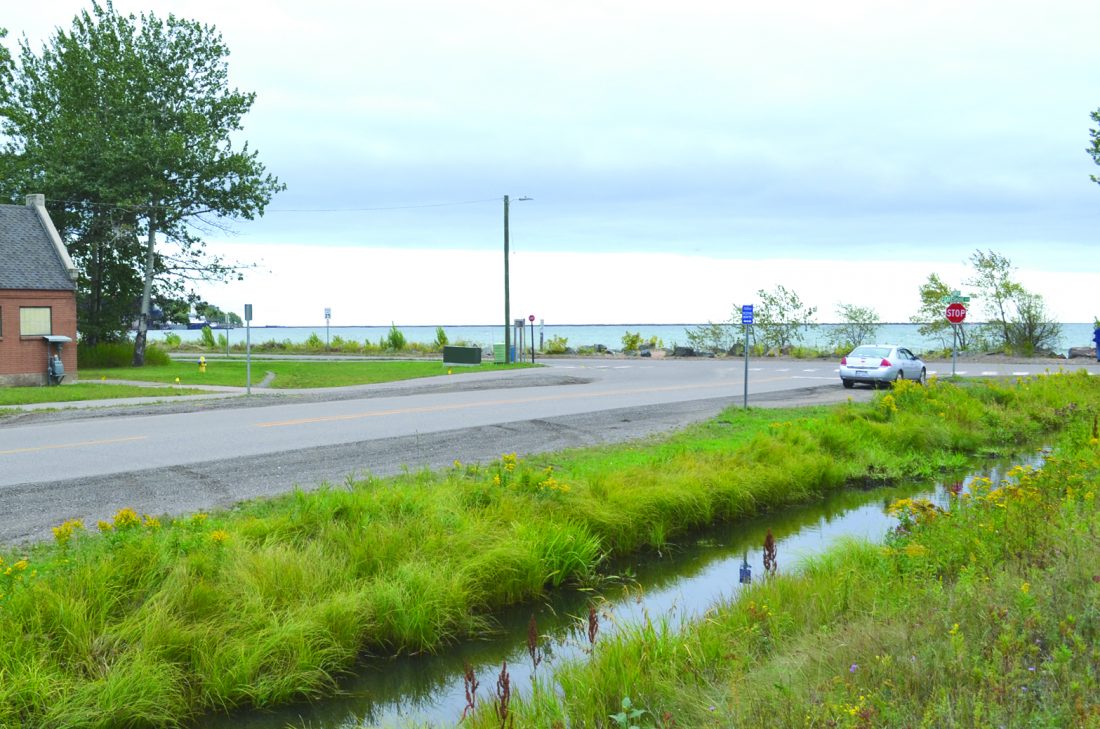 The intersection of Hawley Street and Lakeshore Boulevard in Marquette is pictured. The Marquette City Commission at its Monday meeting unanimously approved a contract for work on the Hawley Street storm drain reroute and restoration of nearby wetlands. The commission approved a contract with low-bidder Bacco Construction of Iron Mountain for just under $581,000, around $131,000 over the project budget of $450,000. The project is slated to start this fall and finish by the end of the year. (Journal photo by Cecilia Brown)

MARQUETTE — The Marquette City Commission at its Monday meeting unanimously approved a contract for work on the Hawley Street storm drain reroute and restoration of nearby wetlands. The project is slated to start this fall and finish by the end of the year.

“It’s late in the season. It’s a crunch project due at the end of the year. The prices weren’t as low as if you were bidding in the wintertime for a springtime project,” said George Meister of GEI Consultants, which designed a portion of the project and submitted a request for bids on behalf of the city.

The remaining roughly $131,000 will come from the Water, Sewer and Stormwater Utility funds, city officials said.

While commissioners expressed concerns about the project being overbudget and needing to use these funds, Marquette’s Director of Municipal Utilities Curt Goodman said the city is “hoping to save some money during the construction period.”

The budget of $450,000 stems from U.S. Environmental Protection Agency funding through the Great Lakes Restoration Initiative. The funding was awarded to the city in conjunction with the Superior Watershed Partnership.

The project, which consists of wetland restoration in conjunction with a reroute of the Hawley Street drain into the restored wetlands as opposed to Lake Superior, aims to “reduce impacts to Lake Superior water quality and public beaches by redirecting between 7.5 million and 9.1 million gallons per year of stormwater into newly created and restored wetland habitat,” according to the project description.

It stems from a beach monitoring effort by the city and the SWP that collected data on water quality and identified sources of E. coli bacteria that were coming from storm drain outlets near city beaches.

The urban stormwater portion of the project, designed by Coleman Engineering, will direct water flow from the Hawley Street drain north under Hawley Street to a new drain into the proposed wetland system for the project.

Work will involve traffic management, open cut evacuation, management of existing utilities, installation of new culverts and ancillary work, according to the city.

The new drain will “be excavated into the existing uplands and subsoils,” while the new wetlands will “include a mixture of functional wetland types,” the project description states.

The wetland portion of the project involves roughly 15 acres near Clark Lambros Park that stretch back along the Dead River toward Schneider Mill Court. This land was privately owned until being purchased by the city of Marquette that in an agreement including conservation easements, according to the SWP.

In August, the city acquired a 0.2 acre-parcel for the Hawley Street drain project from the Islander Beach and Tennis Club LLC for, which has also provided $85,000 for a grant match.

The land purchase, parcel acquisition and conservation easements secured by the city, as well as financial contributions by Michele Butler and the Clark Lambros family, have allowed this work to proceed, city and SWP officials said previously.

“With the investment Michele Butler did with Clark (Lambros Beach) Park, we felt it was importnat to do our part to look at the water quality,” Goodman said at the meeting. “And I think this is a good fix.”

When completed, the wetland area will filter stormwater, offer recreational opportunities for the public and connect to the lower Dead River while offering more wetland habitat for wildlife in the area, SWP officials said previously.

Commissioner Jenn Hill asked if the project would give the area capacity to handle storm events that come with extreme rainfall.

“We’ve maximized everything we can there,” Meister said. “The project will take that storm water that currently goes east off Hawley Street and divert it north up through this wetland channel to the Dead River. And we’re also opening up some larger wetland areas we can route it through and push it into to help give it a chance to clean (stormwater) and remove some of that contaminate.”

While some commissioners expressed concerns about the short timeline for the project — starting this month with a deadline of Dec. 31 due to the expiration of the grant at the end of the year — city officials said they had discussions with Bacco to ensure the contractor was comfortable with the timeline.

If the project is not completed, the contract includes a $900 per day fee for liquidated damages, city officials said.