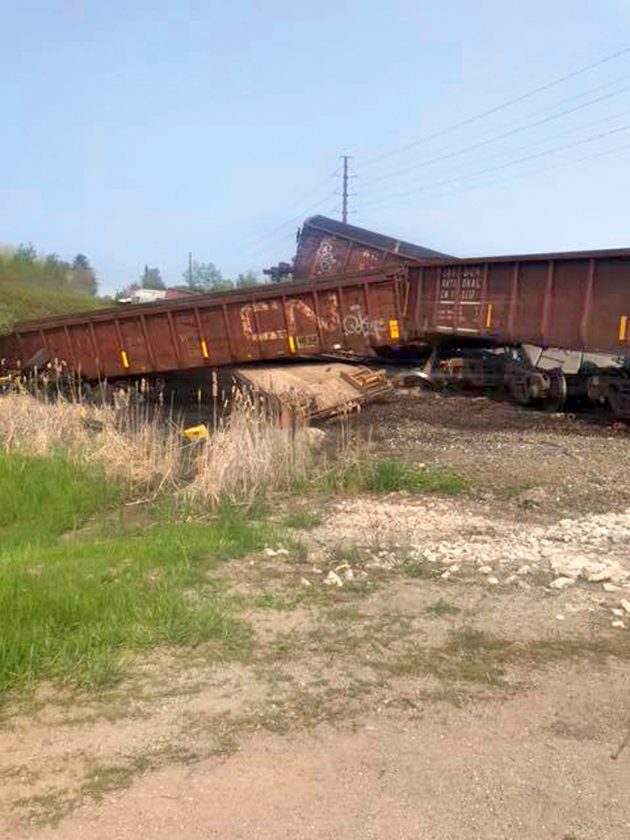 Derailed train cars are shown at the scene of a collision between a train and dump truck Thursday on Danforth Road. (Photo courtesy of the Delta County Sheriff’s Office)

The crash resulted in minor injuries for the dump truck driver, but officials say it may take several days to clear wreckage from the scene, according to a story from The Escanaba Daily Press.

Michigan State Police at the Gladstone Post were called to Danforth Road and the railroad crossing just west of 19th Avenue North at about 2:43 p.m. Thursday.

Troopers said a dump truck driven by Adam Lafave, 41, of Wilson, was eastbound on Danforth Road, pulling a flatbed trailer carrying an excavator. The dump truck was traveling downhill and apparently couldn’t stop. A Canadian National train was northbound, crossing Danforth Road. Emergency red crossing lights, gate, and audio tone were activated at the railroad crossing. The dump truck collided with the side of the moving train, causing some of the train cars to derail. Lafave avoided hitting other vehicles that were stopped at the train crossing before colliding with the train, police said.

Lafave was transported to the hospital by Life Flight and was released this morning after treatment for minor injuries.

Troopers said a portion of Danforth Road from North 30th Street to the top of the hill will remain closed for two to three days so railroad crews can remove the derailed cars. There is still access to North 30th Street.

Danforth Road is a heavily traveled route and motorists reported traffic delays during the morning commute today due to the road closure.

The crash remains under investigation.