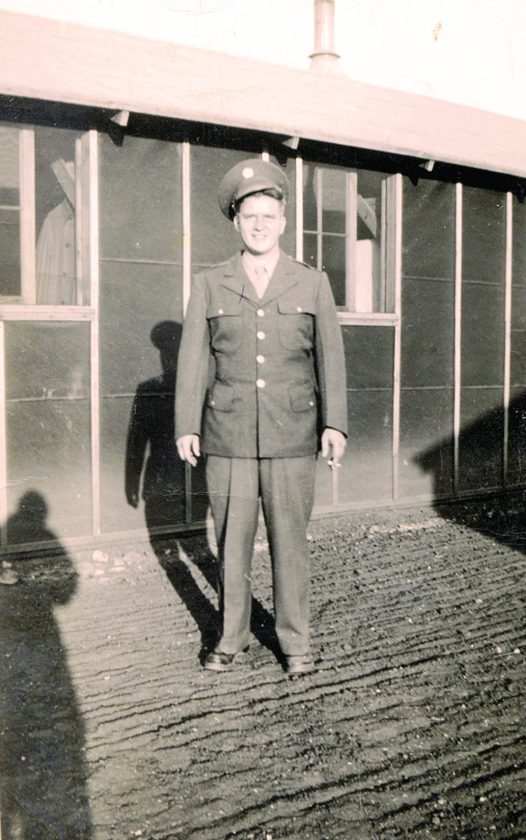 Driving down the narrow road just outside of Ringenberg, Germany, my son and I know we are close to the spot. We stop the car, check our GPS coordinates, and consult the map. It’s hard to say, but the dirt lane to our left might take us there.

An older woman walking her dog approaches our car and asks if we need help. My German is pretty dreadful, but I point to the spot on our map and say, “Bitte, wir mochten hier gehen.” Please, we want to go here.

She smiles and says, “Ja,” but I can tell she is puzzled by a request for directions to a spot that looks to be in the middle of a field. So I pull out the copy of a photograph from 1942, showing a young American airman in uniform.

“Diese Mann hat hier gestorben.” I’ve expressed it poorly, but she understands that I’m trying to tell her that this man died at that spot. She looks down at the picture of Reino Hyry, nods, and says softly, “Ah, so.” She studies the map carefully, and points to another road. “Nicht heir. Isselstrasse.” This is not the way, she says. To get to the place where Reino Hyry died, we must go back into town, and drive to the end of Issel Street.

Reino Hyry was born in Champion, Michigan on July 19, 1914. His childhood was perhaps emblematic for a boy who came of age during the Depression. He was one of 10 children born to Charles and Saimi Beck Hyry. Charles, a worker for the Marquette Country Road Commission, was killed in an accident when Reino was just 9 years old. Nine years after that, when Reino was 18, his mother died. The older Hyry children were left to support and raise their younger siblings. By the spring of 1940, Reino was living in Beacon, working as an engineer’s assistant in an iron ore mine, and making about $950 per year.

A War in Distant Lands

In June of 1942, just six months after the Japanese attack on Pearl Harbor, Reino enlisted in the U.S. Army. He entered the Army Air Forces, completed training as an aircraft radio operator, and was assigned to the 47th Troop Carrier Squadron of the 313th Troop Carrier Group. By the summer of 1943, he was overseas, based with the 313th at a desert airfield in Kairouan, Tunisia.

The primary mission of the troop carrier squadrons was to carry paratroopers into battle, and then re-supply them by air drops once they were on the ground in combat. And while the work of the troop carrier squadrons was not as dashing or romantic as their fighter or bomber counterparts, it was important work for the war effort, and could be just as dangerous. Troop carrier aircrews often had to fly their missions “low and slow” over combat zones, and their transport planes were easy targets for German anti-aircraft gunners.

Reino’s unit participated in the invasions of Sicily and Italy before being transferred to England in the spring of 1944. On June 6, 1944, aircraft from the 313th dropped paratroopers into Normandy. In September of that same year, the unit participated in the invasion of the Netherlands, and in December flew re-supply missions to embattled American troops during the Battle of the Bulge.

In early 1945, the 313th Troop Carrier Group was relocated to a forward airfield near Achiet-le-Petit in France. Although the end of the war was in sight, Nazi Germany was not yet defeated, and preparations were being made for Operation Varsity, the last big push across the Rhine River into the heart of Germany. It would be the largest airborne assault in history, and the 313th would have a key role in the operation.

Reino was assigned as radio operator on a brand-new C-46 transport aircraft which had been named Ada Red, after the pilot’s hometown of Ada, Oklahoma. The Ada Red’s mission was to carry 29 paratroopers of the 17th Airborne Division to their drop zone north of Wesel, Germany.

On the morning of March 24, 1945, 72 transports of the 313th lumbered down the runway, took flight and headed toward Germany. In pre-operation intelligence briefings, the men had been told to expect only “moderate” anti-aircraft fire over German territory, so there was a sense of cautious optimism as they approached the Rhine River.

That intelligence, though, was faulty, and as the planes of the 313th crossed the Rhine, they flew into a firestorm of flak. The woods and fields around the drop zone were bristling with over 350 anti-aircraft guns, and the slow C-46s were easy targets for German gunners. As one pilot would later report, “the Germans really began to give us the works,” and described how the planes of the 313th were “burning and exploding all around us.” Nineteen of the 313th’s planes, over a quarter of their strength, were shot down in a matter of minutes.

The Ada Red was hit almost immediately, and its right engine began to burn. Once the paratroopers had exited the aircraft, the pilot, Lt. Philip Sarrett, gave the order for the crew to bail out. Reino Hyry jumped first. He was quickly followed by the aircraft’s crew chief, co-pilot, and navigator, all of whom survived and made it back to their airfield. Sarrett attempted to escape the burning plane, but was killed when the Ada Red crashed into an apple orchard. Only Reino Hyry was unaccounted for — he had vanished.

It took almost three weeks before the Hyry family was notified by the War Department that Reino was missing in action. In the days that followed, the family held out hope that he might still be alive. On May 12, his oldest sister, Irene, wrote to another sister, Tyne, “It’s entirely possible that he parachuted to safety … and is a prisoner.” But as the weeks dragged on, the family began to fear the worst.

On May 31, in another letter to Tyne, Irene admitted that the lack of news about their brother had left her feeling “so depressed.” She continued, “I can’t imagine what could have happened to Reino. I’ve practically lost hope of ever hearing anything about him.” A few days later, though, another War Department telegram arrived, confirming that Reino Hyry was dead.

The War Department and U.S. Army Air Forces could provide few details surrounding the circumstances of his death. In the months that followed, all the family really learned was that Reino had been buried in an isolated grave at the place where he had been killed. Later, Reino’s body had been recovered and laid to rest in Plot D, Row 5, Grave 12 at the Netherlands American Cemetery in Margraten.

In 2012, though, some answers finally came from the family of another crew member, Capt. Richard Ketchum. Ketchum, the Ada Red’s navigator, was the last man to exit the burning C-46. He died in 2000, but one of his daughters said that her father had always told the family that the pilot and radio operator had been killed. The pilot, he said, had gone down with the aircraft. As for the radio operator, Ketchum said that Reino Hyry’s parachute had become entangled in a tree. As he dangled above the ground and struggled to free himself, German troops had shot him.

A Field by the Issel River

My son and I find Isselstrasse, a narrow street that winds through a normal-looking neighborhood. The street dead-ends at the edge of Ringenberg, but continues as a footpath that traces the east bank of the Issel River. We park the car and follow the footpath, walking along the Issel, a dark, slow-flowing river. After a short distance, we have to leave the footpath and hike along a railway line for several hundred yards. We go under an autobahn overpass, and there, to our left, is a nondescript field bordered by a wooded area. And while we can’t know the exact spot where Reino Hyry died, the record shows that it was in this area.

Although we can hear the noise of traffic from the nearby autobahn, the spot is peaceful and pleasant. It is still winter, but there are buds on the trees and other signs that spring is approaching. It’s hard to reconcile this quiet field with the sad knowledge that a young man died a violent death here, a young American who was alone and very far from the home he desperately wanted to see again.

My son and I walk about the area for a while, but eventually it is time to turn back. We retrace our steps along the railroad track, and then cut back to the footpath that runs along the Issel, that tranquil, dark river.

EDITOR’S NOTE: William Garvin is the archivist at Drury University in Springfield, Missouri. For the past seven years, he has been conducting research on the men of the 47th Troop Carrier Squadron in World War II, and visited the Operation Varsity battlefield in March. He wishes to thank members of the Hyry family who have helped him in this research.