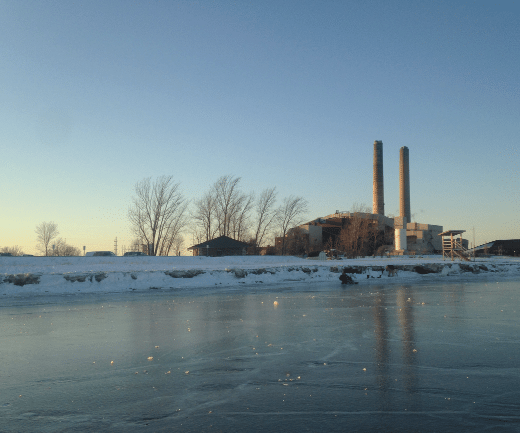 MARQUETTE — With spring approaching, Lake Superior is on the minds of many who live on her shores. Some may be curious about how high her waters will be and how her shores may look once the ice retreats as they dream of summer, while others may be hoping Superior’s ice cover holds on a little longer.

As of Saturday, ice coverage on Lake Superior was 50 percent — about 10 percent greater than the long-term average for March 10, with an average ice thickness of 5.5 inches. The ice coverage is predicted to gradually diminish over the coming days, expected to reach 45 percent on Wednesday.

However, over the past month, residents have probably noticed some major, less gradual fluctuations in Lake Superior’s ice coverage.

February began with only 15 percent of the lake’s surface covered by ice, with the coverage soaring to 77 percent in the middle of the month, roughly double the long-term average for that period in February, according to information from the Great Lakes Environmental Research Laboratory.

The frigid days of early February were an obvious factor in the major ice expansion during that period.

Since mid-February, there have been some major changes in Lake Superior’s ice coverage — it’s fluctuated between 50 and 75 percent, sometimes changing nearly 10 percent within a single day.

Not surprisingly, there are factors beyond just temperature that allow these rapid changes in coverage.

Wind, waves, current direction and speed can all have impacts on ice coverage — high winds, waves or fast currents can cause ice to break up and move quickly, leading to dramatic changes in ice coverage over the course of 24 hours.

“There are times when you can look at the Great Lakes and see a lot of ice cover one day, then wind and wave action can lead to very different conditions the next day,” Gronewold said.

In addition to these factors, the distance of a particular spot from the shoreline, as well as the depth of the water can impact ice formation.

“It’s not just the overall average depth in the lake, (it’s) also the changes in depth along different parts of the lake…. There are areas of the lake where it’s shallow, near the shoreline, where ice can form first,” Gronewold said, noting that temperatures, currents, winds and water depths are all interrelated factors in ice coverage.

According to a long-term forecast published on March 5 by the United States Army Corps of Engineers – Detroit, the water levels on Lake Superior are likely to remain above average as spring and summer approach.

Gronewold credits increased precipitation in the region for much of the increase in water levels, but the water levels in Lake Superior, like ice coverage, have seasonal and long-term patterns that are affected by a number of factors.

Gronewold said there are three major components that contribute to a lake’s water levels.

The biggest factor is precipitation that falls directly on the lake’s surface. This is particularly important on Lake Superior, due to its large surface area — 31,820 square miles.

The second major factor is precipitation that falls on land, entering the lake through streams and tributaries.

A third factor that affects water levels is evaporation off its surface, as the lake can lose water through the process, especially in the fall.

When the balance of these processes is shifted toward increased precipitation, water levels can rise.

“Those three major factors work together in concert to give water levels,” Gronewold said. “When we see surges — the most obvious (causes are) increases in precipitation, relative to average, and decreases in evaporation,” Gronewold said.

With increasing water levels, more dramatic waves can occur — on Oct. 24, 2017, a wave of 28.8 feet was recorded just north of Marquette at the Granite Island buoy. The wave, which occurred during the bomb cyclogenesis event last fall, was the highest wave ever recorded on Lake Superior. Lake Superior’s average water level for October 2017 was 603.05 feet, well above the long-term average of 602.07 feet.

The lake’s water levels typically decline during the fall, due to evaporation that is driven by differences in heat, energy, temperature and moisture between the air and the water.

“Most of the evaporation in the lakes occurs in the fall, in the late fall … that is when the lakes have a lot of energy, they are warm, the air is cold and dry,” Gronewold said, explaining that this contributes to the seasonal pattern of lower water levels in the fall.

As spring approaches, the lakes start to warm, as they absorb energy from the sun — this reduces the difference in heat between the air and the water, which, in turn, can lead to reduced evaporation and higher water levels.

“If you look at the seasonal cycle of water levels, it typically involves water levels rising in the spring…. There’s very little evaporation, but a lot of snowmelt and run-off coming to the lakes. (Water levels) usually peak in summer time, and then, evaporation picks up … the water levels go down in the fall,” Gronewold said.

While the lake levels did drop after October, they still remained about a foot above long-term monthly averages. This has been a pattern over the past years. Between January 2015 and December 2017, the average depth was 602.35 feet — again, about a foot above the long-term annual average of 601.71 feet.

“Five to 10 years ago, the conversation on the Great Lakes was about water loss and low water levels … in 2012 and 2013 Lake Michigan and Huron hit record lows,” he said. “A decade before that, in the late 1990s, water levels were high and began to drop … there’s been a lot of variability in water levels, (so it’s) important to take a look at the historical record.”

If history tells us anything, it’s that we have much to look forward to in the coming months — observing the spectacular process of Lake Superior’s ice gradually thawing is often a thing of drama and beauty.

For an overview of current, historical and forecasted ice coverage on the Great Lakes, visit www.glerl.noaa.gov/data/ice/#overview.