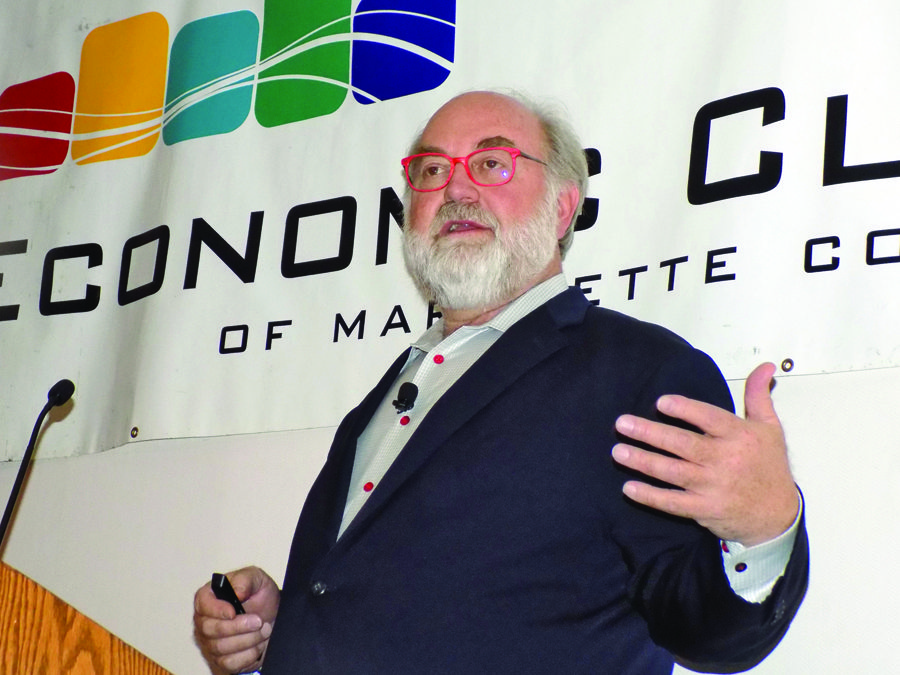 Thomas Frey, futurist and founder of the DaVinci Institute in Colorado, talks about possible future technologies Monday before the Economic Club of Marquette County at the Ramada Inn. Future changes, he predicts, involve virtual reality, artificial intelligence and other technologies. (Journal photo by Christie Bleck)

MARQUETTE — The future is ours to write, says Thomas Frey, futurist with the DaVinci Institute.

And that future likely will include sophisticated drones and driverless technology, among other innovations.

Frey was the speaker at the monthly program of the Economic Club of Marquette County held Monday at the Ramada Inn.

In1997, Frey founded the DaVinci Institute, based in Westminster, Colorado, a networking firm and think tank. According to its website at davinciinstitute.com, the institute is credited for conducting research that helped bring the United States Patent and Trademark Office to Denver and establishing DaVinci Coders, Colorado’s first micro college/coding bootcamp.

“People make decisions today based on their understanding of what the future holds,” said Frey, who before launching the DaVinci Institute spent 15 years as an engineer and designer at IBM.

So in a way, the future creates the present, he said.

“If we change somebody’s vision of the future, we change the way they make decisions today,” Frey said.

That was his plan for his Monday talk: to change the way audience members view the future so they walk away making different decisions.

He quoted Larry Page, co-founder of Google, who said in a Business Insider article: “The main thing that has caused companies to fail, in my view, is that they missed the future.”

Frey agrees with that concept.

“All industries end,” Frey said. “A thousand years from now, every industry we have today will have been replaced multiple times.”

In 2012, Frey predicted that by 2030, over 2 billion jobs will disappear. That prediction, he noted, was not intended to be a doomsday scenario but a wake-up call.

“We’re going to have to create jobs at a faster rate than ever before,” Frey said.

For instance, a computer app to replicate a carpenter level would eliminate certain jobs, such as making metal frames, that would be needed were a tangible level used, he said.

Yet a repair culture for all this technology exists.

“Just because all the jobs disappear doesn’t mean we’ve run out of work to do in the world,” Frey said.

Jobs in the future will come from certain industries, or what he called “the disruptive eight”: flying drones, driverless technologies, the trillion sensor movement, the internet of things, 3-D printing, contour crafting, virtual reality and artificial intelligence.

Frey talked at length about drones, which has tapped his imagination.

“What if I added robotic arms to a drone?” Frey asked. “What does that give me? What kind of things could I do with a drone with robotic arms? How about if I added lasers, or what if I put wheels on a drone? I could drive it on the ground as well as fly it in the sky?”

He also surmised drones could be used for fun pastimes like water skiing or more serious pursuits like using drones with sensors to identify small fires before they turn into bigger ones and drones that could extinguish fires. Ambulance drones could help in a medical crisis and “screamer drones” could be used to scare birds away from a sunflower field, thus saving numerous seeds from being eaten.

“Everyone drone in the future is going to have multiple capabilities,” Frey said.

He acknowledged legal, noise and privacy issues would have to be worked out, plus certain jobs like firefighters, security guards and videographers would disappear.

“At the same time, we’re going to be creating lots of new jobs,” said Frey, with those opportunities including drone command center operators and drone pilot trainers.

Frey’s vision of the future also includes driverless technology, with many global companies already involved in this innovation.

“We’re going to have to develop a level of trust with this technology, and that doesn’t come instantly,” Frey said.

One change he believes will happen with driverless technology concerns the electrical grid; since it appears driverless cars will be electric there will be more demand on the grid with the increased recharging of batteries.

He also expects the transportation landscape to change.

“We’re going to start seeing the first highways that are designated as driverless only, somewhere between 2030 and 2035,” Frey said, adding these highways will allow those drivers to operate their vehicles more closely together and much faster.

“It’s like the American Autobahn wherever you go,” Frey said.

He has another prediction for 2030, and that involves personal careers.

“The average person entering the workforce in 2030 better plan to reboot their career eight to 10 times,” Frey said.

Even learning is expected to evolve. One example Frey mentioned was a “sophisticated game of Pong” that learned how to master an optimal strategy that even the game designers hadn’t figured out.

So, he believes that by 2030, the largest company on the internet will be an education-based company nobody’s heard of yet.

“The future is ours to write,” Frey said.

The next Economic Club of Marquette County speaker will be Lewis Koski, marijuana consultant with Colorado Connections, who is scheduled to speak Nov. 20 at the Ramada Inn. Non-members may attend, with the cost of dinner $40.