GOP must decide what to do with health law taxes 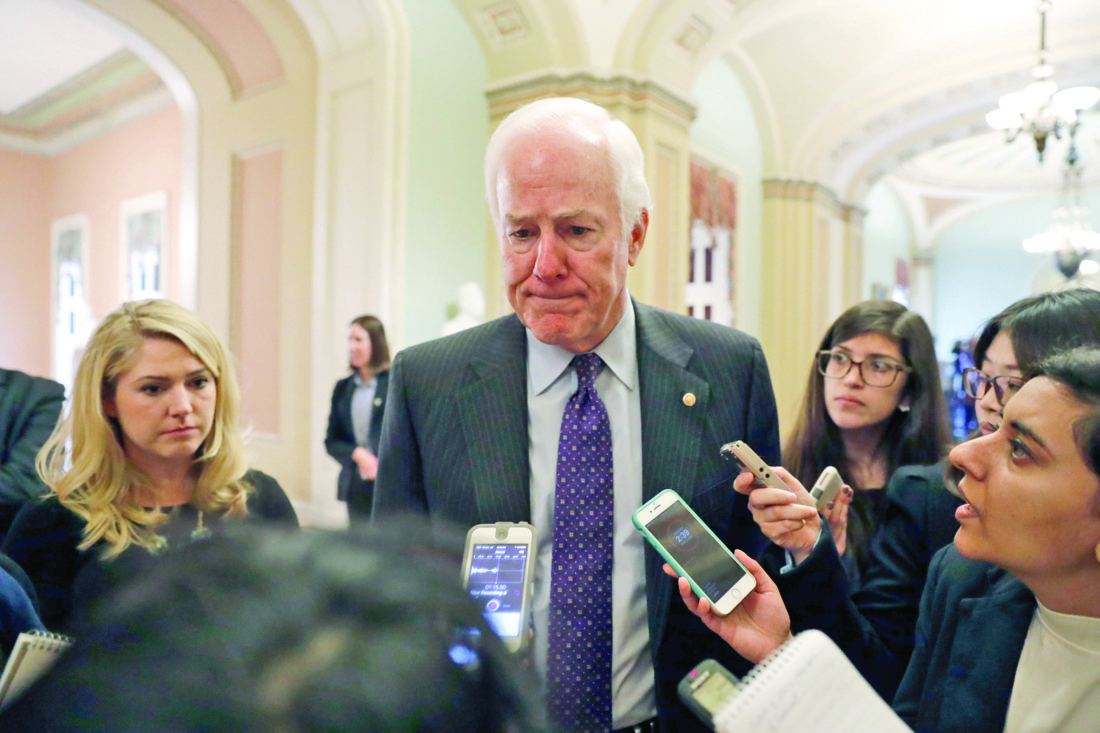 FILE - In this Jan. 3 photo, Senate Majority Whip John Cornyn of Texas talk to reporters on Capitol Hill in Washington. Republicans are focused on cutting taxes, especially if they were authored by a president named Barack Obama. (AP photo)

WASHINGTON– Republicans love cutting taxes, especially if they were authored by a president named Barack Obama. But as they push their wobbly effort to erase his health care overhaul, they’re divided over whether to repeal the levies the law imposed to finance its expanded coverage for millions of Americans.

It’s a trillion-dollar dilemma — actually closer to $1.1 trillion. That’s the 10-year price tag the nonpartisan Congressional Budget Office puts on revenue the government would lose if the law’s taxes on wealthy people, the insurance and pharmaceutical industries and others were eliminated.

Republicans and President Donald Trump have been edging away from their promise to quickly eliminate Obama’s entire law. Still, annulling its taxes would be a partial victory and is irresistible for many GOP lawmakers and the conservative voters at the core of their support.

“We should do full repeal,” said Rep. Jim Jordan, R-Ohio, a leading House conservative. “And full repeal means not taking the taxes” from people.

Yet voiding those levies erases a mammoth war chest Republicans would love to have — and may well need — as they try replacing Obama’s law. It’s a major rift GOP leaders face as they try crafting a health care package that can pass Congress.

“These are sources of revenue you just can’t discount,” said Rep. Patrick Meehan, R-Pa., a member of the Tuesday Group of GOP pragmatists. He said the money could help “create a soft landing and coverage for those who currently rely on Obamacare.”

Republicans know they’ll need tons of cash, whatever they devise. The figure is currently unknown.

“Whatever we do in replacement is going to cost some money, and is there a way to generate money if we ditch all the Obamacare tax revenues or not? That’s where we haven’t achieved consensus,” said No. 2 Senate GOP leader John Cornyn of Texas, who supports erasing the levies.

Killing the taxes leads Republicans to other tough decisions.

If the taxes are repealed and Republicans need money for their replacement plan, do they pay for it with higher federal deficits? Do they deeply cut Medicaid, which provides health care for low-income people, or carve savings from Medicare, which serves the elderly? Might they raise other taxes, something that’s been anathema to the GOP for decades?

“There’s going to be a temptation for policymakers to take the easy way out” and simply let deficits rise, said Maya MacGuineas, president of the bipartisan Committee for a Responsible Federal Budget. She said for Republicans promising for decades to improve the nation’s fiscal health, that choice “is going to look hypocritical.”

The GOP has different options for preserving revenues, like phasing in repeals of taxes or eliminating some while retaining others. Participants say Obama’s taxes on medical device makers and on insurance and pharmaceutical companies seem among the likeliest to go.

Still, with solid Democratic opposition a certainty, GOP leaders such as House Speaker Paul Ryan, R-Wis., face pressure to find a tax sweet spot without enraging part of their party or threatening the entire effort.

Last summer, Ryan offered a campaign proposal with scant detail to replace Obama’s law with tax credits, expanded health savings accounts and other steps. It would repeal all of the statute’s tax increases.

It also proposed new taxes on the part of employer-provided health insurance that exceeds an unspecified level. The blueprint says it would affect “only the most generous plans.”

Such coverage is currently not taxed, and supporters say the idea would prod companies and workers away from overly costly insurance. Its fate is uncertain.

Besides financing their replacement programs, Republicans will need additional billions to deliver on their pledge to not abruptly halt coverage for the 20 million people receiving it under Obama’s law. That means covering them during a transition period of perhaps two years or more until new GOP programs begin.

The health insurance industry has warned it will need billions in federal payments that companies currently receive to continue during that transition. The money subsidizes out-of-pocket costs like deductibles and copays for millions of lower-earning customers.

Last year, a federal judge agreed with House Republicans that Obama’s law didn’t authorize that spending. If the Trump administration and congressional Republicans declare victory and halt those payments, that could force companies to boost rates or abandon markets.

That’s an outcome Republicans want to avoid, so Congress may be asked to provide some of that money.

“We could be asked to take a very, very tough vote to stabilize the insurance market,” said Rep. Michael Burgess, R-Texas, who heads a House health subcommittee.

“They’re in a hell of a bind,” said Joseph Antos, health policy expert at the conservative American Enterprise Institute.