‘Welcome to your first day’ 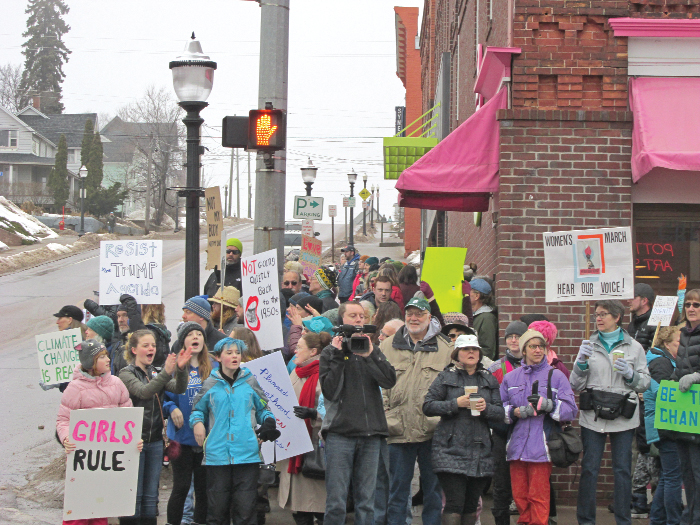 Hundreds rallied in Marquette Saturday as part of the Women’s March - Marquette, organized in solidarity with other marches that took place around the country and world. (Journal photo by Mary Wardell)

MARQUETTE — Hundreds of people rallied in downtown Marquette Saturday chanting, singing and carrying signs to peacefully protest the divisive incoming administration and to stand in solidarity with hundreds of Women’s Marches that took place around the country and around the world.

The atmosphere at the Women’s March – Marquette was electric, the culmination of multiple actions over the weekend as people with varying objections came together in united opposition to President Donald Trump.

Similarly, the grassroots organization of the march in D.C. constituted an intersectional collection of many movements and groups fighting for issues pertaining to racial, religious, reproductive, environmental, economic and labor justice.

Initial reports from the Associated Press estimated the turnout in D.C. to be about 500,000 — more than double initial projections. Turnout for marches in cities around the world are also reported to be surpassing estimates, with some newspapers predicting it will go down as the largest inauguration-related demonstration in U.S. history.

In Marquette, sidewalks at the intersection of Washington and Third streets were thronging with crowds that reached down Washington significantly in both directions.

Megan McCormick, a Northern Michigan University student from Madison, Wisconsin, said she had never been part of a protest before, but was excited by the experience.

“It feels really awesome,” McCormick said. “Especially the chants and the songs kind of bring everyone together, and it feels great.”

Her sign said “Ask me about my stats,” to which she readily obliged, saying that one in five women are the victims of assault or attempted assault while attending college. For men, it’s one in 16, and for people who are transgender, it’s one in four.

“The LGBTQ population are at the highest risk,” she said. “These stats are unique to college campuses because it is an epidemic on college and university campuses across the country.”

If Trump is guilty of what he bragged about in a recorded conversation in 2005 and what he has been accused of by multiple women, McCormick said — that is criminal sexual assault.

“As much as people want to say that it’s — what was it, ‘locker room talk?’ You don’t brag about sexual assault, that’s someone’s body,” McCormick said. “Under Michigan law, you cannot do that without asking someone’s consent, otherwise you would … be guilty of criminal sexual conduct, either the 2nd or 4th degree.”

Retired teacher Judy Sarosik said she was at the march for the sake of water, the environment and public education. She also remembers demonstrating against the Vietnam War and racial injustice at NMU.

She said she was very pleased by the turnout Saturday.

“It would be nice to see this happen again and not just be a one-time thing, because I think we need to let our voices be heard more and more and more,” Sarosik said.

If this level of unity and engagement is what comes of Trump’s election, then “so be it,” she said.

“There’s always something good that comes from something bad, at least that’s what I believe,” Sarosik said. “I’m not happy about him being in office — it’s kind of embarrassing actually — but I don’t think that things will be as dark as everybody was feeling at first, because I think we have a strong connection now, you know, with each other.”

Ezekiel Uballe, who retired to Marquette with his wife four years ago, constructed a large paper mache effigy of Trump to carry at the rally.

He said he used recycled Mining Journal newspapers and lots of his wife’s flour to make it.

“She was mad at me because I took all her bread flour,” Uballe said. “After she saw what I did, she said ‘Man, this is better than baking bread.'”

Uballe, a Latino born in Texas, said he was angered by Trump’s racism, sexism, greed and “absolute narcissism” and was motivated by fear for what Trump has unleashed in America and the kind of cabinet he is assembling.

“And I fear for my immigrant brothers and sisters who may be deported,” Uballe said. “I’m a citizen of the United States. … My mother was born in Texas 100 years ago, … but yet who’s to know how to distinguish me from an immigrant who just came from Latin America or Mexico?”

Trump’s America and that of his supporters is colored by that kind of racist lens, Uballe said.