Brazilians say ‘I do’ at drive-thru weddings to avoid virus 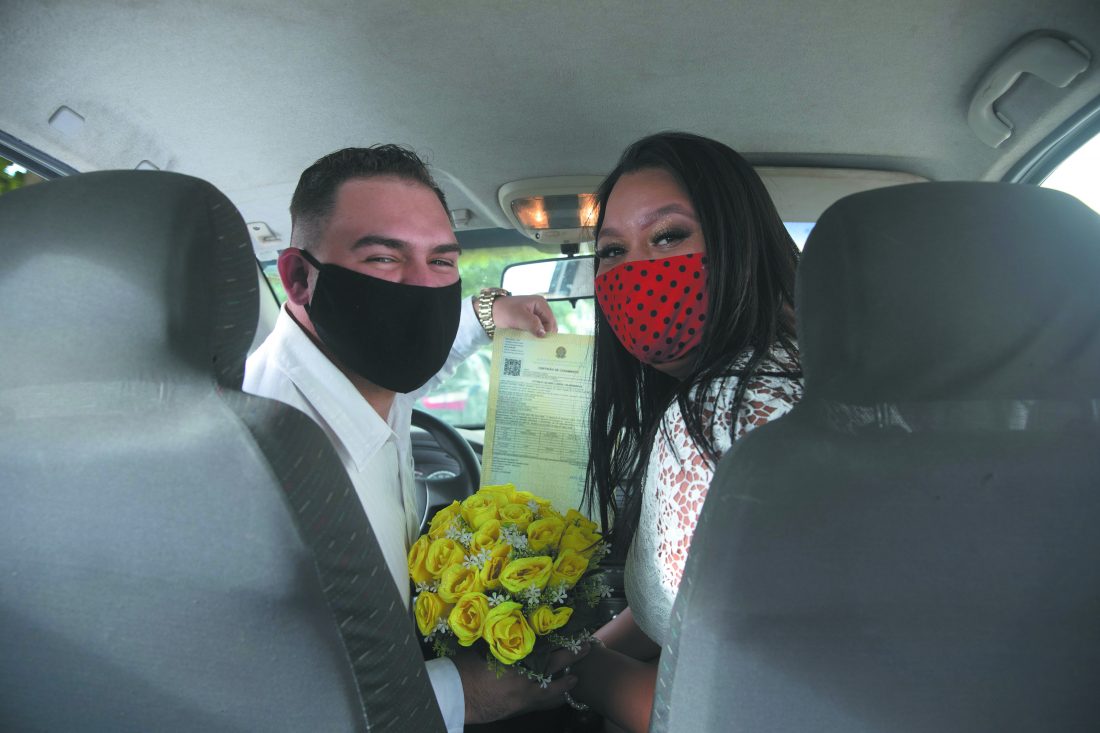 Ayrton, left, and Natasha, wearing masks to prevent the spread of the new coronavirus, pose for a photo after their drive-thru wedding at the registry office in the neighborhood of Santa Cruz in Rio de Janeiro, Brazil on May 28. Couples unable to have a traditional wedding because of the coronavirus pandemic are now taking part in drive-thru weddings. (AP photo)

RIO DE JANEIRO — For Joao Blank and Erica Blank’s first kiss as husband and wife, they didn’t lock lips. The couple could only press their face masks together while sitting in the back of a hatchback, where they had just been wed.

A Brazilian notary public hovering outside the car presided over the May 28 ceremony.

The drive-thru marriage perhaps wasn’t the romantic vision the Blanks had imagined, but it is one of few possibilities in the era of the new coronavirus.

People have begun turning to this unconventional union at a notary in Santa Cruz, a neighborhood on the western outskirts of Rio de Janeiro, since the COVID-19 disease caused by the virus started battering Brazil. On May 28 alone, 15 couples were married at its drive-thru.

“We’re very happy because we didn’t think we wedding date would come so soon,” said Erica Blank, 24, who works in a pet shop. “We found out a week ago that we would get married and it was so good!”

Rio de Janeiro state is Brazil’s second hardest-hit state by the pandemic, with nearly 45,000 people infected, according to the official tally. Experts say that is a significant undercount due to lack of testing. There have been almost 5,000 deaths.

Because most states have prohibited large gatherings in their effort to curb the spread of the virus, many Brazilians have been forced to delay traditional wedding ceremonies or seek safe alternatives.

Rio and at least six other states have enacted regulations allowing matrimony via video conferences. In Sao Paulo, a notary public can visit couples in their homes so they can sign all requisite documents before such weddings.

But the notary in Santa Cruz is the only one that has created a drive-thru, according to Brazil’s national association of civil registrations.

The ceremony lasts about five minutes, with couples reading their vows, exchanging rings and sealing it with a kiss.

Couples are choosing the drive-thru ceremony for several reasons, said Alessandra Lapoente, the notary who officiated at the Blank wedding.

In most cases, a couple had set a date but their ceremony was torpedoed by the pandemic. They prefer to go through with the wedding instead of lingering in limbo, unsure of when a traditional ceremony might be possible.

Others want quick access to their partner’s health insurance plan — a hot commodity in the midst of a pandemic, Lapoente said.

“We saw the need to create a way to hold a safe celebration that was fast and within regulations,” Lapoente said. “We made the ceremony brief, but with all the requirements, and everyone leaves happy.”

Their ceremony completed, the Blanks happily drove away. Three more cars waited in a line, each with couples awaiting their turn to say “I do.”