Usually when I reach for a book that doesn’t have to do with parenting, I reach for fiction. Lately, however, I’ve read several nonfiction books in a row. Just for my own purposes. Most of them are newish titles. All of them are written by women; all of them, to a varying degree, reflect on women’s roles in society over time. It just so happens that women’s history month starts tomorrow.

“The Moment of Lift: How Empowering Women Changes the World” by Melinda Gates is mostly a book about the Gates Foundation, but it’s also Melinda Gate’s personal story as a smart, ambitious young woman starting her career, gaining success and then trying to make a difference in the world. What I found most interesting as I read this book was the process of trial and error as Gates gained a deeper understanding of her own strengths and limitations while developing the most effective foundation she could.

As a library person, I found Susan Orleander’s “The Library Book” a real pleasure to read. Orleander, best known for her book The Orchid Thief, is a master stylist. Part of the pleasure was just enjoying a good writer show off her skill. Like the Moment of Lift, the focus of the book shifts from the personal to the universal. As the library field was historically seen as women s work, I was intrigued by how gender politics played out in this book. Much of the book explores the history of the main library in Los Angeles, which was set ablaze in the 1980s.

“Journal of Solitude:”In this, her bestselling journal, poet, novelist and essayist, May Sarton (1912-1995) writes with keen observation and emotional courage of both inner and outer worlds: a garden, the seasons, daily life in New Hampshire, books, people, ideas and throughout everything, her spiritual and artistic journey. Written in the early 1970s, I found it noteworthy how relevant this work remains.

Like many Marquette readers, I discovered “Braiding Sweetgrass: Indigenous Wisdom, Scientific Knowledge, and the Teachings of Plants” in 2015 when Robin Wall Kimmerer spoke at Northern Michigan University. Published in 2013, this book weaves together strands of tradition, personal narrative, and science. Kimmerer, a botanist, a member of the Citizen Potawatomi Nation, and a working parent, is a keen observer and storyteller. This work has had a recent resurgence in popularity as after years of word-of-mouth publicity, it found its way onto the New York Times bestseller list.

In “Self-Compassion: The Proven Power of Being Kind to Yourself,” Kristin Neff makes distinctions among self-pity, which can be crippling; self-esteem, which can be a component to narcissism; and self-compassion, which can be an effective means of moving through suffering and anxiety and toward clear-headed self-advocacy. About this work, Gloria Steinman writes: “A portable friend to all readers — especially but not only women — who need to learn that the Golden Rule works only if it’s reversible: We must learn to treat ourselves as well as we wish to treat others.”

MARQUETTE — Meijer is closing early on Easter Sunday to give its team members the opportunity to spend time with ... 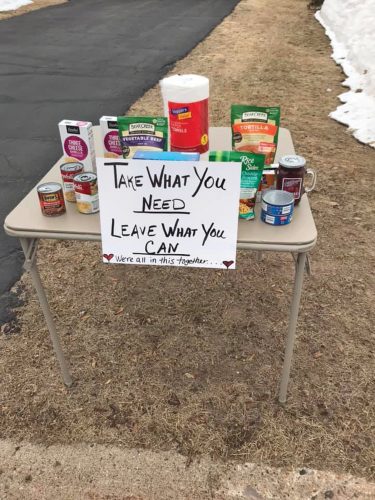 ‘Take what you need, leave what you can’ table set up to help neighbors

MARQUETTE — In response to an overwhelming need on the part of health-centered, non-profit organizations across ...

Cambensy on vote to extend state of emergency, disaster declarations

LANSING — On April 1, Gov. Gretchen Whitmer declared a state of disaster and expanded the state of emergency ...

LANSING — Secretary of State Jocelyn Benson is seeking election workers to support elections amidst the ...