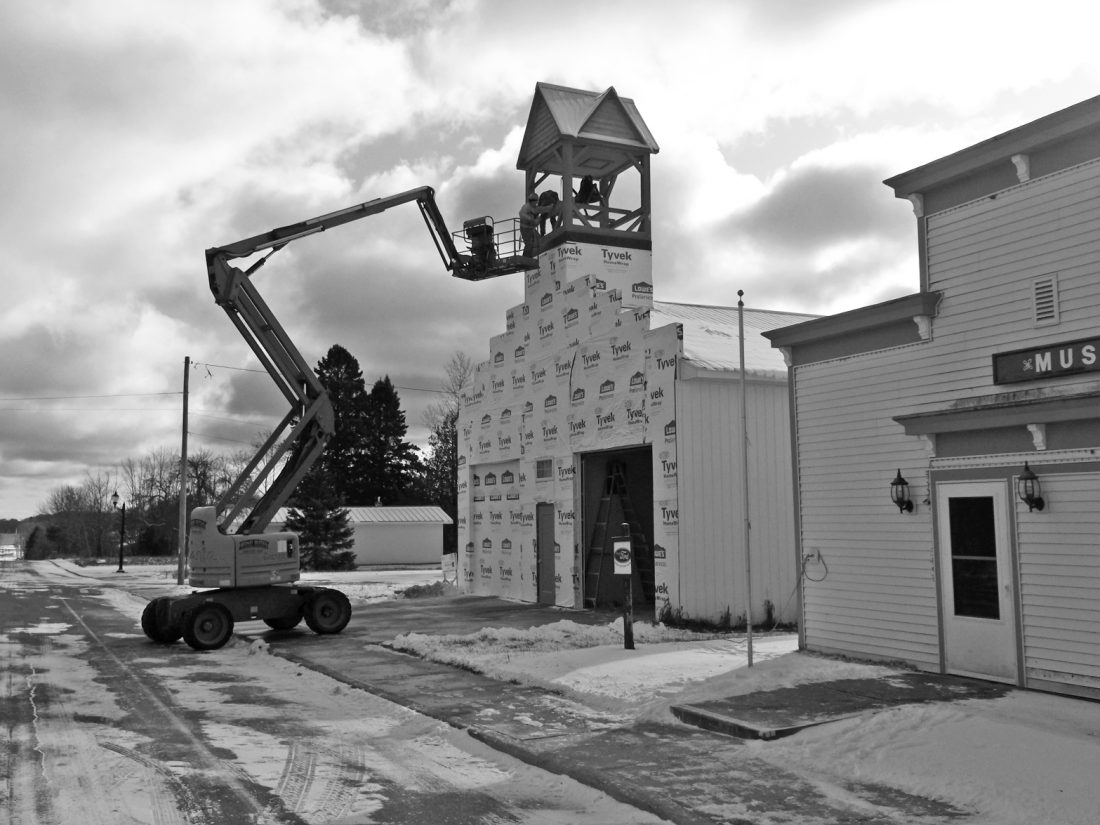 Volunteers work to place the bell tower on a structure next to the Michigamme Museum on Main Street that will house the township’s 1900 Metropolitan steam engine along with other historic vehicles and large artifacts. A group of township residents found and purchased the vehicle for $150,000 in 2007. (Photo courtesy of Don Moore)

MICHIGAMME — Michigamme Township proves over and over again that when it comes to preserving history, it’s the little town that could.

It started with the 20-year pursuit and finally the procurement of the township’s own 1900 steam fire engine, which had been sold to a private collector in 1962. The purchase of the steamer took a significant fund raising effort, in the end it cost $150,000 to buy the device back from a collector in Colorado in 2007.

With their beloved steamer returned and paid off, now came the question of where to put it. Determined residents exerted their will once again, this time on the Michigamme skyline. In excess of $150,000 was raised for a modern-day replica of the early 1900’s engine house to store the steamer and other large artifacts from the Michigamme Historical Museum, and on Tuesday, the township put a bell tower atop that structure.

“We built it to look like the engine house the steamer was stored in just after they bought it,” longtime Michigamme Museum volunteer Don Moore said.

Some of the money to build the structure was provided by the township, but a large portion of it was garnered via donations, soup and spaghetti dinners, bottle and can drives and the annual classic car show, Moore said.

The bell is an artifact in its own right. It reportedly survived a forest fire at the Michigamme Mine in the 1870’s before being put to use at the Michigamme High School building, which according to an account in a Michigamme Area Centennial magazine, burned to the ground in the summer of 1914 only to be rebuilt in 1915. The bell later found a home at a park at the end of Main Street and was then brought to the Michigamme Museum several years ago, Moore said.

Charlie Gardner, who has worked on the steamer and the engine house project since the late 1970’s, said the bell tower would not be possible without Michigamme-area resident Tim Eldridge.

“He donated all of his time and materials,” Gardner said. “Midway rentals came with a crane to place it, and John Odovero was the crane operator who put it in place.”

Moore said although the structure as it sits is paid off, there is more work to do.

“What’s been built is paid for, but we need money to finish the rest of the building,” he said.

“We always have to do a big splash, and I don’t know how we pull it off but we just do. I don’t think there is another small town that has what we have, and it definitely says something about the community.”

For more information on the steamer or building construction or to learn how to donate call 906-323-6311 or visit the website at www.michigammesteamfireengine.org