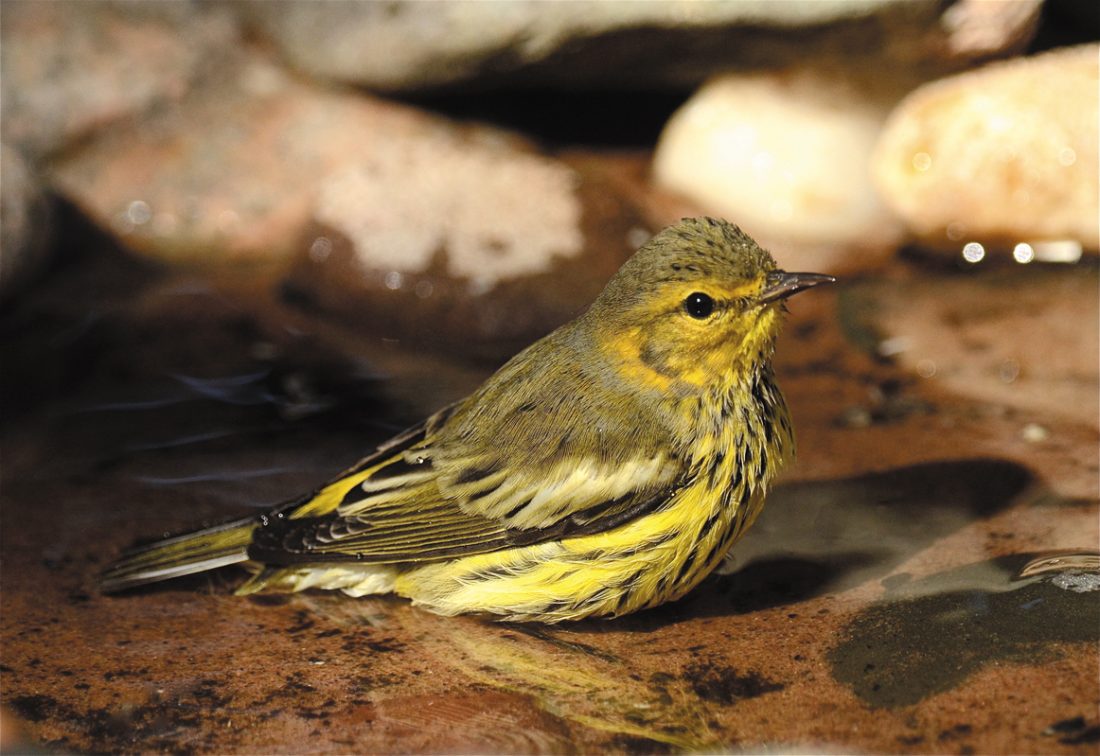 A Cape May warbler looks on. (Scot Stewart photo)

“The crickets felt it was their duty to warn everybody that summertime cannot last for ever. Even on the most beautiful days in the whole year – the days when summer is changing into autumn – the crickets spread the rumor of sadness and change.”

Shorebird migration continues to move at a slow pace in the Upper Peninsula signaling the inevitable changes moving August to summer’s end. In Marquette four new semipalmated sandpipers and a least sandpiper were seen on the Lower Harbor breakwall August 10th following a sighting of a single semipalmated there a few days earlier. During the rain on August 13 though two-dozen semipalmated sandpipers and a least were seen in the Lower Harbor, followed by only eight with better conditions the next day. At the sewage lagoons in Chatham, in Alger County, a stilt sandpiper, a much rarer shorebird, was seen on Monday with a greater yellowlegs and a solitary sandpiper.

A Seney National Wildlife Refuge, a black-backed woodpecker was seen on Monday. Black-backed woodpeckers have been difficult to find in the U.P. the past two years. They are drawn to areas where forest fires have recently occurred. A variety of beetles are attracted to timber recently injured or killed by fires. These beetles lay their eggs beneath the bark of these trees. Unable to produce chemicals in the cambium tissue to deter insect attacks, the beetle larvae feed on this nutritious layer. The insects in turn attract the woodpeckers, known for their feeding technique of flaking the bark away to expose the beetles.

Seney National Wildlife Refuge regularly manages portions of the forest and wetlands with prescribed burns. In 2015 black-backed woodpeckers were seen regularly the area along the Driggs Road on the west side of the refuge. There were seen less regularly there the following year, but with periodic prescribed burns on the refuge, there are plenty of areas where the birds can thrive out of the main flow of visitors. The past two years they have been more difficult to fine so the discovery of one will definitely attract the attention of birders.

Over the past 20 years, another birding scene changing drastically has been the aerial displays of swallows and swifts in the U.P. At one time the air was active with tree, barn and cliff swallows and chimney swifts all day as they collected flies, midges, mosquitoes and flying ants. Except for a few pairs of cliff and barn swallows nesting around the Lower Harbor ore dock and some on barns just outside of town, Marquette’s have all but disappeared, with no signs of active nests under bridges or the eves of larger buildings in town. Tree swallows were active nesters in boxes around Presque Isle but have not shown anything close to their former presence in the skies in town.

Chimney swifts once had a prodigious presence in town, culminating in a roosting flock just before fall migration of nearly 400 overnighting in chimneys of unused building on Rock and later Front Street. A flock of only four was seen over Third Street last week and another sighting came farther over on the east side of town. While there are no definitive answers to explain their decline, changes in wintering habitat, including the continued use of harmful pesticides in Central and South America and declines in insect populations here due to farming and lawn care products have definitely played parts in the alarming drops in their numbers and of many other insect eating birds.

With continuing dry conditions water will continue to be an excellent lure to attract birds to yards. There has been an uptick in Cape May warblers in the Marquette area, along with smaller numbers of American redstarts, yellow-rumped, black and white and Nashville warblers. Bird baths, and even better water drips (structures that will create the sound of water) are great for attracting them and other birds looking for water to drink and for bathing.

Hummingbird sightings continue to be good across the area. In Wisconsin some birders have reported lower numbers at feeding stations but here even male birds continue to be seen at feeders and in local flower beds. Adult males continue to sport bright red chin patches called gorgets, while both females and juveniles have white to grayish throats.

While the days are definitely quieter, there are still some northern cardinals, song sparrows and a few red-eyed vireos singing in Marquette. A drive down Lakeshore Boulevard in the early morning will turn up a few songsters, and other birds like blue jays and black-capped chickadees calling to young.

Early morning birding is still the best for catching not only quiet conditions for hearing and seeing birds just getting going for the day but other interesting sightings too. At Presque Isle there apparently was an extremely good emergence of gray tree frogs this summer. As a result the plant life along the edge of one of the ponds was literally full of young frogs Wednesday. Gray tree frogs are able to change the color of their skin as they sit on a branch or leaf and can, over several hours, change to all green as these did, brown or mottled gray just like chameleons. So, there is still plenty to see with birds and frogs, and hear with the cicadas and crickets as August rolls on.

MARQUETTE — The Kiwanis Club of Marquette is now accepting grant applications for the 2020 fiscal year. Note: ...

NEGAUNEE — An informational/registration meeting for Negaunee Public Schools parents of junior kindergarten and ...