DEAR ABBY: My husband said something very derogatory to my cousin’s sister-in-law at a family party. She told my cousin right away. Instead of coming to me, my cousin went to my brothers and sisters-in-law. They confronted my husband and told him he had to tell me or they would. My husband did tell me. Of course, it is now out in the open, and the ramifications have been horrible. My husband has apologized to all parties, which is about all he can do.

The issue is, my brothers and sisters-in-law now hate him to the point that they don’t want him around their kids, whom my husband adores. I love my husband, but I love my family too. I worship my nieces and nephews.

I know if I stay and work on my marriage, my brothers and their wives won’t support my decision, which will make me unhappy. We will no longer be able to socialize with family as a couple. However, if I walk away from my husband without trying to work on my marriage, I won’t be happy either. I’m confused and trying to decide if I stay or go. Please help! — LOSING EITHER WAY IN NEW YORK

DEAR LOSING: Was what happened at the family party something that happens often? Is your husband a loose cannon, a drunk, a misogynist, a verbal abuser? Has he changed for the worse since you married him? If the answer to these questions is no, in light of the fact that he has apologized to all concerned, I don’t think you should give up on your marriage without careful consideration, possibly with input from your spiritual adviser and/or a licensed marriage and family therapist.

DEAR ABBY: I have an invisible injury — a traumatic brain injury that occurred when I was struck by a car when I was 10. People don’t understand my symptoms. When I stumble when I walk, people have accused me of being drunk. When I haven’t been able to answer a question right away, I’ve been called an idiot. Kids have made fun of me in front of my daughter while their parents looked on and smiled in approval. It taught my daughter to be a more understanding and compassionate person.

My injury has made it hard for me to make friends. My memory is shot. I forget names but remember faces. I have tried explaining to people what happened only to be accused of lying. It hurts. I have quit trying to make friends because it’s just easier to be on my own.

I guess I’m writing to you hoping to remind people that just because you think you know what’s going on with someone does not mean that you do. — MISUNDERSTOOD

DEAR MISUNDERSTOOD: I’m printing your letter because it is an important one. Many people suffer from hidden disabilities. That you have been subjected to the kind of abuse you have received from these insensitive, rude individuals makes me wonder about the intelligence level of the people you are surrounded with. You might feel less isolated if you affiliate with a brain injury support group. You can find one by contacting the Brain Injury Association of America. The toll-free number to call is 800-444-6443 or visit biausa.org.

DEAR ABBY: I’m engaged to be married to a wonderful woman who has a 6-year-old daughter with her ex-husband. They share joint custody.

His controlling nature was a major factor in her decision to end their marriage. Even now, after being divorced more than two years, he tries to control her life. One way is by insisting on pictures of the three of them at every function where they are all present. First day of school, graduations, etc., he has to have pictures taken of him along with my fiancee and their daughter as if they are still one big, happy family.

He’s now engaged to someone as well. I can only assume his fiancee must find these “not a family” pictures as strange as my fiancee and I do. The reason we haven’t shut him down when he insists on these pictures is that we think maybe it is a nice thing for her daughter to have pictures of herself with her mom and dad. But we dread every event because we know he is going to expect this. Will it do the daughter any harm to stop him the next time he starts insisting on this increasingly awkward situation? — IN THE PICTURE, TOO

DEAR PICTURE: Because this practice made your fiancee uncomfortable, she should have put a stop to it when it began. She should not do anything that makes her uncomfortable. A way to deal with it now without roiling the waters would be to wait until you and your fiancee are married — and her ex and his fiancee are married — and make it a group photo of the entire blended family from then on.

DEAR ABBY: My husband and I will celebrate our 22nd wedding anniversary on the seventh of next month. My brother was divorced after five years of marriage and is now getting remarried by a justice of the peace. His “bride” is also divorced, and this will be a second marriage for both of them. They initially planned to be married on the third of the month but changed the date to the seventh saying they couldn’t find another date that worked.

Last time I checked, there were 31 days in the month. Our parents don’t understand why I’m upset that my brother plans to marry on my wedding anniversary date. I feel this is my special day, one that I have earned after 22 years of marriage. My brother and his fiancee could easily pick another date. Am I being petty, or is my brother unreasonable? — THAT’S MY DAY IN MICHIGAN

DEAR DAY: I’m glad you asked. You are making a mountain out of a molehill. You don’t “own” the seventh of next month.

Rather than looking to be offended, you should be hoping that your brother and his fiancee have the same good fortune and years of happiness that you and your husband have enjoyed. Their anniversary won’t impinge on yours.

The most meaningful wedding gift you could offer them would be to wish them every happiness on this special day — for all of you — and stop looking for drama where there isn’t any. Celebrate your anniversary next month at a time that works best for you and your husband.

DEAR ABBY: I own a small retail shop. One of my employees (I’ll call her Sara) has been with us for a number of years. Until recently she’s been a stellar employee. She has been through several traumas during the past year, including the death of her father, unexpected injuries and medical bills, and finding out that her husband had molested her teenage daughter and other girls as well. It has been enough to drive anyone over the edge of emotional stability, and she has been noticeably struggling.

Sara has seen a doctor and is seeing a therapist for this, but she’s still having a difficult time. These things don’t heal overnight. I understand that.

Brick-and-mortar retail pretty much runs on presenting a cheerful face, happily engaging with customers and answering their questions — something Sara has been emotionally unable to do. Customers have begun complaining to me about her moodiness and saying she has been ignoring them. I’ve talked to her about this a couple of times now, and each time she says she’ll do better, but she hasn’t.

Abby, she’s been through so much, I’m reluctant to add to her trauma by letting her go, but I feel I’m being backed into a corner here. Is there a solution I’m not seeing or something I can say that will help resolve this without having to let her go? There isn’t any work currently available that doesn’t require customer interaction, or else I’d ask her to do that. — BAD FOR BUSINESS

DEAR B.F.B.: You are a caring employer — more than most would be, considering the shape that retail is in these days. Talk to Sara again. Explain that you are receiving complaints from customers and what they have been saying. Give her another chance to improve. If one of your other employees can cover for Sara for a week or two, let Sara have a brief leave of absence to regroup. However, if the complaints persist, let her go, because what’s going on isn’t about her or you, it’s about the health of your business.

DEAR ABBY: My husband is 67 and at least 45 pounds overweight. His breasts could fill a C-cup bra, and his belly looks nine months pregnant. Problem is, he wears running shorts around the house and no shirt. Everything hangs out regardless of whether we’re alone or have family visiting. It’s embarrassing.

When I ask him to dress or at least put on a shirt, he says it’s his home, he can dress any way he wants, and if someone disapproves, they can leave. That’s exactly what I am ready to do. I am disgusted seeing him look like this. Also, when we are alone, he tends to skinny dip in our swimming pool.

I’m afraid our 18-year marriage is over. For the last five years we have lived like roommates with separate bedrooms. Do you agree I should leave? He flat-out refuses any counseling for us. — LOOKING THE OTHER WAY

DEAR LOOKING: You are asking me a question I can’t answer for you. Because your husband refuses counseling doesn’t mean you couldn’t benefit from talking to someone, in light of the fact that you are contemplating such a life-changing decision. Please go, because the answer to your question lies within yourself. 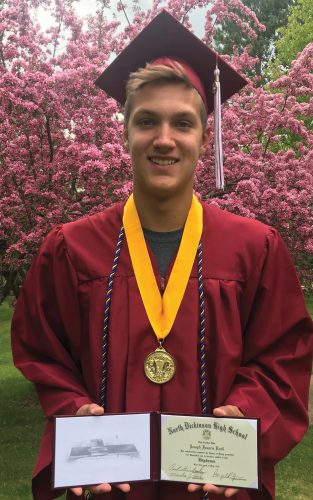