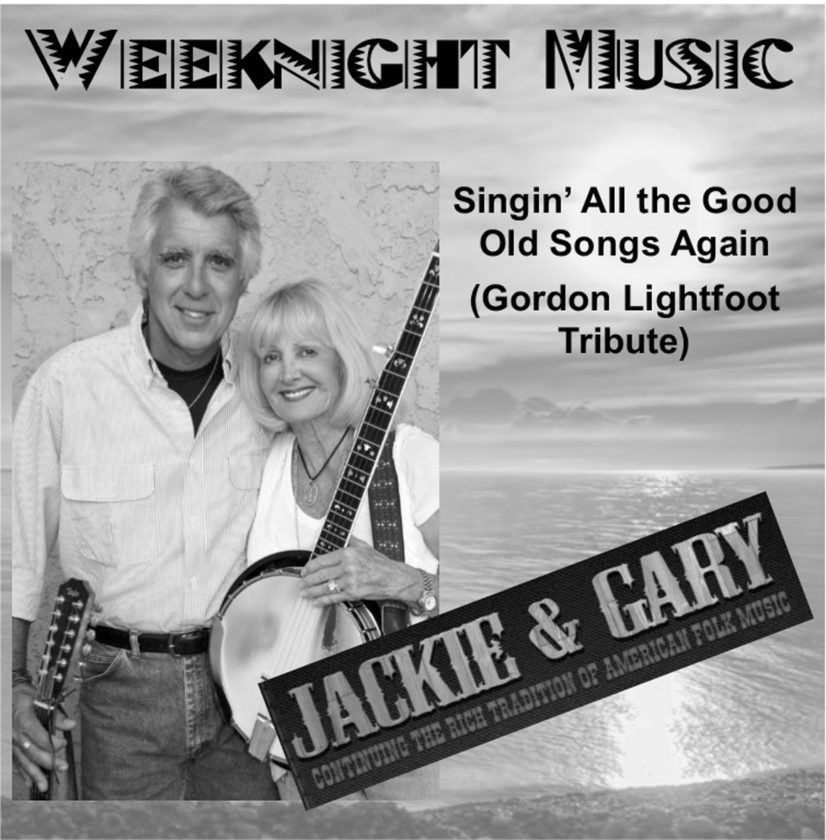 Concert to be held Wednesday

MARQUETTE — Listen to “Singin’ All the Good Old Songs Again” including a Gordon Lightfoot Tribute with Jackie and Gary in this Weeknight Concert at the Peter White Public Library at 7 p.m. Wednesday in the Huron Mountain Gallery on the main level.

Jackie Davidson started music at the age of 15 as a church organist. After college she joined the trio, The Randy Sparks 3, which later became the Grammy award-winning group, The New Christy Minstrels. Performing throughout the country, she had the honor of playing at both the White House during the Johnson administration and Carnegie Hall. In 2010, Davidson joined Gary Brandt.

Gary is a folklorist, singer and songwriter from Michigan. A retired educator and coach, he has performed at a variety of venues. His multimedia program, “Land to the West,” has had over 300 performances across the country and his song, “Somewhere in Montana,” has been featured in western poetry publications.

In their concert “Singin’ All the Good Old Songs Again,” they combine classic and original folksongs in an energetic, entertaining and fun show with lots of audience participation and humor. They will also be including portions of their “Gordon Lightfoot Tribute,” which Gary started in 2013. It will include such hits as “The Wreck of the Edmund Fitzgerald” and “Early Morning Rain.”

There is no admission charge to attend thanks to sponsorship by the Carroll Paul Memorial Trust Fund of the Peter White Public Library. For more information, visit www.pwpl.info or call 226-4318.

NEGAUNEE — At 6:30 p.m. Wednesday, the Negaunee Beautification Committee will be meeting at the Miners Park in Negaunee.

Everyone is invited to join in on this fun and rewarding few hours. Committee members will be raking and waking up the flower beds within the park to get them all ready for the invasion of Marigold Mania in a few short weeks.

MARQUETTE — At 7 p.m. Thursday, as part of its Building Love: Imagine series, the Peter White Public Library will hold its final book study led by Fran Darling on “The Immortal Life of Henrietta Lacks” by Rebecca Skloot in the Dandelion Cottage Room.

Published in 2010, this book examines issues of medicine, ethics and race with the story of Henrietta Lacks, a poor, black tobacco farmer whose cells were harvested when she was being treated for cervical cancer. Skloot writes about Henrietta’s hometown of Clover, Virginia, the “colored” ward of Johns Hopkins, the laboratories where work was done, and her home in East Baltimore. Although her cells aided the medical community in finding a vaccine for polio and developing treatments for AIDS, they were taken without her consent or even knowledge.

Skoot’s work of non-fiction won numerous awards including the 2010 Chicago Tribune Heartland Prize for Non-Fiction, the Wellcome Trust Book Prize, and the American Association for the Advancement of Science’s Award for Excellence in Science Writing.

There is no admission charge to attend thanks to sponsorship by the Peter White Public Library and Forward Action Michigan-UP. For more information, visit www.pwpl.info or call 226-4318.

Tickets are $35 each, and available online at Eventbrite.com. This is an age 21 and up event.

Special guests will be Brigitte and Mariah LaPointe-Dunham from Dancing with Our Stars 2018. A portion of the proceeds from this fundraiser will go to support U.P. Home Health & Hospice. Join in for a lovely evening of live music, a silent auction and a cash bar — all for a great cause. For more details, visit www.uprainbowpride.org.

MARQUETTE — The Peter White Public Library Invites film fans to a free screening of the 2010 modern classic “It’s Kind of a Funny Story” at 6:30 p.m. Thursday in the Business Reference Room on the upper level of the library.

Gifted but suicidal teenager Craig chooses to check himself into a psychiatric clinic expecting that he will be observed, given a little help and released the same day. He finds out, however, that he will have to stay an entire week in the adult psychiatric ward. How will he keep his friends from finding out, and will he get the help he needs?

This film has been selected as part of the library’s Your Mind Matters series of events devoted to topics on mental health.

There is no admission charge to attend thanks to sponsorship by the Friends of the Peter White Public Library. For more information, visit www.pwpl.info or call 226-4318.

CURTIS — The Erickson Center for the Arts, Curtis, announces its second annual Cornhole League every Sunday at 6 ...

MARQUETTE — On Saturday, a vinyl record show will be held at the Olson Library on the campus of Northern Michigan ...

MARQUETTE — The first in a series of free beginner gardening workshops sponsored by Transition Marquette County ...