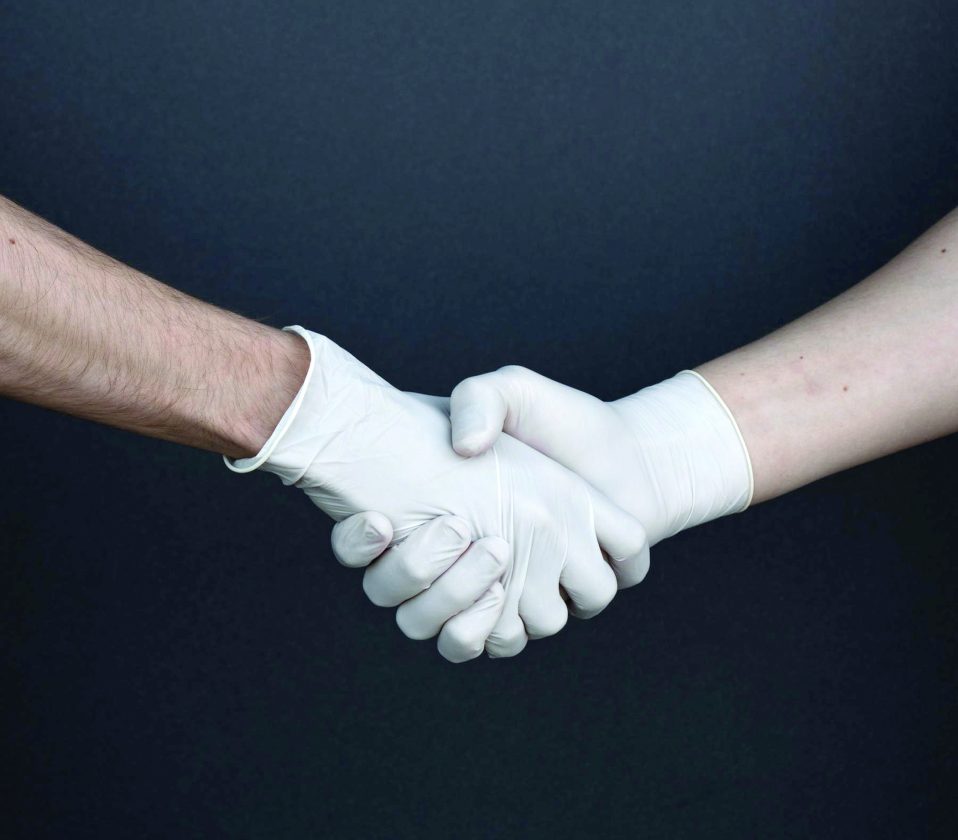 Shaking hands amid the COVID-19 pandemic remains a challenge for many. (Courtesy photo)

After practicing social distancing for three months due to the COVID-19 pandemic, many people are getting back to shaking hands and even hugging, with hand sanitizer nearby. As a result, mayors and community leaders throughout the Midwest agree that while the decision to do so depends on the person and their preferences, everyone should remain cautious and health-minded as they do so.

At Living Hope Church in Alpena, services are currently being held in the parking lot, with social distancing encouraged. People can sit in their cars and listen to the service through their radios, or sit in the parking lot in chairs six feet apart.

While keeping physical distance is advised, many people are so glad to see their friends that they can’t keep from touching them, Pastor Lee Blanchard explained.

“We asked people, ‘Hey, just keep those social distancing protocols, and you don’t have to wear a mask because you’re outside, but don’t touch,'” Blanchard said. “But the excitement kind of overtook people, I think, and all of a sudden we saw a bunch of people hugging, and shaking hands and high-fiving, and, you know, it’s kind of like, you just get caught up in the moment. You’re excited, because you haven’t had physical contact with anybody in months.”

He said that while precautions remain, emotions sometimes take over.

“The caution, I guess, gets overridden by the excitement of physical touch,” he said. “So the next week we reminded people that we’re asking, ‘Please don’t shake hands, please don’t hug, please don’t touch,’ all that kind of stuff.”

He said that he believes it’s only natural for humans to crave physical touch, so the response he witnessed was not a big surprise.

“I think it’s just hard because human nature desires physical contact, and it’s unnatural for our entire society to be completely contactless with each other,” Blanchard said.

Not everyone at the outdoor services preferred the hugging and handshaking. Blanchard noticed in the second week of services that many more people remained in their vehicles.

“I think it freaked some people out, the touch,” he said. “So, we are seeing more people respect that a bit more now, and maintain social distancing, which is good.”

He said they will maintain parking lot services through the summer.

Meanwhile, Alpena Mayor Matt Waligora said it’s up to each person if he or she feels comfortable shaking hands or whether they would rather bump elbows or not have physical contact at all.

Since much of the city’s business has been handled remotely over the course of the last several months, Waligora has not had much in-person interaction with the public in his role as mayor.

“It’s actually come down to a lot of emails and phone calls,” Waligora said of his leadership role.

“I don’t really see a lot of people unless it’s meeting night or something like that.”

Even so, as a business owner and community member, Waligora has had the opportunity to interact with many people outside of his mayoral capacity. He owns a fencing company, Sunrise Fencing, in town.

“My perspective on the whole thing is I be as careful as I can, as most people are,” Waligora said. “I wash my hands a lot. I keep a distance from people. If I walk into a place, I have my mask. If the clerks and individuals shopping are wearing their masks, I put mine on. Mainly out of respect for them. If they’re not, and I’m able to keep a distance from people, I just don’t.”

He said staying healthy is still a priority, but other people’s comfort levels factor into whether social distancing is necessary.

“It’s not so much that I don’t believe (wearing masks) works, because I’m not a scientist or a doctor,” he said. “It’s just uncomfortable and whatnot. But I put it on if I come into close contact with somebody who has theirs on, just out of respect for them.”

As for shaking hands, Waligora said as long as there’s hand sanitizer nearby, he’s game.

“I encounter a lot of people with my business, so I encounter somebody different every couple of days,” he said. “If I walk up and somebody puts their hand out like they would have four months ago, then I shake their hand. Because, from my perspective, it’s very common and very normal. I have hand sanitizer in my truck, and I get back in my truck and I clean my hands off.”

Shaking hands will return as the virus diminishes, he said, but through it all, he advised that people should still be cautious.

“We kind of have to get back to that at some point,” Waligora said. When I shake their hand, they shake my hand, we should assume that there’s a chance that one of us may have the virus, and so we should be careful and wash our hands or sanitize soon thereafter.”

Waligora added that being more vigilant of cleanliness and adding in more frequent handwashing and sanitizing could lead to fewer outbreaks of not only the coronavirus, but other illnesses such as influenza and the common cold.

“I can’t say that I don’t get as near to people as I did before,” Waligora noted. “Because I never really walked right up to somebody and gave them a big old hug or anything.

“But shaking hands, I’d probably say I’m back to doing that as much as I would have before.”

A silver lining to this pandemic could be better hygiene for all, Waligora noted.

“Maybe when we come out of this, and we find the vaccine or whatever it’s going to take, society will be healthier in the end, just from being ingrained with a better hygiene,” Waligora said.

Elsewhere, in Iron Mountain, Jill Mondloch said her ladies pool league is back to normal, with hugging and high-fiving aplenty.

“We had our last night of pool league last night,” Mondloch said on Wednesday. “I’ve noticed that all the women on the pool league, or 90 percent of them, on a normal basis, you win a game, or you shoot a game with them, they give you a hug and ‘good game’ or whatever. Last night, same thing.

Mondloch is the executive assistant and Builders Exchange manager for the Dickinson Area Chamber of Commerce in Iron Mountain, which is located in Michigan’s Upper Peninsula on the border of Wisconsin. Mondloch lives in a neighboring town in Wisconsin.

“It is kind of nice because we have not unlocked the doors yet of the chamber,” Mondloch said. “We are waiting for the (Michigan) Welcome Center to open, because otherwise we would get all of their foot traffic in our office. So we have made the decision to stay closed until they open. And we haven’t really missed a beat.”

She also noted that very few cases have been reported in the U.P., and that low number has remained the same for a while now.

“Yes, people are getting out more, but they are being cautious,” said Bob Byrnes, mayor of Marshall, Minnesota. “They are physically distancing, not socially distancing, and I think that’s an important distinction. They’re maintaining distance, but time is also a factor there, too.”

He explained that the recommendation is to limit the amount of time people interact with others. He also said that he has not noticed people touching yet.

People in Marshall are taking precautions, such as wearing masks and sanitizing their hands, he said.

He added that typically people outside are not wearing masks, but some retail stores require them, and many people are wearing them inside.

As for Byrnes himself, he said he does not feel comfortable shaking hands right now.

In Minot, North Dakota, Mayor Shaun Sipma said the decision whether or not to shake hands right now differs from person to person.

“I think it just comes down to the individual person, from what I’ve seen,” Sipma said. “Even from last night, shaking hands with a couple of aldermen. It was our last meeting. We have hand sanitizer right on our desks.”

He said most people are being conscientious in keeping their hands clean.

“The concern is still out there, for quite a few people, to be precautious,” Sipma said. “By and large, most people aren’t shaking hands. They’re bumping elbows, or an air wave.”

Sipma said he has not been shaking hands very often, as limiting physical contact is the best way to prevent the spread of the virus.

“It just comes down to being prudent, being cautious, being responsible, given the fact that we do have, almost every day, if not every day, one new case of COVID,” Sipma noted. “We take a look around the country where there’s a lot of substantial numbers out there. And some people are doing some traveling.”

He said frequent handwashing and sanitizing and maintaining social distancing will continue to be the norm for him.

“Being mayor, I’d like to think that leading by example does mean something,” Sipma said. “I think that until we get a little farther down the road to truly see the full scope of what the COVID impact is, I don’t have a problem bumping an elbow.” 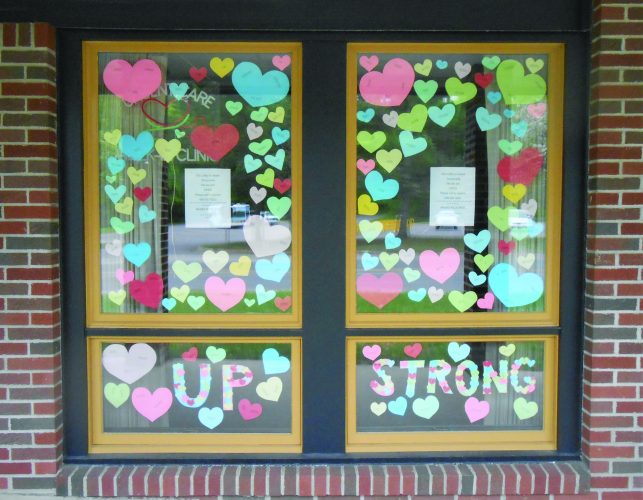