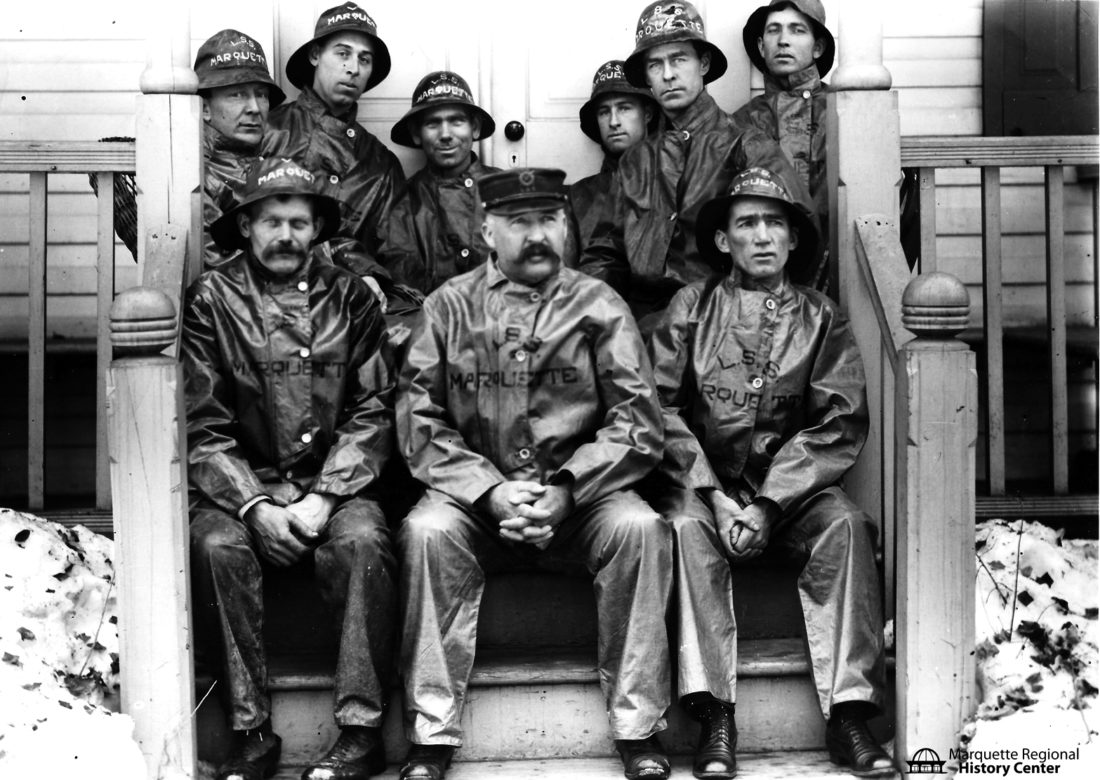 The Marquette Life-Saving crew is pictured. Capt. Henry Cleary is in the front row, center. (Photo courtesy of the Marquette Regional History Center)

MARQUETTE — The first life-saving presence on the Great Lakes began with the Revenue Cutter Service in 1818, but it wasn’t referred to as the Coast Guard until 1846. The Great Lakes didn’t receive funding for life-saving efforts until 1854, and was run by volunteers until 1871. At that point in time, the U.S. Lifesaving Service and U.S. Lighthouse Service were still separate organizations.

From 1846 to 1875, Lake Superior merchants were guided by a few scattered lighthouses which served as warnings and navigation tools, but no life-saving capacity existed to save ship crews caught in storms near Marquette. During this period, over 100 people perished over the course of four accidents.

In 1847, the schooner Merchant disappeared between Keweenaw Point and the Soo with 14 people. 12 people drowned in a collision between the sidewheeler Illinois and the wooden schooner Oriole in 1862. The passenger sidewheeler Superior was destroyed in a gale off Pictured Rocks in 1863, taking 48 people to their deaths. In the same year, the passenger steamer “Sunbeam” capsized off Keweenaw Point, where 25 to 30 people drowned.

The rising number of shipwrecks on Lake Superior, in particular, a three-day-long storm in November 1886 where two boats became stuck on the reefs off the Chocolay River and another two were trapped just off Gaines’ Rock, gave rise to a petition to build a life-saving station in Marquette.

Even though a group of local volunteers rescued all the men from these vessels, the area needed a dedicated and trained life-saving service. The station received Congressional approval in 1888, with construction beginning in 1890 and the station opening in 1891.

Though a lighthouse had been built in Marquette in 1853 and was manned until 1939, the addition of a life-saving service allowed safer travel along Lake Superior. Life-saving crews were known for their courage, ability, and commitment to the preservation of life, of which was particularly evident of the first Marquette life-saving crew.

The first captain was Capt. Henry Cleary as the station’s keeper. He led a crew of eight surfmen known to be the finest on the Great Lakes. As the keeper, he kept track of over 300 separate items, including anchors, brooms, brushes, blankets, beach patrol lights, compasses, dishes, whip lines, boat drags, etc. His job also entailed recording wind direction, temperature, beach patrols, station conditions, the number and type of vessels passing by in the last 24 hours, and comments on wrecks and rescue training.

At the time, the crew used specially designed boats powered by muscle alone. They would row them out to the stranded vessel in distress no matter the weather conditions. The crew never asked if they were going to rescue someone. It was always a question of where.

Capt. Cleary and his crew were most widely known for the rescue of the steamer Charles J. Kershaw. The vessel became stuck on the Chocolay River reef. Though the Kershaw released its barges, which drifted to shore with many men floating to safety, over a dozen men still remained on the Kershaw itself. Cleary and his surfmen set out on their first trip to the Kershaw, and rescued nine men in their surf-boat.

On their second trip, four men were injured by a piece of wreckage, and one boat was destroyed. The surfmen took the remaining life-boat, enlisted volunteers to help and saved the last of the sailors. No one died, and the wreckage of the Kershaw can still be seen in the lake.

The Marquette station was the first to ever have a lifeboat with a gasoline engine, which was developed by Lake Shore Engine Works. Cleary and his men tested the motorized lifeboat on Lake Superior and were cleared to use it by the government. Eventually, all models in the service were based on the Marquette model.

When the crew was not out saving lives, the surfmen were practicing their skills, giving exhibitions and demonstrations to the public, taking care of equipment, and patrolling the beach for vessels in distress.

The crew attended over 1,300 ship accidents. One unnamed admiring sailor wrote, “Many a sailor on both steamer and schooner owes his life to the integrity of those lifesavers.” During public demonstrations, Cleary and his men conducted life-saving drills, such as the popular beach drill and righting the lifeboat.

In 1893, Cleary and his men were sent to display their life-saving skills at the World’s Fair in Chicago for being “the best on the lakes.”

Cleary and his surfmen were paid $50 per month at the time. There were no pensions or financial aid for wounds or disabling injuries. Despite the lack of benefits, people vied for the job, and were proud to be a member of the service.

On Jan. 30, 1915, the U.S. Life Saving Service merged with the Revenue Cutter Service to form the U.S. Coast Guard. Though the name changed, the tradition remained in Marquette.

Today, our reliance on Lake Superior for transportation and trade has decreased, but commercial and recreational fishermen and boaters still take to the open waters, so the Coast Guard station in Marquette is still here. Its officers are on duty 365 days a year no matter what Lake Superior throws at them.

If you found this interesting, come hear some entertaining tales from Jack Deo Thursday night. Fish On! includes vintage photos, great fishing stories (some true!) on record fish, fish camps, Native and commercial fishing and fly fishing legends. This MRHC fundraiser is Thursday, Jan. 18, at 7 p.m. at Kaufman Auditorium. Tickets are available in advance at the History Center, lower level $15/VIP balcony $20 or at the door for $5 more.