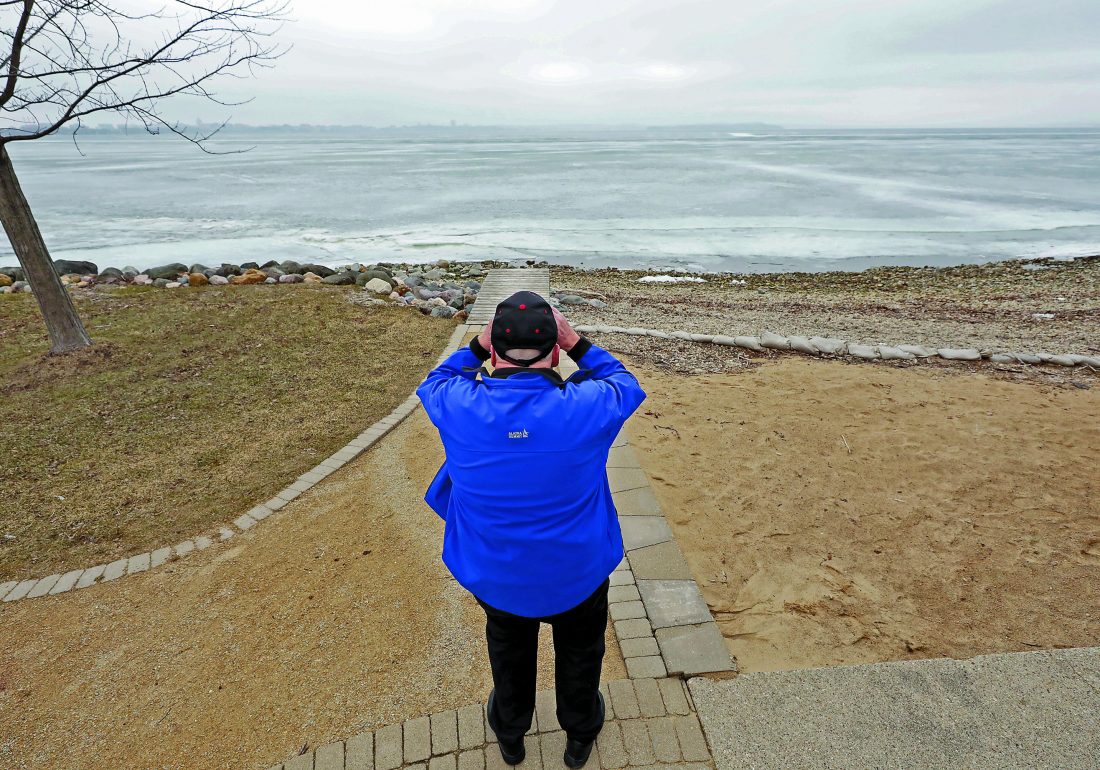 There’s no shortage of it here along the shore of Maple Bluff, but a pair of eagles perched several hundred yards out hint at open water.

According to custom, the lake is considered frozen until you can row a boat the 2.5 miles from Picnic Point.

Hopkins peers through a set of Nikon binoculars, scanning the expanse of gray and white.

There may be some open water, though it could be rain pooled on top. The only way to know for sure is to go out and check.

For now, this lake is still officially iced in.

Hopkins, Wisconsin’s assistant state climatologist, isn’t just curious; he’s carrying out tradition. Every winter and spring since the 1850s, observers have staked out Madison’s lakes to determine when they freeze and thaw, adding to a vast data trove that offers a window into history.

The rules have been passed down by oral tradition.

No one knows who made the first observations. In 1935, the head of the U.S. Weather Bureau’s Madison office compiled a list of dates, cobbled together from various sources.

Hopkins, the assistant state climatologist, has been doing the job for the past 15 years or so, the Wisconsin State Journal reported. He took over from Lyle Anderson, who retired from the state climatology office in 2016 and started recording ice dates in the 1980s and who occasionally fills in for Hopkins.

Times have changed, but the methods haven’t.

“Really it gets down to looking at the thing by eye,” Hopkins said. “While it’s not rocket science, it does tell us if things are changing. You don’t need a thermometer to do that.”

When conditions are ripe for ice to form or melt, Hopkins makes a circuit in his Ford Escape, first checking Lake Wingra, skirting the northern edge of Lake Monona from Monona Terrace to Olbrich Gardens, and then up to Maple Bluff for a look at Lake Mendota before returning to Observatory Hill.

There may be better vantage points to the north and south, but Hopkins sticks mainly to the Isthmus.

“We’ve tried to maintain that same mentality of how it looked to people in 1850,” Anderson said.

As a rule of thumb, Wingra and Monona are considered frozen when they are half covered in ice. At just under 10,000 acres and with its irregular shape, Lake Mendota is subject to another criterion: whether one can row a boat from Picnic Point to Maple Bluff.

According to Anderson, the rule was developed in the early 1900s by Edward Birge and Chancey Juday, who pioneered the university’s limnology program. Both avid field researchers, they were often out on the lake, and ice along that line determined whether they could row a case of beer to their friends in Maple Bluff.

Near the beginning and end of each ice season, Hopkins checks high-resolution webcams perched atop UW-Madison’s 15-story Atmospheric and Oceanic Sciences building at 1225 W. Dayton St., although he complains that new buildings have obscured much of the view.

On average, Lake Monona opens on March 30, about five days before Lake Mendota, but ice out has happened as early as February and as late as May.

As the time gets closer, observations are a daily chore.

Ice can form or disappear overnight. Rain and wind take their toll.

“Fog is a fantastic ice and snow eater,” Hopkins said.

On a recent Thursday afternoon, Hopkins pulled onto Vilas Park Drive and looked out over Lake Wingra, which two days earlier had been 70% ice.

Half century of climate study

Hopkins, 75, has been the assistant state climatologist since 2003 but he’s quick to note he’s spent nearly 50 years in the atmospheric sciences building.

A native of Milwaukee, Hopkins attended UW-Madison in the 1960s, studying earth sciences and education.

After two years in the Army Corps of Engineers, including one tour of Vietnam, Hopkins got a job as a high school teacher, but he was bored with low-level courses, which he described as “more like babysitting.”

In 1971, his sister was studying physics at UW-Madison. Hopkins went to pick her up one day from her work-study job in what was then the meteorology department and thought, “this is interesting.”

Hopkins decided to take a few classes using the GI bill and ended up getting a PhD. His thesis explored the way Milankovich cycles — minor variations in the Earth’s orbit — affect the climate.

From 1996 to 2015, Hopkins wrote daily weather summaries for the entire United States as an educational consultant to the American Meteorological Society, though he has scaled back to weekly newsletters at his wife’s behest.

He has no plans to retire.

He’s contemplating a second edition of his 2002 book, “Wisconsin’s Weather and Climate.” One more year and he’ll have access to a new 30-year set of climate normals.

Hopkins has thought about using satellite imagery, but that would be useless on cloudy days. Drones, maybe.

But there’s a good reason to keep doing it the old-fashioned way.

Changing methods would alter the continuity of the record, said John Magnuson, a retired UW-Madison limnologist who has studied centuries of lake ice records.

“Let’s say we’ve been doing that for a while and all the sudden we have a more precise measure,” Magnuson said. “All the sudden you get a step change or variability.”

Magnuson isn’t against using new technology, but he suggests using it in addition to — not instead of — observations from the shore.

“The new technology is really worth pursuing,” he said. “We may have to be careful how we do it, especially when we start attaching those to 100-, 150-year data sets.”

While the records are less precise, it’s better than a standard weather station, Magnuson said: It’s easy to record and doesn’t require any instruments; it’s an integrated measure influenced by months of preceding weather patterns; and the records predate modern meteorological records.

According to those records, the ice season on Lake Mendota has shrunk by more than two weeks since the 1970s. The average so far this century — about 85 days — is more than a month shorter than it was in the 1800s.

Magnuson studied lake ice records from around the Northern Hemisphere, including one Japanese lake where holy men were writing down freeze and thaw dates as early as 1443.

What he found was consistently later freezes and earlier thaws between 1846 and 1995. While there is some evidence that ice cover was shrinking as early as the 16th century, Magnuson said the rate of change began to accelerate in the late 19th century, around the time of the second industrial revolution when coal and other fossil fuels became the dominant energy source.

“It’s entirely consistent with what we would expect from global warming,” Magnuson said. “These ice records don’t tell us it was caused by greenhouse gases … but it’s consistent with that.”

Hopkins notes that ice seasons on Madison lakes are shrinking even faster over the past 50 years, coinciding with a 5-degree increase in low temperatures during winter months.

In the era of modern records, Lake Mendota has always frozen, but Magnuson expects there will come a time when it no longer does.

Magnuson said the most noticeable impacts will be on cultural activities such as ice fishing. But there would be profound changes below the surface.

On a stratified — or two-story lake — such as Mendota, the water mixes in spring and fall, cycling nutrients. Without ice cover, cycling could continue, altering the ecosystem.

“If it doesn’t freeze you have one continuous mixing period throughout the winter,” Magnuson said. “We don’t go very far down this road before we can’t separate what happens during the summer period from what happens in the winter.”