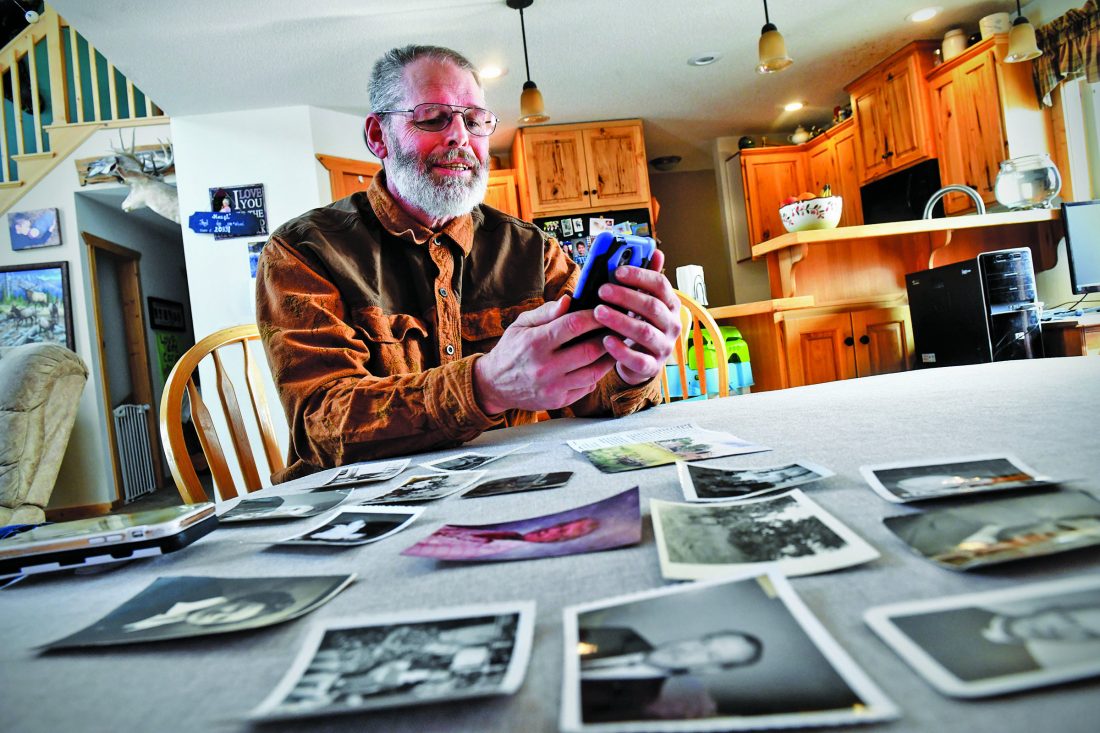 Rick Colbert talks on the phone with Chuck Owen Saturday, Feb. 8, 2020, at his home near Bemidji, Minn. Owen stayed in St. Cloud with Colbert's grandparents 70 years ago. The two were connected after Owen reached out to the community for information on the Colbert family and to thank them for taking him in. (Dave Schwarz/ The St. Cloud Times via AP)

ST. CLOUD, Minn. (AP) — When Chuck Owen spent a summer in St. Cloud by happenstance in 1952, he stayed in a house with a wide front porch on a tree-lined street.

Although some of his memories of that summer are fuzzy, Owen distinctly remembers sitting on that porch drinking lemonade with the couple he stayed with while his mother was in the hospital.

On a recent Saturday, Owen, now age 81, saw that house for the first time in nearly 70 years, the St. Cloud Times reported.

It was shown in an old black-and-white photograph kept by Bemidji-area resident Rick Colbert — who just happens to be the grandson of Richard and Floreine Colbert, whom Owen sipped lemonade with so many years ago.

“It’s in the background there,” Colbert, 62, said, while holding up the photo so Owen — who was in Ohio — could see it through a video call with Colbert. “That would be my dad’s ’58 or ’59 Edsel convertible — and dad and mom and my sister and I.”

Owen and Colbert’s unlikely connection was made possible by the community’s response to a Feb. 2 Times story, “Ohio man seeks to connect with St. Cloud family who helped him in 1952.”

After all these years, Owen hoped to find descendants of that couple and give them “the thank you they have deserved for so many years.”

More than 500 people shared the story on Facebook. The Times then received more than two dozen phone calls, emails and messages about Owen’s mystery.

The community helped cracked the case: The couple who harbored Owen was Richard and Floreine Colbert, who owned Colbert Funeral Home in downtown St. Cloud and lived on the south side of town.

Owen spent about three months in St. Cloud in 1952 after a car crash on U.S. Highway 52 landed his mother in the hospital. After Owen’s father had died of a brain tumor, his mother, Marjorie, planned a cross-country road trip.

A priest from St. John’s University witnessed the car crash and took Owen and his mother to the hospital.

The priest also found Owen a place to stay.

Owen — who now lives in a suburb of Toledo, Ohio — didn’t remember the couple’s names, only that they owned a funeral home and that the man had a pencil mustache.

Once the community identified the couple as the Colberts, Stearns History Museum helped fill in the details.

In 1952, Dick owned the ice cream shop, Betty lived on a farm near Foley with horses, and Douglass was likely in seminary school.

Richard Colbert Sr. died in 1969. Floreine died in 1995. Both lived in St. Cloud their entire lives and were active in several groups in the community.

Dick’s wife, Mary Lou, is still alive at 95 and lives in an assisted living facility; she has no memory of 13-year-old Owen.

Rick lived in the St. Cloud area until 2006, when he moved to Becida, about 15 miles southwest of Bemidji, with his wife, Deb. He owns a dental laboratory business, specializing in dentures.

“I remember the Pig’s Dinner Sundae, anecdotally, because … we had some souvenirs in our garage when I was a kid of some paper fans they gave away with pictures on them that said ‘Dick’s Quality Ice Cream Store,'” Rick said. “And they also had wooden tokens that they gave away that said, ‘I ate a Pig’s Dinner’ if you completed one of those things.”

Rick is pictured in the black-and-white photograph of his grandparents’ house, but he said he doesn’t remember much of it. It was razed a few years after the photo was taken.

St. Cloud State University purchased the house and built a nine-floor dormitory in 1965. The dormitory, Holes Hall, was demolished in 2016. Now it’s a parking lot.

“I have such fond memories of that house,” Owen said, reminiscing about sitting on the front porch fanning himself with a paper fan from the ice cream store.

The conversation sparked a memory for Rick about “the old lady next door they called Aunt Agnes” — Richard Sr.’s aunt who lived next door with her son, Dr. Charles Brigham.

Owen’s face brightened as he, too, remembered the next-door neighbor.

“It’s odd how easily some of these memories are coming back after close to 70 years,” Owen said with a chuckle. “I can’t remember what the hell I had for breakfast — but I remember Aunt Agnes.”

A trip to Minnesota?

Now in his 80s, Owen is making a habit of preserving memories. One way he does that is through a subscription to a service that sends him one question a week — and at the end of the year, all of his answers are bound in a keepsake book for his children and grandchildren.

“I’m having so much fun with it, Rick, because what it is doing is kicking up so many memories that I had forgotten about — and this time in St. Cloud was one of them,” he said.

Owen also volunteers at a hospice program, which has made him realize how important it is to tie up loose ends.

“It is so nice to finally make a connection,” Owen said during the video call. “That is one thing on my — it sounds trite when you call it a bucket list — but this is one thing that I have wanted to do for many years.”

Rick then thanked Owen for reaching out — because if he hadn’t, “we’d have both lost this story,” he said.

So after seven decades, Owen was finally able to say thanks for all the kindness the Colbert family showed him.

“My father had just died, and I was in real danger of losing my mother, and your grandmother and grandfather took me in and, particularly your grandmother, just wrapped me up emotionally and physically,” Owen told Rick. “And I became part of their family.”

“I’m not surprised,” Rick said. “That sounds like them.”

Owen said he is now planning a trip to Minnesota this summer, maybe by train.

“I’m not going to remember much of the city, I’m sure, but it would be fun just to poke around,” Owen said. “I would love to connect with all you guys.”

Rick volunteered to show Owen around town — and invited him to his home in northern Minnesota.

After nearly three-quarters of a century, the connection forged in 1952 still endures.

“I look forward to meeting you in person,” Rick said as he signed off the video call.