A day in the life of a snowplow driver 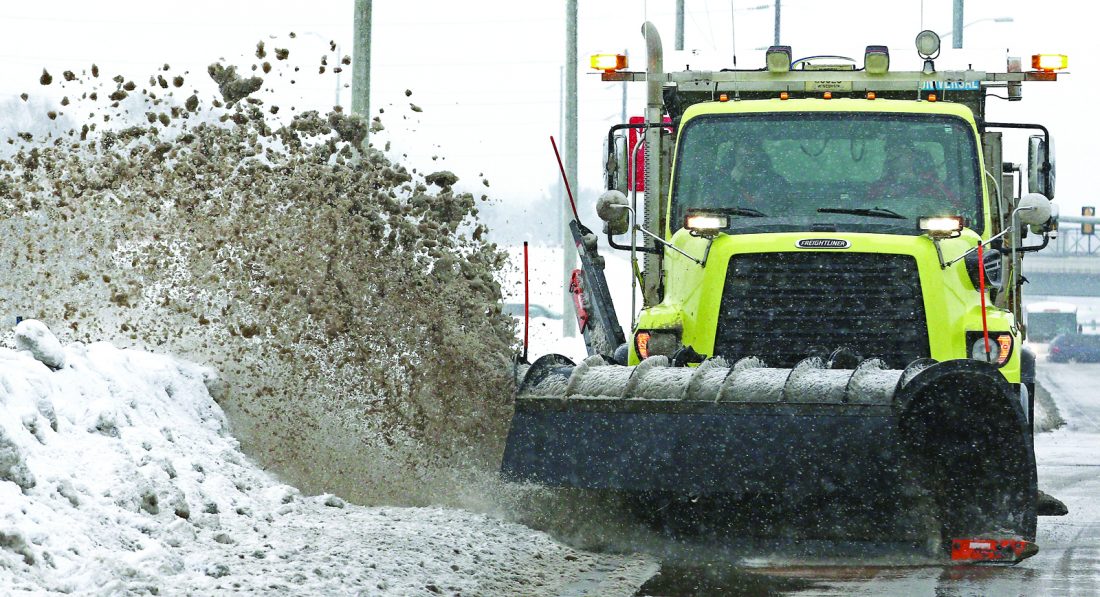 “I learned what to do and what not to do,” Gotlibson said.

Despite that rude welcome from Mother Nature, Gotlibson stuck with it, and this winter marks his eighth consecutive snowplowing season. He is one of a few dozen county workers tasked with the sometimes draining, often unpredictable job of salting and plowing state and county roads during winter, the Leader-Telegram reported.

Gotlibson mainly plows a six-mile stretch of Clairemont Avenue that is also U.S. 12. He has worked the same section every year and knows the location of nearly every curb, median, bridge and gutter.

County Highway Operations Manager Chris Dahlby said the county assigns drivers to plow the same routes as often as possible so they become experts. Depending on the route, drivers often work 14 hours or more during snowstorms. With fresh snow on a recent Wednesday, Gotlibson worked from about 3:30 a.m. to 11 p.m. Drivers are required to have at least six hours of rest between shifts, so he was scheduled to be back on the road at 6 a.m. Thursday.

There are no predetermined breaks, but drivers usually stop every two to three hours to eat, use the restroom, refuel, reload salt or check the plow and truck. Operators must have a commercial driver’s license to run a snowplow, and they usually have a couple weeks of training before plowing on their own. That training involves riding with an experienced driver and operating the plow while the veteran driver observes.

Sipping on a Diet Coke and listening to artists like Aerosmith and Blue Oyster Cult, Gotlibson plowed the far right lanes that Wednesday afternoon. He handles one lane at a time and plows from left to right across Clairemont Avenue, beginning every shift with the far left lane.

Perched high above other drivers on one of the busier roads in Eau Claire, Gotlibson is constantly aware of his surroundings and checking mirrors to gauge the flow of traffic.

“Your head is basically on a swivel,”

Indeed, during a 45-minute trip down and back on his section, Gotlibson made a multitude of small adjustments to avoid trouble. He lifted the front plow so snow wouldn’t spray a person walking on the sidewalk; turned the plow to avoid a vehicle preparing to make a right turn onto Clairemont Avenue; and lifted the plow when going through intersections so snow wouldn’t douse other cars.

Salt prevents snow from sticking to the road, so Gotlibson usually salts the road before plowing, but it depends on the storm. Gotlibson said it took several shifts to determine when and how much to salt his section, which can have positive or negative effects. The same applies to other vehicles; they activate the salt by driving on it but also cause congestion and slow the plowing process.

A driver gave Gotlibson a thumbs-up on Wednesday, but it is more common to hear complaints about why the roads aren’t plowed in a more timely fashion. He said it is equally frustrating for snowplow drivers to be stuck in traffic as everyone else and prefers driving his route at night because there are many fewer vehicles on the road.

Most shifts go smoothly, but other vehicles and difficult weather present constant challenges. Several years ago, one driver’s car was severely damaged after trying to pass Gotlibson’s truck on the right side and hitting the plow.

There are innumerable types of those two categories, though, and Gotlibson said the worst kind involves low temperatures and high winds. Subzero temperatures make it tougher for salt to work on icy roads, while wind blows the snow and reduces visibility.

“You’ll get the road cleared and a couple hours later it’s drifted right back in,” Gotlibson said.

Gotlibson plows once or twice per week on average, but that number fluctuates based on snowfall frequency. Gotlibson said last February, which featured a monthly record of more than 53 inches of powder for Eau Claire, was the most challenging stretch of his time on the job.

Before he started, Gotlibson underestimated the time-consuming demands that accompany snowplowing, saying it takes at least four hours after a storm concludes to clean up the roads.

Dahlby agreed and praised drivers for their diligence. He said one of the most challenging aspects occurs near the end of a large storm, when employees have likely worked lengthy hours for multiple days and want to go home but don’t know exactly when their shifts will be over.

Dahlby and County Highway Commissioner Jon Johnson both stressed the dedication and work ethic necessary to be a successful driver. The job often results in long, unusual hours, and Johnson said about 85% of the Highway Department’s overtime pay occurs in winter.

Gotlibson cited patience as a vital aspect to doing the job well. Clearing the road sometimes involves incremental progress, especially during rush hour, but he said it is rewarding to see freshly plowed roads.

As winter continues, expect to see snowplow drivers like Gotlibson out in full force to steadily make roads safer.