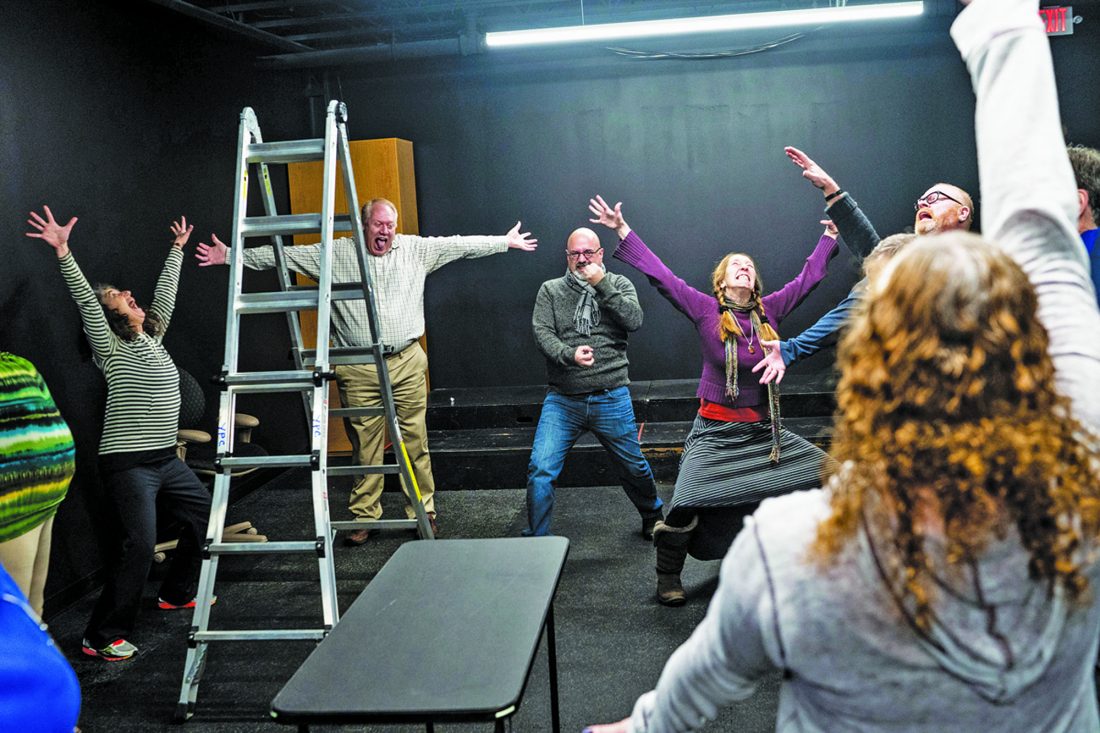 In this Monday, Jan. 13, 2020, photo, cast and crew members of Theatre 55's production of "Urinetown," warm up before rehearsal inside of Youth Performance Company in St. Paul, Minn. Founding artistic director Richard Hitchler, center rear, told Minnesota Public Radio News that staging a musical involves all kinds of things people are supposed to do after they turn 55 Ñ they memorize words and music, they sing, they move and they build a community through intense rehearsals. (Evan Frost/Minnesota Public Radio via AP)

ST. PAUL, Minn. — On a Monday night, the start of the second week of rehearsals, a group of actors gathered in a circle, stretching and working through vocal exercises. They’re like actors putting together a show at any other theater, except for one thing: their age.

This is Theatre 55, a theater that works with actors who are 55 and older. The group is rehearsing its third show, “Urinetown,” the Tony Award-winning musical satire about government, corporate and social systems.

“My desire was to fill a niche that wasn’t there, and that ended up being theater for people 55 and older,” said Richard Hitchler, the founding artistic director of Theatre 55. Hitchler is the former artistic and executive director of SteppingStone Theatre, which caters to young people.

He told Minnesota Public Radio News that staging a musical involves all kinds of things people are supposed to do after they turn 55 — they memorize words and music, they sing, they move and they build a community through intense rehearsals.

“It’s about movement, it’s about physicality, it’s about using your brain, it’s about socialization,” he said. “It’s about being out there with like groups of people that are like-minded. It’s about really just being human.”

The theater takes measures to accommodate a troupe of older actors. Hitchler puts in more lights to help vision; he prints out scripts with bigger fonts. And the creative team tries to design sets that aren’t too physically challenging and have chairs for actors so they aren’t on their feet all the time.

Theatre 55’s first musical was “Hair,” a big draw for many veterans of the Twin Cities theater scene. Many saw it as an opportunity to perform in a musical that defined their youth.

“‘Hair’ kind of opened my eyes to the idea of the opportunity to take on a role that you maybe would never have a chance in conventional theater to do,” said Wes McClain, 67, who is now in his third show with the company.

McClain also said this theater seems to create deeper bonds of community in each production, in part because of the work of the leadership, but also because of the age and range of experience among the actors.

“I have found it has been such a treat to build new friendships with people who are my age, in a way that you often don’t get a chance to do otherwise,” he said.

The casts are a mix of experienced actors like McClain and people who’ve dabbled in the arts or always wanted to act and sing in a musical.

Brenda Starr sang in choirs and acted a bit until about 35 years ago, when she got busy with her career. She jumped at the opportunity to audition for “Hair” in 2018.

“At 72, people are looking at what you can’t do. Society says you no longer have voice, you’re a taker rather than a contributor,” she said. “They dismiss you. And so, Theatre 55 is exactly the opposite.”

Starr fell immediately in love with all of it. She took part in a few weeks of initial rehearsals, and then they broke for Christmas. A few days later, director Hitchler got a call from Starr. She was in the hospital.

“About 3 o’clock in the morning I got a phone call saying, ‘I’m in the hospital, I had a heart attack, but I’m OK. My doctors have told me I can come back and I’ll be there and I’ll be ready to go,'” Hitchler said. “And I said, ‘Are you serious?’ And she said, ‘Absolutely!'”

The heart attack was a wake-up call — and the beginning of a new chapter. Starr said she’s now taking much better care of herself, spreading the word about heart health and looking for more roles in theater productions.

Tickets for Theatre 55’s production of “Urinetown” are on sale online. The show opens Feb. 28 and runs through March 15 at the Illusion Theater in Minneapolis.