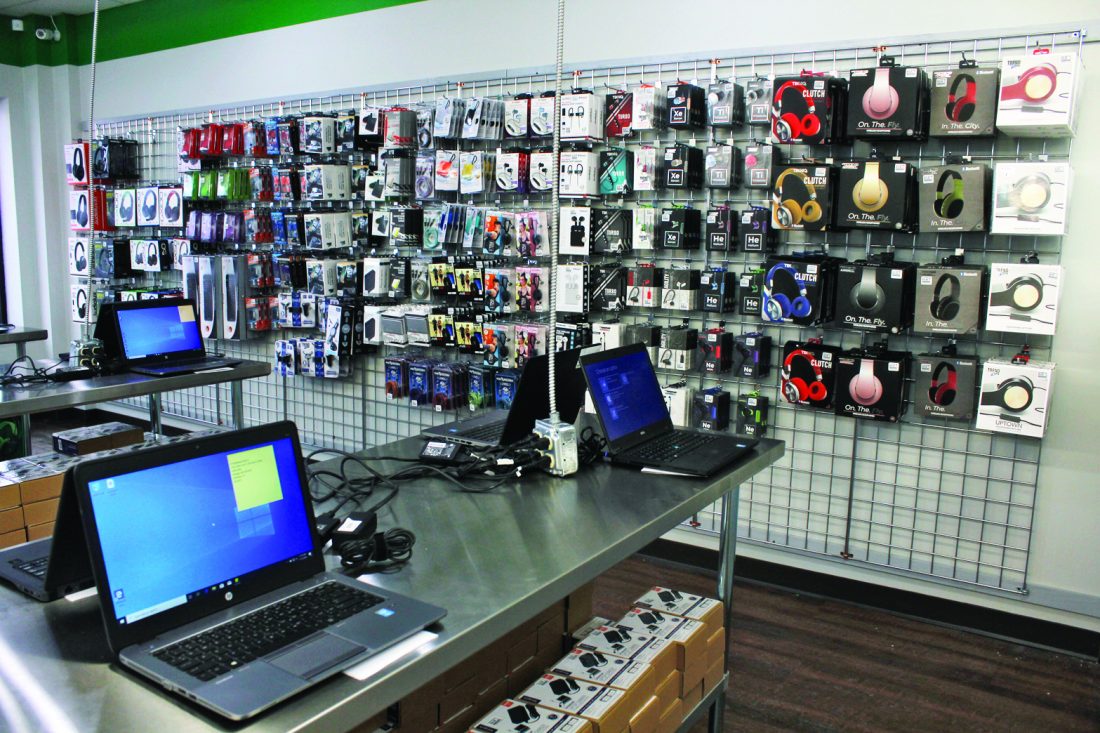 The inside of the Marquette Comprenew is pictuerd. The store is located at 3125 US-41 in Marquette and resells refurbished and recycled electronics. (Journal photos by Trinity Carey)

MARQUETTE — You’ve just upgraded your television to a brand new flat screen, but now what do you do with the old one? The simple solution would be to put it in the trash like other waste, but electronics pose harmful threats to the environment if not properly disposed of.

Comprenew is working to reduce the impact of unwanted electronics on the environment and a Marquette storefront was opened Nov. 1.

Comprenew is a nonprofit organization that “strives to protect business, people and the environment from the threat of improperly disposed electronic devices through best practice technology data management, asset recovery, and recycling services, while fostering job readiness and computer literacy among at-risk populations in our community,” its website states.

The Comprenew Marquette retail space is located at 3125 U.S. 41. It’s located next to Goodwill, a nonprofit organization that partners with Comprenew.

“The main goal –outside of retail space — is the recycling side of it,” said Marquette Comprenew General Manager and Loss Prevention and I.T. Manager for Goodwill Justin Borowski. “We are R2, e-Steward certified, that’s in partnership with Comprenew out of Grand Rapids. And the goal is to keep electronics out of landfills and not sent over to third world countries. So, it’s full, end-of-life recycling down to core components, elemental metals, things like that. And again, the goal is to provide a resource for people to recycle electronics. We know there’s a ton out there and there’s not a ton of places to get rid of them properly, so we’re trying to fill that void here in the U.P.”

Often, the disposal of electronics means shipping them to different countries such as China, where electronics are burned or melted down instead of shredded and separated, Borowski said. However, Comprenew’s downstream recyclers are certified by the state of Michigan and the federal government. They do not send the materials they receive overseas or to landfills. Instead, depending on the material recycled, the electronic device is broken down into its core components and recycled.

“So something like a flat-screen TV, the plastic would be separated out and then the metal components and then the harmful stuff –like the mercury from the bulbs and the balance that light up the TV –are then separated and disposed of,” Borowski added.

A material often improperly disposed of is cathode-ray tubes which can be found in older, larger televisions and computer monitors, he said.

“As we transferred into the flat screen era, for lack of a better term, we didn’t really have a plan in place for end of life for a lot of the stuff. And those cathode-ray tubes have lead and mercury in them, so the common practice previously has been just to toss them in the landfill right, then bring it to the local landfill or toss it in your dumpster to get rid of it that way. That’s bad obviously for the environment,” Borowski said. “The Father’s Day flooding in Houghton was found to be caused by illegal dumping of things like old mattresses and TVs, so the impact on our society and our communities too is very much real from dumping illegally and not disposing of this stuff in the proper way.”

According to its website, Comprenew began as a for-profit refurbisher of mainframe computer equipment in 1986, but with the increase of personal computer purchases, it saw a need to expand its recycling program to reduce the environmental threats posed by electronic waste. Comprenew storefronts mitigate e-waste by giving electronic devices another chance at life, Borowski said. Computers donated at the Goodwill store can be refurbished by Comprenew staff and other electronics are tested for “core functionality.” The refurbished and recycled devices are then put out on the shelves for purchase.

“Our storefront here, we have a mixture of donated and new goods, very similar to our Goodwill stores. We also have fully refurbished computers with Windows licenses. We’re a Microsoft-certified refurbisher as well, so we work with our partners down in Grand Rapids to have those for resale at affordable prices. And then we have tested electronics too,” he said. “That gives it another chance to stay out of the landfill and stay out of that downstream stuff.

Borowski noted that electronic devices should be dropped off at the donation doors of Goodwill just like any other donation to the store. Almost any type of electronic device is accepted except those which contain freon or coolants, though there are small fees for the donation of flat screen and cathode-ray TVs, and printers to cover transportation and downstream costs.

When looking to dispose of an electronic device, everyone should consider Comprenew, Borowski said.

“Our goal here is to be the environmental steward for our planet, the best one that we can be. We’re working with the (Department of Great Lakes, Energy and Environment) with the state of Michigan and we’re working to establish permanent collection sites to make it easier for people to donate this stuff and give people the avenue to dispose of this stuff properly,” he said. “We have so many electronics in our everyday life now, they’ve become so cheap and affordable, just ubiquitous. And what do you do with them at the end of life? There’s kind of no option to get rid of this stuff, so we’re really trying to provide that option for folks and give them the ability to do it properly.”

He hopes to see Comprenew expand its reach and provide tech knowledge, as well as affordable electronic devices to communities.

“My goal would be to have a Comprenew representative in every one of our Goodwill stores that could be a resource for the community and we’d really like to reach out and bridge the digital divide that exists especially in the U.P. and really educate people and give people access to technology that they may not have had before,” Borowski said.