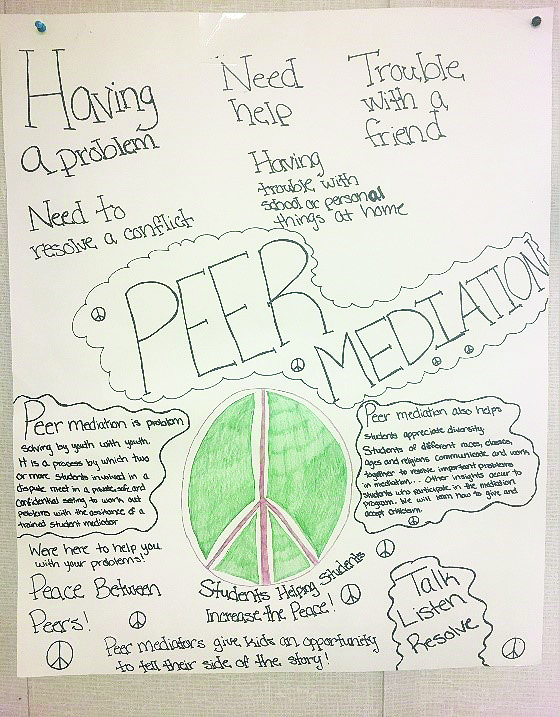 MARQUETTE — Sometimes a subtle approach works better in a school setting than zero-tolerance policies such as suspension and expulsion.

Jennine Frazier, executive director of the Marquette Alger Resolution Service, said the organization has been addressing safety and bullying issues in schools through what’s called “restorative justice mediation” for many years.

The goal of restorative justice is to build relationships and a sense of community, prevent conflict and wrongdoing, and respond to wrongdoing by trying to prevent harm.

“We do a lot of adult mediation where we’re helping people in conflict, whatever it is,” Frazier said. “It could be neighborhood disputes or it could be difficulty trying to figure out a parenting schedule among parents.”

At the heart of the organization, though, are its school programs, which she called an extension of what MARS does: helping students learn conflict-resolution skills.

“They’re learning about what conflict is, learning how to deal with conflict in their everyday lives,” Frazier said, “and this takes a lot of different forms.” For example, she said it addresses what could be misunderstandings where students don’t yet have the tools to communicate their feelings and resolve the issues.

Students in Marquette Area Public Schools should learn some of these tools this year.

Frazier said she plans to teach three sessions to health students at Bothwell Middle School who will learn about conflict resolution.

At North Star Montessori Academy, MARS uses restorative justice where adults come in and deal with mid- to higher-level conflicts and sit down with the students, sometimes in the presence of school staff, she said.

“We talk about what the issues are, make sure both sides understand one another, and then we write a formal agreement of how to bond,” Frazier said, “and that agreement is generated by the participants, not by us. We’re just mediators.”

There’s a reason behind that process.

“When you do that sort of thing, when you’re generating your own agreement, your own plan to resolve a conflict and move on with your life, we find that 85%, and even higher numbers than that, students stick to their agreement for a resolution,” Frazier said.

A relatively new effort is the Peer Mediation Program, now in its second year at North Star. The program is a school-wide system that addresses minor conflicts between students in kindergarten through 12th grade.

She called it an “incredible experience.”

“The school has embraced the restorative justice model, wanting students to learn their own conflict-resolution skills, and also wanting students to be empowered to take care of issues such as bullying and knowing how to do it, issues between friends — just all that sort of thing,” Frazier said, “and then what has been really inspirational is that the students then write referrals for themselves to do this.

“They are volunteering to sit down with other peer mediators and take care of their own problems.”

Frazier said she teaches students in grades seven through 12 to become peer mediators, who then are better able to work with K-12 students.

She comes to the school, usually several times a week, and gets two trained peer mediators to meet with the students who are having issues, with Frazier present. They then write an agreement.

Frazier is particularly pleased with how things are going this year.

“We’ve already started having students write referrals, which is so nice because now I know they use the tool for peer mediation,” Frazier said. “It works, because the word has gotten out that students are very interested in using this program, and it’s something they can rely on.

This year, 19 kids at North Star have signed up to become peer mediators.

“That means they want to help out,” Frazier said. “They want to be there for their fellow students. They see that this program is very valuable and have seen that it makes a difference, and they want to be a part of this.”

Referral forms at North Star, she said, are in the school hallways and with teachers. The mediation then takes place as soon as possible.

Andrea Ballard, superintendent/principal at North Star, is also pleased with the results.

“The Peer Mediation Program at North Star has been effective in teaching students the skills that they need to resolve conflicts,” Ballard said in an email. “Our goal is to help our students feel empowered to solve their own problems in a supported environment.”

Frazier believes the program is more effective than simply telling a teacher, administrator or adult what to do.

“The peer mediators, especially some of the older ones, they’ve already been through a lot of those situations,” Frazier said. “They know what it feels like to be misunderstood or in a fight where nobody’s listening to one another.”

A 48-hour mediator training program titled “Learn to Mediate!” is scheduled for 8 a.m. to 5 p.m. today, Sunday and Friday as well as Nov. 9, 10 and 14 at Temple Beth Sholom, 223 Blaker St., Marquette. The cost is $100, with scholarships available. To apply, visit marsmediation.org. For more details on the program, call 906-226-8600 or email director@marsmediation.org.