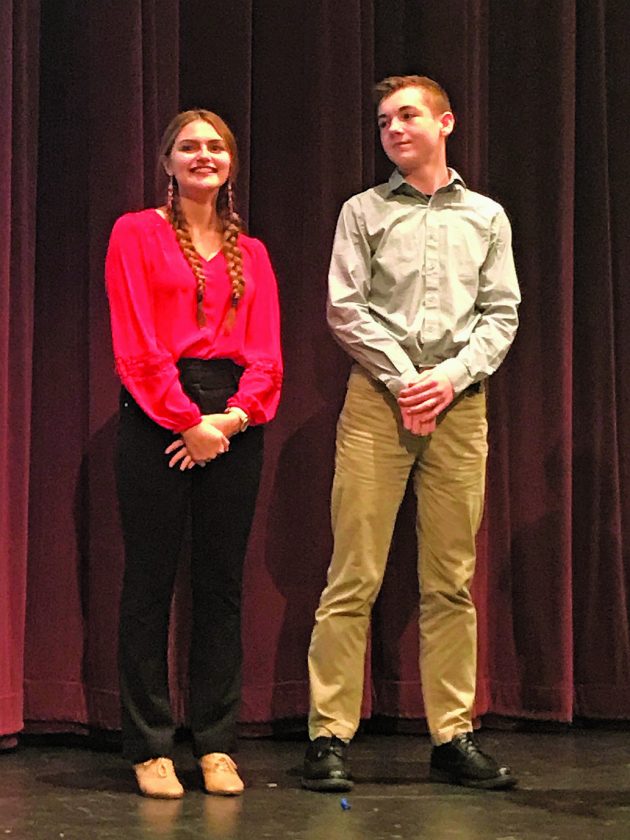 Roxy Sprowl of Marquette Senior High School and Anthony Gleason of Negaunee Middle School are the winners in this year’s Tom Baldini Soapbox Showcase. A panel of judges picked Sprowl as the overall winner while Gleason was named the winner of the Student Choice Award. (Journal photo by Christie Bleck)

MARQUETTE — Eleven Marquette County students had something important to say, and believed in their viewpoints so much they got up in front of a large audience on Tuesday at Kaufman Auditorium for the second annual Tom Baldini Soapbox Showcase.

Named after the late Tom Baldini, a longtime public servant and former educator, the civic engagement event calls on area youths to speak out on issues that affect them and their communities.

Over 850 students from across Marquette County participated in their schools for the event, with the finalists chosen to present their talks on Tuesday.

This year, a panel of judges named Marquette Senior High School student Roxy Sprowl the winner. Her talk was titled “Moving Beyond Whitewashed History.” Sprowl will travel to Washington, D.C., in July as part of the Mikva Challenge for Soapbox Nation.

Brian Brady, president of the Mikva Challenge, said in an email the students take a two-day trip accompanied by a parent and with 20 other winners from around the United States. They will give their speeches at the Kennedy Center and in Lafayette Square across from the White House. They also will visit Capitol Hill to talk to members of Congress about their issues and discuss with professional lobbyists how to get lawmakers to hear their voices.

The students might take in a little sightseeing, with past participants usually visiting the National Museum of African American History and Culture and the United States Holocaust Memorial Museum, said Brady, who pointed out the trip and Soapbox Nation are made possible with support of Facebook Education and the Mikva Challenge.

“I’m really excited to be a part of D.C., and everything,” Sprowl said after the competition, “and I just am even more empowered by the fact that I was able to speak my voice and speak up for my people.”

Sprowl, a Native American, infused a lot of passion in her talk.

She mentioned some sobering statistics.

“In America, one in three black men can expect to go to prison in their lifetime, near 2¢ times more likely to feel a bullet through their veins at the hands of a police officer,” Sprowl said. “One in every four Native American women are raped, indigenous children are 2¢ times more likely to end up in the foster care system and 20% of Latinos are told to ‘go back to your own country.'”

Sprowl said that in her 17 years, she has yet to see a textbook representation of a Native American who looks like her.

Education is key, she said, and that includes people talking to legislators and educators to ask for representation for their sisters, brothers and classmates of color.

Sprowl finished her speech by reciting the Pledge of Allegiance, but ending with “liberty and justice for whom?”

He took particular issue with the emphasis on test scores in the school system.

“While there are some benefits to our current educational system, there are many expectations that limit students to reach their full educational potential,” Gleason said.

He called school “a prison cell that you can’t escape from for seven hours a day,” and went into more detail.

“Instead of learning how to handle bullies, rejection or stress, we spend most of our time memorizing data and facts for the upcoming standardized tests,” Gleason said.

He urged the audience to be open to a new educational platform that’s not based on individual test scores but instead highlights the individual needs in the classroom, and recommended school leaders to provide a curriculum that stresses the importance of mental health.

“We encourage you to take that passion, go further and also support each other,” Cambensy said.

McBroom called for a mutual tolerance of opinions.

“In this day and age with politics, everything is so divided and people get so angry when somebody doesn’t agree with them, and our country is not built on that ideal,” he said. “Our country is instead built on the ideal that we can share ideas.

“We can disagree and still recognize each other’s value, each other as Americans, as people with common interests to see our families thrive, our communities thrive, and Rep. Cambensy and I work hard on that here and try to spread that message, and it’s great to know that you’re working on the goals as well back in Marquette.”