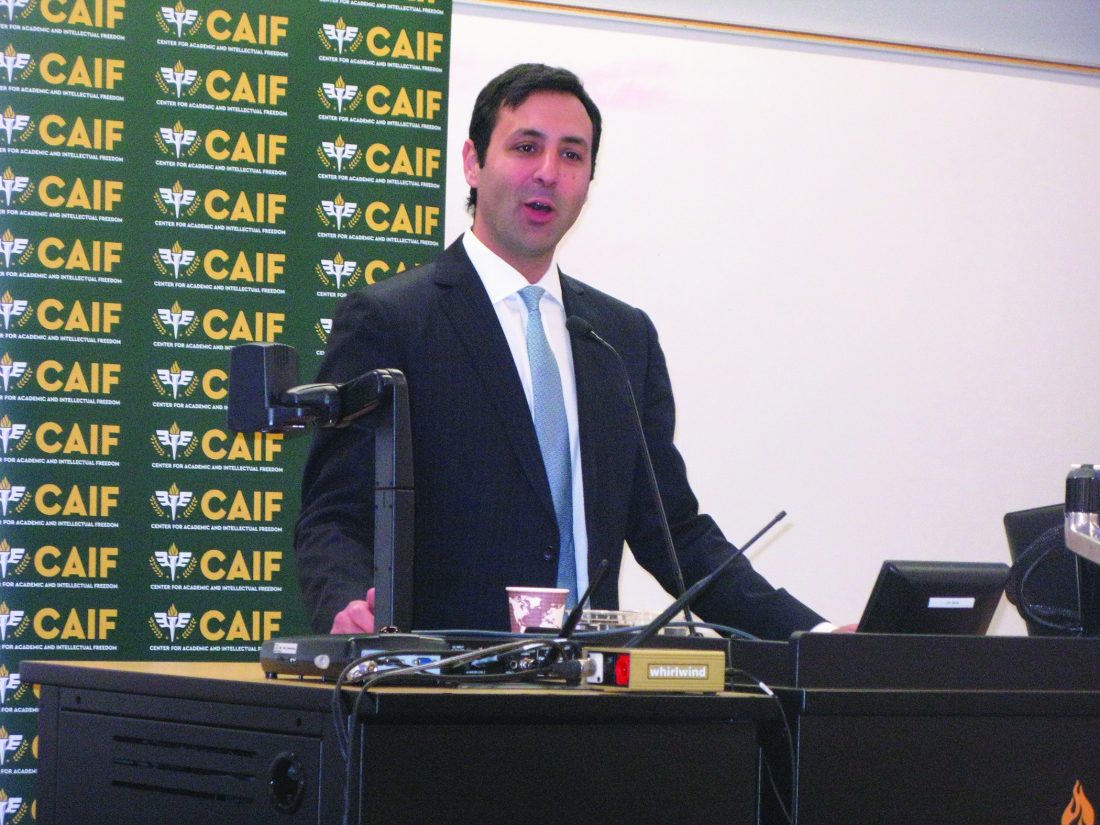 Arthur Milikh of the Heritage Foundation discusses hate speech on Monday at Northern Michigan UniversityÕs Jamrich Hall. The lecture was presented by NMUÕs Center for Academic and Intellectual Freedom and sponsored by the College Democrats and College Republicans. (Journal photo by Christie Bleck)

MARQUETTE — How does hate speech operate in today’s society? It’s not one simple answer. Instead, it can be many involved ones.

Discussing this topic and providing his varied explanations on Monday at Northern Michigan University’s Jamrich Hall was Arthur Milikh of the Heritage Foundation, who gave a lecture presented by NMU’s Center for Academic and Intellectual Freedom. Sponsoring the event were the College Democrats and College Republicans.

“I think that this term, even though it’s thrown around, very frequently we don’t really know what it means,” Milikh, the foundation’s associate director and research fellow, said about hate speech.

His said “restriction advocates” want to get rid of particular forms of hate speech while allowing and encouraging other forms.

Milikh said that beneath the demand to criminalize hate speech is the same theory on which identity politics is based.

In the United States, there’s a push to outlaw hate speech in universities and the big tech world, with Twitter, Facebook and YouTube “tightening the leash” on what they believe is hate speech.

The top reason people have freedom of speech, he said, is because there’s a belief in the freedom of the mind — that the pursuit in an unobstructed way of the truth is a fundamental human good.

“The freedom of speech is a fundamental right because it is believed by this liberal tradition, that I am a defender of, that your mind belongs to you, and only to you,” Milikh said, “and therefore your speech, as an expression of your mind, also belongs to you.”

Freedom of speech also is needed for self-government, he said.

“Free speech is absolutely essential for self-rule,” Milikh said. “If you want to have political liberty, you have to have citizens that are free to discuss the public good, public policies, laws, the direction of the nation, in public.

“Without the freedom of speech, you are not ruling yourself. Somebody else is ruling, and the question becomes who that is, or what that is.”

He speculates that in the United States, the likely scenario would be a combination of a press that has made a truce with an administrative state to rule the nation, not citizens ruling themselves through elected officials.

“In opening our souls or our minds, whatever word you prefer, to being able to persuade and be persuaded, it undermines fanatical tendencies, us holding on to false beliefs no matter what,” Milikh said. “It means we can be open to being persuaded, and that we don’t have to use manipulation and force against our fellow citizens.”

Various hate speech laws throughout the world, he said, ban speech deemed harmful to what are considered marginalized groups, such as racist, sexist and anti-immigrant speech.

Milikh used as an example a law in Canada that defines hate speech as any notice, sign, symbol, emblem or other representation indicating discrimination or an intention to discriminate. In 2016, the law was expanded to include “misgendering” people.

He said these types of laws in Europe haven’t worked.

“They have not reduced violence as they have promised,” Milikh said. “In fact, you are something like 11 times more likely to be subjected to violence if you are a Jew in England than in the United States, which does not criminalize hate speech.”

The main arguments that advocates for the criminalization of hate speech put forth include physical ailments and harm, hate crimes, marginalized groups being prevented from going into politics and harming of dignity, he said.

“The radical goal, I think, behind this push to criminalize so-called hate speech is to silence, I think, the human capacity for judgment and therefore reason,” Milikh said.

He rejected the idea of people being rude or “gratuitously cruel” to each other.

“I’m talking about a high-level debate of public policy issues that must remain in the public square if our nation is to endure,” said Milikh, who called for kindness, a belief in tolerance and being a free political society that openly thinks through questions that affect its future.

Following his talk, members of the College Democrats and College Republicans questioned Milikh on various aspects of his speech, including dealing with public disagreements “before it’s too late.”

He acknowledged that’s one of the biggest challenges.

“I do very much believe that we should be respectful and courteous to our fellow citizens,” Milikh said. “That’s without question, and yet, I don’t think that this logic of identity politics as I’ve laid out is one that is suited for a people that believes in political liberties.”

The CAIF’s website at TheCAIF.org said the organization “provides a unique space for thoughtful reflection and reasoned civil dialogue in a time of political polarization among mutually uncomprehending extremisms, dogmatisms and institutionalized thought-policing.”