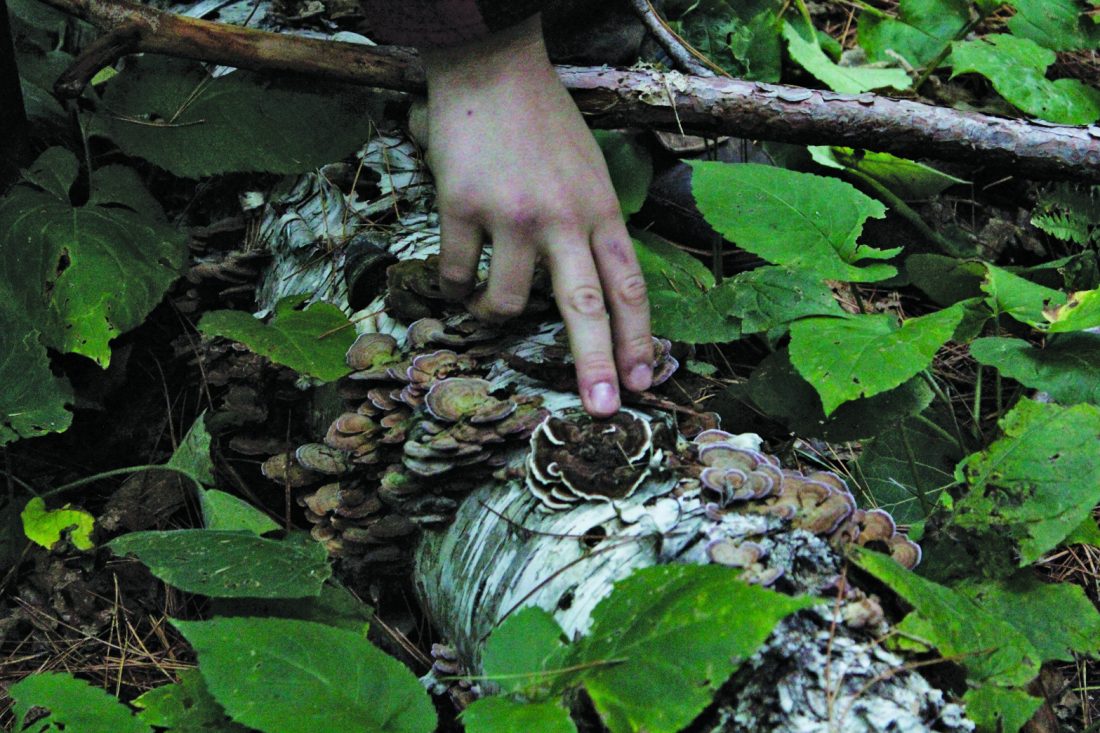 Mushroom Joe shows attendees of the Foraging Workshop a fungi species on a fallen tree. (Journal photos by Trinity Carey)

Attendees learned about plant and fungi identification as well as the edible and medicinal properties of found species during the event.

Led by Joe Lane, also known as “Mushroom Joe” led the walk through the woods and identified foragable plants and fungi that can be found in abundance in Marquette.

There are many benefits to foraging, he noted.

“I think connecting with your food is really important,” Lane said. “I get a lot of people contacting me about wild mushrooms and they’ll show me pictures of these half decayed mushrooms and be like ‘oh, can I eat these?’ You could have if you had found them earlier. “We’re talking about food this isn’t just something to do, this is actual food. It’s just reconnecting with your environment. To take it deeper into the science, I think the microbiome and eating wild food that’s covered in dirt and grown in dirt exposes your stomach and the ecosystems that reside within you to new things as well as local things, local microbes and some of those things in theory can help mitigate allergies and stuff like that.”

Species found along the walk included the Chaga mushroom, a fungus that grows primarily in cold climates on birch trees. The mushroom has the appearance of burnt charcoal and should be harvested with care so that the birch tree isn’t harmed.

The Artist Conk mushroom, you may have seen hanging from the sides of trees, was seen and its outer edge was harvested for tea. Lane noted that just the edge of these mushrooms should be harvested as the base will continue to regrow the edge if unharmed.

Another mushroom commonly seen growing on the sides of birches is the Birch Polypore, which can be used as a bandaid. Lane harvested one from a tree and cut a thin long paperlike strip from the thick but flat fungi and showed how it can adhere to the skin.

Elderberry trees, though not fruitful, were identified. These plants are known for their anti viral and anti inflammatory properties as well as their high concentrations of vitamin C and often used to treat the common cold.

Broadleaf Plantain plants, which are often mistaken for weeds and can be found even in backyards, was pointed out by Lane for its medicinal properties. The leaves of the plant are edible and once briefly chewed, the poultice is mildly antiseptic and can be placed on bee stings and cuts to relieve pain.

Foragers also found a Sarsaparilla plant. The plants roots were traditionally used in the making of root beer.

Edible plants and mushrooms found along the walk were added to a tea, which was shared among the foragers afterward.

“You can really just go on a hike anywhere and you’d be surprised if you know what you’re looking for,” Lane said.

Other medicinal or edible plants and fungi that can be found in the area include many types of berries such as thimbleberries as well as rosehips, honey mushrooms, rock tripe, morel mushrooms and mica caps.

Lane hopes more people come to understand that the plants seen when out hiking aren’t just weeds, a word he isn’t fond of, because oftentimes these commonly seen species have beneficial qualities to them.

For those who are interested in foraging, but aren’t sure where to start, Lane recommended reading and researching the topic as well as joining one of the many Facebook groups focused on foraging and the identification of foraged plants and fungi.

“Buy a book, thumb it over, grab a couple things, take pictures of some things that look interesting and then try to ID it,” he said.

Lane specified how important it is to always identify your foraged goods with a second source to make sure what you plan to consumer or use medically is safe.

“You’re always liable for what you consume,” Lane said. “There should be no liability on somebody else. If you’re skeptical, which you should be, you should always get a second opinion, always be sure, always be safe, it is food. If you wouldn’t eat a piece of steak that looks like the pile of slimy mushrooms you found that is edible, you might just have to learn that it was edible.”