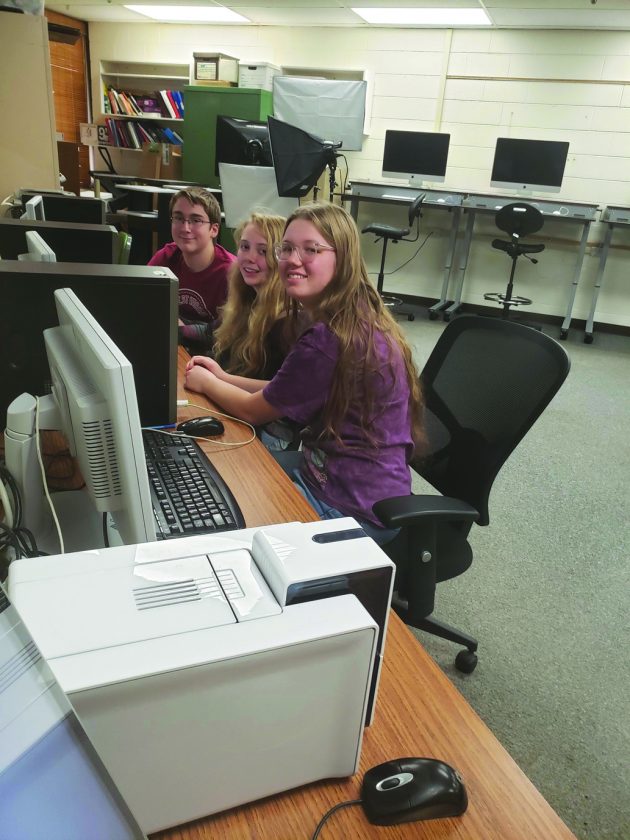 The Patriots 1 cybersecurity team from Westwood High School has made the top 10 in the first round of the GovernorÕs High School Cyber Challenge. From left are Trent Holmgren, Makenzie Rajala and Aili Harmon. (Photo courtesy of Ronalyn Arseneau)

A team from Westwood High School, Patriots 1, has been named in the top 10 of the first round in this year’s Governor’s High School Cyber Challenge, which involves teams composed of three high schoolers who are tested in their knowledge of cybersecurity, computer science and information technology.

The Merit Network reported there will be an estimated 3.5 million unfilled cybersecurity jobs in the United States by 2020, and, according to the National Initiative for Cybersecurity Education, one of the main reasons students don’t pursue cybersecurity as a career field is a lack of exposure.

However, at Westwood, seniors Makenzie Rajala, Aili Harmon and Trent Holmgren are getting that exposure — and are excelling at it.

“I really like it because it’s something that I’m interested in pursuing as a career,” Rajala said. “It really prepares us for the world and things we’re going to need to start focusing on as technology becomes more and more important in our society.”

Helping them in this field are Westwood business teachers Ronalyn Arseneau and Sabina Villar.

Rajala said students have been in activities such as testing passwords to see if they’re secure and looking out for potentially harmful things on a computer.

Round 1 in the Governor’s High School Cyber Challenge was all online questions, Arseneau said, with about 600 students from throughout Michigan taking part. Westwood had four teams.

“The first round of the competition was multiple-choice questions about different programming topics and networking and all kinds of things related to computer science and computer security,” Rajala said.

The next phase of the competition will be different.

Arseneau said round 2, the finals, will be set up as a “capture the flag” activity where students will look for vulnerabilities in the system that’s set up, answer questions and work hands-on in that environment.

The state winner will be chosen following that round.

Also making the top 10 was a team from the Marquette-Alger Regional Educational Service Agency, the Marquette/Alger Middle College CyberUPstars.

“They are complete novices so they had zero experience in cybersecurity this year,” said Middle College Director Brian Sarvello, who credited Northern Michigan University as being a team mentor.

The students’ inexperience apparently didn’t deter them from performing well in the first round.

“They were quick learners,” Sarvello said.

He also pointed out that Marquette County has less than 1% of Michigan’s population yet comprised 20% of the top 10 finalists.

“I think that speaks well to the quality of students we have in this area,” Sarvello said.

Rounding out the top teams were the Huron Hackers and River Rats, both from Ann Arbor High School; the Bright Pigs from Canton High School; Tech Support from Cass Technical High School; KAMSC12 RCAKAP from the Kalamazoo Area Math Science Center; NCCTCO1 from the Newaygo County Career Tech Center; and Cyberchiefs A and B from Okemos High School.

Round 2 will take place on Oct. 28 at the North American International Cyber Summit in Detroit.