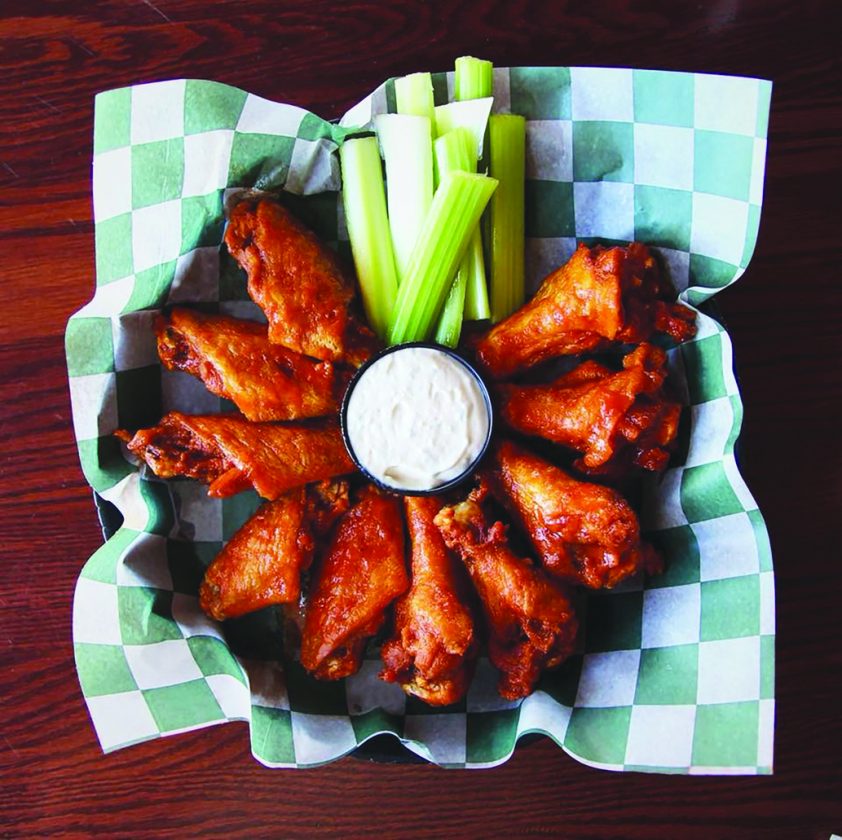 This photo is provided by Visit Buffalo Niagara. Sauce at the Bar-Bill is painted on each wing with paint brushes, and always served in batches of exactly five drumsticks and five flat wings. (Drew Brown/Buffalo Niagara via AP)

BUFFALO, N.Y. — The warnings come at you as soon as you step into the low-slung building that is Duff’s Tavern. Advisories are posted on the walls. On the menus. They’re even printed on the servers’ t-shirts.

Yet not everyone who visits this popular stop on the “Buffalo Wing Trail” heeds the advice.

Joe Duff, who owns the suburban Buffalo restaurant, sees plenty of teenage boys driven to tears — or hiding in the men’s room furiously splashing water into their mouths to cool the burn — after competing with their siblings or hockey teammates to devour the hottest wings on the menu.

The good news is this: You can find great meals along the Buffalo Wing Trail without testing your spice tolerance to the point of misery.

This list of 12 bars and restaurants was created by the Visit Buffalo Niagara tourism office when they realized their local dish was so beloved nationwide that it might just draw visitors in the same way that bourbon and craft-beer “trails” have done elsewhere.

Patrick Kaler, the president and CEO of Visit Buffalo Niagara, says choosing “the delicious dozen” was challenging given how many restaurants in the area make exceptional wings. His staff polled thousands of local diners on social media and scanned Yelp and TripAdvisor to form a solid but lengthy list of contenders. Then, to narrow it down, they turned to Drew Cerza, the “Wing King of Buffalo.”

Cerza is credited with founding the annual Buffalo Wing Festival 18 years ago, inspired by a fictional wing-fest in the Bill Murray movie “Osmosis Jones.” The Wing King will don his cape and wing-shaped crown again this year to host the festival on Aug. 31 and Sept. 1.

The final list of restaurants, unveiled last year, includes quirky places with loads of atmosphere, chicken wings that live up to the hype and — in the case of the Bar-Bill Tavern — a deliciously unique roast-beef sandwich called “beef-on-weck.”

“Beef-on-weck was the Buffalo thing before the chicken wing ever was,” says the Bar-Bill’s current owner, Clark Crook. “To Buffalonians, it’s as big as chicken wings.”

The wing list has sparked some debate on social media. Buffalonians are passionate about their wings, Kaler says, and many post online to advise tourists about wing joints they believe should be included.

Among the 12 that did make the cut, here are four you won’t want to miss if you’re visiting the Buffalo area. But a warning, from experience: Unless your stomach is made of iron, hitting two places per day might well be enough.

The medium-hot and hot sauces here pack as much flavor as they do heat. And the BBQ wings are more than an afterthought for heat-averse diners; unlike so many cloyingly sweet BBQ sauces, Duff’s is full of tangy, smoky warmth.

There’s often a wait for a table at the main Duff’s location. But the front-of-house staff keeps things moving, and the food is worth your patience.

You’ll be welcomed warmly, but will reveal yourself as an out-of-towner if you use the phrase “Buffalo wings.”

Don’t let the bland strip-mall exterior of Elmo’s fool you.

Inside you’ll find a cozy, unpretentious neighborhood sports bar that serves meaty wings with a twist: They’re fried, dipped in sauce, then grilled to caramelize that sauce, and dipped again in another sauce of your choosing. More than a gimmick, this creates a deep flavor and satisfying crunch.

Along with mild, medium and hot wing sauce, you can mix in Cajun, BBQ or honey mustard, and wash it all down with popular local craft brew Flying Bison Rusty Chain.