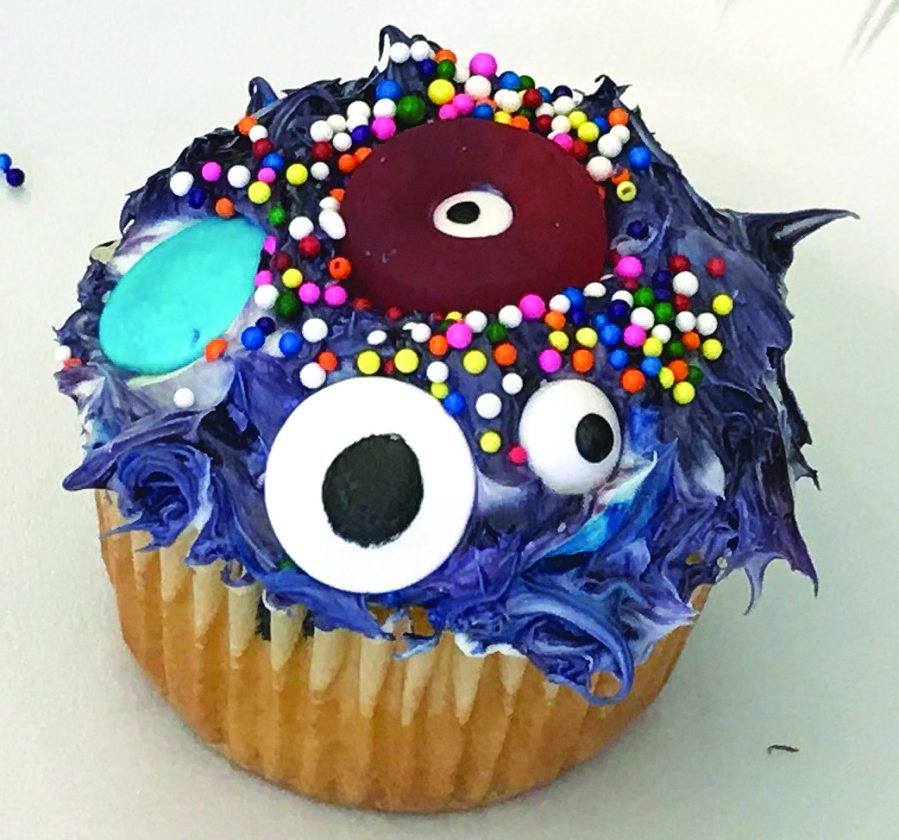 This is one of the cupcakes created during Wednesday’s Cupcake Wars at the Negaunee Public Library. (Journal photo by Christie Bleck)

NEGAUNEE — Can baking be competitive? Just look at the plethora of baking- and cooking-related shows on television nowadays.

They can be as addictive as the dishes created on these programs.

The Negaunee Public Library’s Junior Teen Advisory Group on Wednesday hosted its own Cupcake Wars for youngsters age 6 to 18, which took place at the library amidst the books and other educational materials at the facility.

Library Director Jessica Holman oversaw the event in which each participant was given two cupcakes, which she made, and a variety of decorating options. Participants judged the cupcakes and voted for their favorites, as long as they weren’t their own.

“Afterwards, they get to take the cupcakes home and eat them, or eat them right here if they want,” Holman said.

Although the youngsters could eat their tasty treats, the event was part of the library’s summer reading program.

That meant education played a part in the activity.

“Our themes for each round are space-based,” Holman said. “It’s a fun way to get kids into the library.”

The space theme — “A Universe of Stories” — ties into this summer’s 50th anniversary of the Apollo 11 moon landing, she said.

“They had a great time,” Holman said, “and so we decided to do it here.”

Violet Webster of Negaunee took part in Wednesday’s event. As a member of the Junior Teen Advisory Group, she plans parties and makes games.

She also plans to read “dragon books” this summer.

Cupcake Wars gave her the chance to do both.

With cupcakes being the shape of planets — at least the known ones — it wasn’t too difficult for the participants to get their cupcakes to resemble something that would be in orbit, although the sky, metaphorically, was the limit.

They had the option of decorating them with items such as Skittles, Swedish Fish, Sour Patch Kids, sprinkles, mints and sparkle gel.

The competition ended with Reyna Debelak and Madeline Boehmer, both of Negaunee, tying for top honors.

Upcoming events in the July summer reading calendar at the library include Reading Rugrats and Building Storytime, both at 10:30 a.m. and 11 a.m., respectively, on Mondays. A nature photography session for kids age 12 and over is scheduled for 2 p.m. Tuesday.

A Family Storytime is set for 4:30 p.m. Wednesday, with J-TAG to meet at 6 that evening.