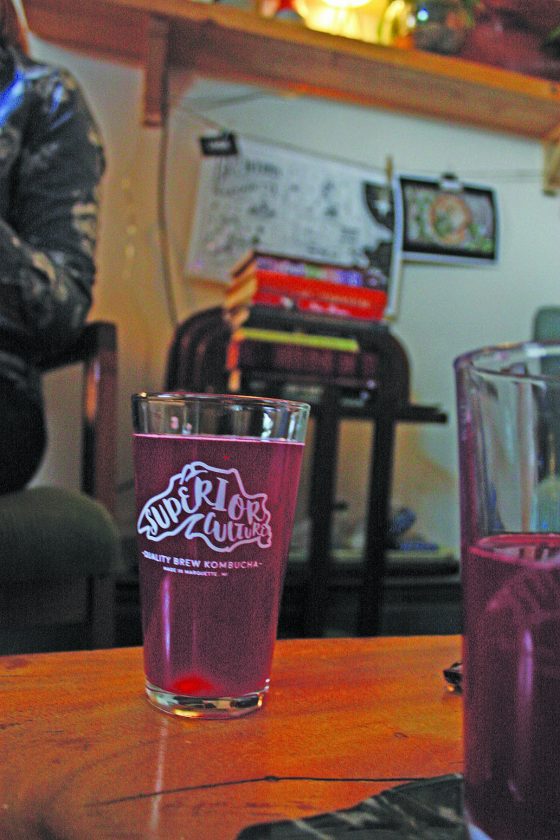 A pint of Superior Culture’s kombucha made with ginger-beet is pictured. (Journal photo by Jaymie Depew)

MARQUETTE — Ever wonder how kombucha is made, what it tastes like or what it even is?

A group of young professionals had the opportunity to see what the fermented beverage is all about Wednesday night by attending a social gathering at Superior Culture where they were given a tour from its owner, Alex Rowland.

In the taproom, people can find a rotating variety of nano-brewed beers, hand-pressed ciders, jun, as well as alcoholic and non-alcoholic kombucha, and more.

“Everything you see on this chalkboard here is made in the confines of this building,” Rowland said.

Kombucha — a drink made with tea, sugar, bacteria and yeast — is fermented in small batches using glass, stainless and oak barrels, Rowland said. The product is then brewed and flavored with freshly pressed fruit and vegetable juices, herbs and spices.

One of the best things about kombucha? Its health benefits, Rowland said.

“There’s like 25 different acids that are primarily present in kombucha,” he said. “A lot of them have anti-inflammatory, immune-boosting functions. Drinking kombucha actually helps to balance your body’s overall pH. It helps you kind of recenter everything. On top of that, boosting gastrointestinal health.

“Then we flavor it with all organic fruit juices and herbs and spices — so on top of the medicinal effects you get from kombucha, you’re also getting the medicinal properties of drinking fresh juice.”

Even though it has a slew of benefits, some people detest the idea of the drink because it can have a strong taste. However, Superior Culture uses plenty of juices and flavors that make the beverage smooth and palatable.

“I want somebody who never tried kombucha in their entire life to walk up to me and try something they actually like — that’s the main goal,” he said.

So far, people have been really receptive to fruitier beverages.

“Our grapefruit hibiscus this week has been really popular,” Rowland said.

Rowland graduated from Michigan State University in 2014 with a bioengineering degree. After traveling around the country, he moved to the Marquette area where he began making kombucha. In 2016, businesses started carrying it around town.

“We were basically just filling little bottles from a 5-gallon bucket in the Cruise N’ Coffee building on Wright Street,” Rowland said. “Then we started doing events like the farmers market every Saturday. Last year, we went to bigger festivals like Hiawatha (Music Festival) and some downstate. This will be the first summer having our taproom.”

Rowland is the sole proprietor of Superior Culture and has a small crew of employees. He said the main focus is going to be on the taproom since it’ll be open year-round and they’re just getting situated in the new location. However, Superior Culture will be at festivals and events over the summer with a trailer full of fresh product on tap.

So far, Rowland said, Forestville and Hiawatha music festivals in Marquette, Farm Block Fest in Allouez and Copper Harbor Trails Fest are for sure in the books.

Wednesday’s event was hosted by Connect Marquette — formerly 40 Below, which was created in 2010 as a way for individuals in the Marquette County area to come together with networking and professional development opportunities.

“We kind of want to highlight things and bring attention to them — like tonight’s focus is on kombucha and Superior Culture,” she said.

Memberships cost an annual fee of $50 and give people the opportunity to attend special events for free — otherwise, they’re $5 for non-members. The group is also involved with volunteer work throughout the community and hosts the annual Upper Peninsula Young Professionals Conference.

The organization is open to anyone under 40 years of age. More information can be found at connectmarquette.org.

Superior Culture is open on Tuesday and Wednesday from noon to 6 p.m.; Thursday through Saturday, noon to 10 p.m.; and Sunday, noon to 4 p.m. Happy hour is from 4 to 6 p.m. every day, aside from Monday when the business is closed.

More information can be found at www.superiorculturemqt.com or Superior Culture’s social media pages.