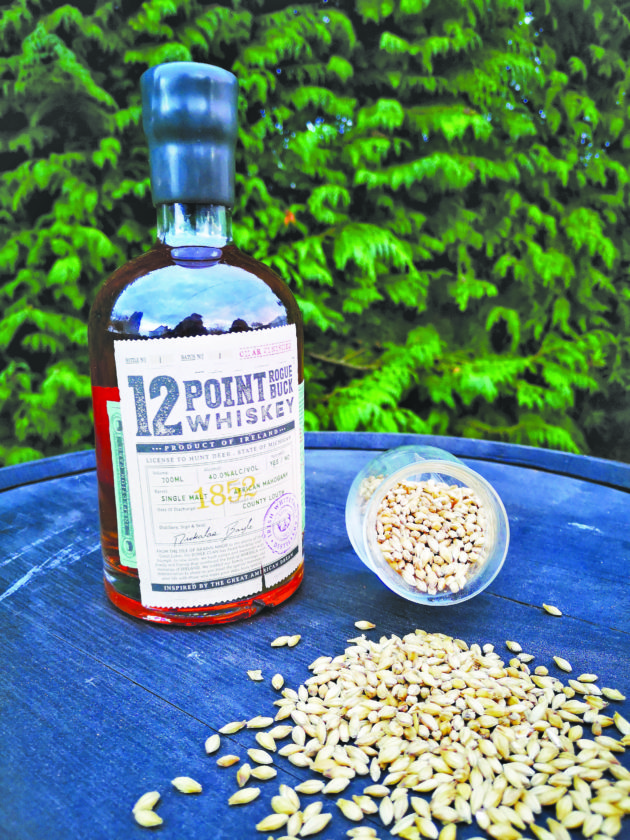 Whiskey Live Dublin attendees had the opportunity over the course of two days to sample the distillery’s 12 Point Rogue Buck, an Irish single malt whiskey that was aged in American bourbon barrels and finished with African mahogany using the company’s char finishing technology.

Over the years, Irish whiskey has surged to the top of the brown spirits popularity chain. Since premium whiskeys are often expensive, the Boyles crafted their recipe in an attempt to create a unique product that’s accessible for a decent price.

“We wanted something that everybody’s going to enjoy, yet at the same time is going to be affordable,” Nickolas said. “We thought that if we’re able to get that flavor of a premium whiskey, people who typically would not buy whiskey would have access to a good product.”

The reactions to 12 Point Rogue Buck at the well-attended Whiskey Live Dublin event were all encouraging, Nickolas said.

“The fact that we had no negative feedback over two days is pretty remarkable because we were expecting to have some criticism,” he said.

Those who sampled the whiskey picked up on a variety of flavors and subtleties.

“Some tasted fruit notes, or caramel, or a smokiness and spice, but nothing overpowering,” he said. “It was neat because depending on whoever was drinking, it seemed like the whiskey tailored to different needs.”

The Boyles’ goal was to craft a one-of-a-kind whiskey, and, according to the feedback received at Whiskey Live Dublin, they’ve reached that dream.

“We were very fortunate to be there, especially for being an unknown brand,” Nickolas said. “It was definitely a chance they took on us.”

12 Point Rogue Buck is scheduled to launch globally next year. The final product availability will be announced closer to its release, but the company is looking to have its product at Upper Peninsula stores in time for Christmas next year. The retail price is anticipated to be around $45 a bottle.

Irish Whitetail Distillery brings the story of emigration full circle. Produced on the shores of Ireland’s Ancient East, in the small community of the Cooley Peninsula, every effort is made to keep the Boyles’ product local to support local businesses and farmers in the small villages and communities that call the Cooley Mountains home.

The Boyle family left Ireland in the 1850s, after they found themselves one of many who were evicted from Arainn Mhor in Donegal.

The family traveled on coffin ships bound for North America without knowing where they would land. Their travels took them to Johnstown, Pennsylvania, before settling on Beaver Island on northern Lake Michigan.

After the fishing decreased on the island, members of the family moved north to Marquette and found work in the mills, logging camps and mines of the U.P., where most of them have resided ever since. Nickolas, a Marquette Senior High School and Northern Michigan University graduate, went to Ireland to attend the University College Dublin Michael Smurfit Graduate Business School and graduated in 2015.

Nickolas remembers bourbon and Canadian whiskeys always being a part of deer camp in the U.P.

“I’ve always enjoyed whiskey,” he said. “When I came to Ireland, I discovered that it’s engrained in the culture. People over here love their whiskey, just like people in the Upper Peninsula love their beer.”

So, what’s the future hold for Irish Whitetail Distillery?

“We’re hoping to have our stills in place in the village of Omeath by next Christmas and continue with our sourcing to make sure everything’s about the flavor of the whiskey,” Nickolas said. “It’s a niche market we’re in. We’re not trying to compete with big companies.”

The Boyles would like to eventually work with a variety of different spirits that’ll be released seasonally, but 12 Point Rogue Buck will available year-round.

Nickolas said after their whiskey is available in both countries, the Boyles might consider opening a second distillery in the Marquette area.

“We love it there. My family’s still there. We’re really looking at this as long-term and everything we do is with family on the mind,” Nickolas said. “Unless you are one of the native tribes, we all came to the U.P. in one way, shape or another. We’re all sort of emigrants in the area, developing family roots through the fabric of time. Our product will hopefully allow us to share those family values and stories with our drinkers.”