The Preserve open in downtown Marquette 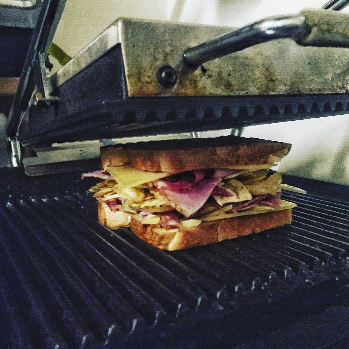 MARQUETTE — A new establishment in the downtown Marquette district is offering another option to those looking for a late night snack during the weekend.

The Preserve, a casual dining cafe owned by local residents Jeremy Johnson, Devin Mahoney and Tim Piirala, opened several weeks ago at 351 W. Washington St. The building was most recently home to The Flying Moose, an old-timey general store that closed in June.

Initially, The Preserve’s business partners planned to operate a mobile food truck that specializes in soups rather than a eatery.

“We’ve done a bunch of different things in town,” Johnson said. “We’ve run music venues and we have a rental unit, but we’ve always wanted to do something bigger, and Devin’s goal is to open a soup food truck. So in the beginning, we started going around asking people if we could rent out their kitchens for that.”

Long story short, when the partners asked the owners of The Flying Moose if they could use their kitchen to make soups, they were told the building was for sale.

“It’s not really what we were looking for but we had some interest. It took about six months until we figured everything out,” Johnson said. “So the soup truck is still in the works but in the meantime, we’re getting this up and running.”

During the day, light shines through the windows of the old building, beaming on new coolers and rustic wooden shelves. It’s a completely different atmosphere in the evening, Johnson said, and convenient for those looking for a snack around bar close.

“We have black lights,” he said. “If you come here on a Friday or Saturday night, sometimes there’ll be 30 or 40 people here playing with the magnets on the walls or checking out the lights and getting something to eat.”

“For us, the biggest thing is the late night food,” Johnson said. “It’s a casual environment where people can come and sit down or get it to go. There isn’t a lot of options for food after 11 o’clock in downtown Marquette. Right now, it’s just on Fridays and Saturdays until 2 a.m., but we’re trying to figure out if we can stay open until 3 a.m.”

Even though the business doesn’t have a license to serve alcohol on-site, The Preserve does offer a selection of beer and wine for take-out. After filling coolers with a variety of Michigan craft brews, Johnson said he also hopes to soon offer beers from other states that aren’t found anywhere else in the area. They also plan to have single beers available, so people can purchase a variety of styles, or just one if they choose.

“We’re looking forward to expanding our collection of everything since this is all pretty new to us,” he said. “Devin has 10 years of cooking experience, Tim’s background is in construction and mine is in software, so we’re still getting things going and trying to get our shelves filled with different product and are working on expanding our beer and wine selection and seeing what else we can do with this space.”

The Preserve also carries Superior Culture’s kombucha and Davin’s Nitro Coffee on tap. The plan is to upgrade the four-tap system to eight or 10 taps eventually and add other nonalcoholic drinks to the lines, like root beer.

“That will potentially expand a lot in the future as we figure out how our soup process is going to work,” Johnson said, adding that they hope to be operating the mobile food truck within a year or so.

The truck, SOUPED U.P., as it’s called, is a sprinter van with “big ole winter tires on it,” Johnson said.

“It’s an off-road vehicle, so we’ll be able to take it to places like Mount Bohemia,” he said. “Once it’s ready, it wont have any trouble getting to those hard-to-reach places in the middle of winter. That’s kind of where the idea came from, being able to provide hot food to different speciality events, like the fat-tire bike races, the ice-climbing events they do in the central U.P. and things like that.”