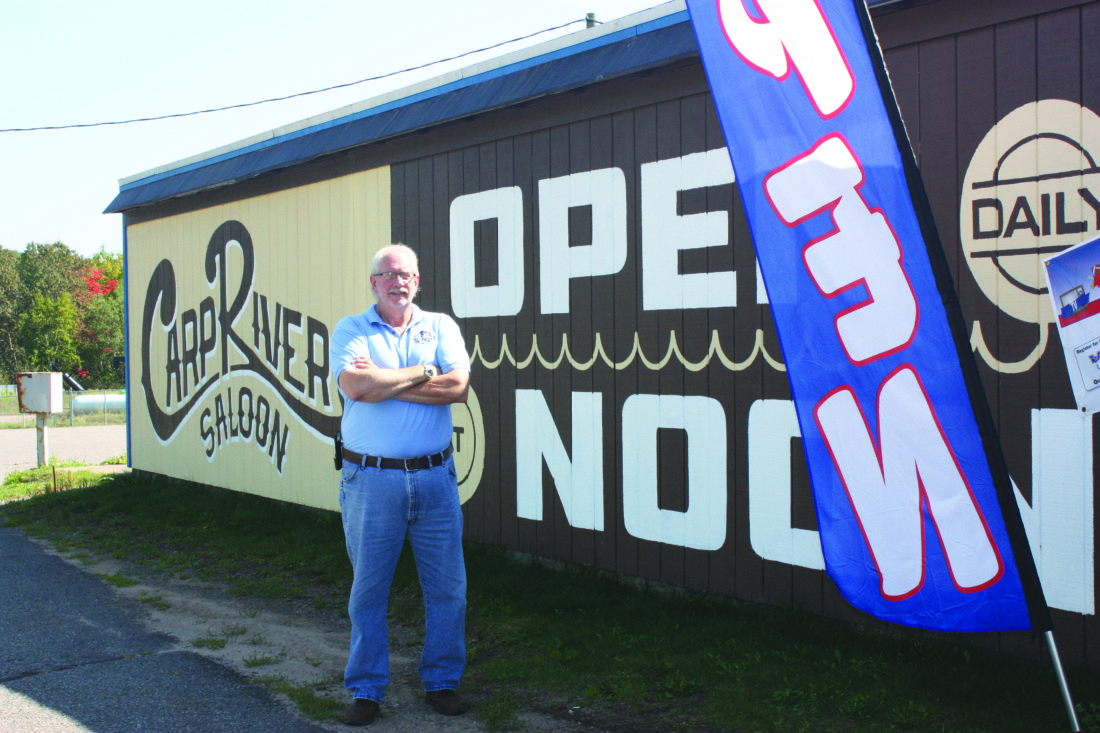 MARQUETTE — Those traveling along M-553 may have noticed a few changes at Marquette Mountain recently, including a large painted sign on the building that reads: Carp River Saloon — opens noon daily.

Formerly known as The T-Bar, the restaurant and bar is a must-stop for those craving a bite to eat or tasty beverage in the building adjacent to the winter sports facility.

In May, Frank Malette became general manager of the Marquette Mountain operations. After deciding to rebrand the restaurant, Malette created a Facebook poll asking the public for name suggestions.

“We did a contest on Facebook and I had actually wanted the word ‘mountain’ in the name, and it seems to me there was just shy of over 200 people who responded with names and the very last person who responded, responded with ‘Carp River Saloon’ and I just liked it right away,” Malette said.

Malette explained that there were some people concerned about the word “saloon” because there’s generally a western implication.

“If you watch old Gunsmoke shows, everybody goes to the saloon. I didn’t care. I wanted something that sounded a little bit broader in terms of its offering other than ‘a bar,'” he said. “If you ski out in the west, … which is where most of the world goes skiing, every property there has a saloon, you know, it’s just common. It’s something that’s engrained in the skiing community.”

The name was changed about six weeks ago, Malette said, but the building is still undergoing some interior modifications.

“The interior is a consistent ongoing process,” he said. “We’re a dive bar by the river at the bottom of the hill. I mean, really, we just are — and we’re never going to be anything different than that and there’s no use trying to. So I said ‘Let’s just embrace that. Let’s do good bar food, but we don’t have to feel like we’re sitting in a dungeon all the time.

“So all the blue got painted out, we’re not quite done with the ceiling yet, but we put in these LED lights and holy cow did that make a difference,” he continued. “It’s a lot more pleasant than it was. We can make it dark at night if we want to, we can dim the lights on the whole thing if we have a band or something, but we wanted to get the whole place lighter, cleaner and cheerier.”

The wooden booths and tables that have been part of the establishment for years will stay in place but will undergo some slight improvements.

Malette has a long background in the food and beverage service industry, running Ponderosa Steakhouses all over the country. To determine the saloon’s menu options, he said staff took a “long look at the existing menu” to figure out what should stay and what should change.

One of the items added, Malette said, is a half-pound, 100 percent prime burger that comes on a toasted ciabatta bun with American cheese, onions, pickles, tomato and lettuce for $10. If you prefer a different type of cheese — no problem. The saloon also offers Swiss, cheddar or provolone.

All sandwiches are served with waffle fries and a pickle spear.

Malette said customers can get a burger, fries and beer for $12 since the saloon has a $2 draft beer special everyday.

“My whole philosophy is give people the best value that you can possibly give them right upfront. Don’t make them jump through hoops to get a deal,” Malette said. “We don’t do a happy hour and one of the reasons is because we lowered all of the prices at the bar anyway.”

Speaking of beer, the saloon has a variety of six draft beers available, which is an improvement from the three-tap system The T-Bar had, Malette added.

“The beer was a big deal for us. We used to only have three beers on draft, which was adequate, but not really because if you didn’t happen to like one of those three beers, which was driven by people who were here all the time, you were out of luck. So I doubled that and we went to six,” he said. “I added a chiller system to it too. The lines go straight through the floor into the cooler and into the kegs — so when we pour you a draft beer, it’s coming out of the tap somewhere right around 30 degrees. So on a hot 85 degree day when you could really use a cold draft, this is the place to come and get one.”

A hot item the saloon recently added to its menu is whitefish nachos. At $7 for a small order and $12 for a large, people can enjoy a plate full of nachos with a bed of fresh greens and a grilled piece of whitefish atop. The idea stemmed from a staff member who wanted nachos and a piece of whitefish, so she decided to try both. It became such a hit with staff that they put it on the menu.

The saloon also has an all-you-can-eat Friday Fish Fry Buffet that goes from 4:30 to 8:30 p.m. every Friday at $13 per plate. The buffet includes Guinness breaded cod, whitefish, popcorn shrimp, chicken wings, coleslaw, dinner rolls and waffle fries, so there’s a little something for everyone, Malette said.

During the winter season when the facility is open for skiing and snowboarding, Marquette Mountain will also run a cafeteria that will include fresh, homemade soups in its banquet room.

The saloon has music bingo or trivia at 7 p.m. every Tuesday as well as live music on Thursday and Friday.

“We also have music on Saturdays when we don’t have some other event since we (provide space for) weddings and reunions and stuff like that,” Malette said. “Once we get into winter season, we’ll probably have bands every Thursday through Saturday and if we need to add days, we’ll add days.”