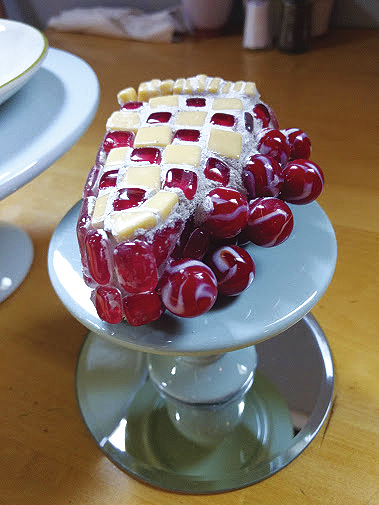 MARQUETTE — Fresh, farm-to-table meals isn’t the only notable product that’s made from scratch and found at a Marquette restaurant.

Since October, the Marquette Artist Collective and Café BODEGA have collaborated and expanded the local art scene by showcasing creative exhibits at the eclectic restaurant along Third Street.

A food-themed exhibit called Food for Thought will run throughout August and September, showcasing a variety of mixed mediums, including photography, acrylic paintings and many others, with a reception planned for Thursday.

The free event will be held from 7 to 9 p.m. at the restaurant, where the public will have a chance to meet the artists, view the artwork, and enjoy a variety of appetizers and refreshments. Most of the artwork is also available for purchase.

“Nothing brings people together like food, art, drink and music,” she said. “You can come from opposite corners of the world and find there’s a connection to most of those things.”

Joy Bender Hadley, president and founder of the collective, said the Food for Thought exhibit is the first invitational show where everyone could participate. Previous exhibits consisted of artwork from only collective members.

“We’re always thinking of what might embellish this really cool space,” she said of Café BODEGA. “So, we were throwing around ideas for a theme and I was like ‘What about food?'”

The collective is a group of people from all walks of life with members employed in a vast array of fields, including graphic design, journalism, psychiatry, nursing, teaching, photography and more.

“We’re about to celebrate our first anniversary, which is awesome. We started out with three members and now have 20,” Hadley said.

The collective holds bimonthly gatherings of visual artists, including members and guest artists, to support diverse forms of artwork and creatively engage the community.

They prefer calling them “gatherings” instead of “meetings” because “meetings sounded too stuffy,” said Hadley.

The gatherings are held on Tuesdays, every other week, with each one involving a topic of discussion or project activity focus. They also plan exhibits and throw around ideas of how to get involved with the community creatively and be supportive of fellow members and guest artists.

The concept of the collective came last summer as Hadley considered ways to create a supportive group of artists. She posted a simple inquiry online and the response was immediate.

The collective started off with three artists; Hadley, Melissa Sprouse, who bought HOTplate Pottery & Art Studio shortly after joining the group, and Claire Moore of heART in hand DESIGN. The three of them got together and discussed ideas for a basic group structure, and the Marquette Artist Collective was the result.

According to its blog, the collective has continued to grow, with the largest increase in the beginning of 2018, a time when many reevaluate what their mission, goals or needs may be during the new year ahead.

“A lot of what we’re doing is trying to get people to expand their creativity. We want to get it out there that, maybe if you see yourself as a photographer, try writing or painting,” Hadley said. “We’ve had a lot of new members who are new to the area coming from different places looking for a community. The group really supports each other, it’s not a competition because we share ideas and influence each other.”

Taryn Okesson, the collective’s public relations specialist, said she joined the group after trying to find ways to produce more art and share it with others. She was the winner of the 2018 Blueberry Festival Poster Contest that was hosted by the Marquette Downtown Development Authority.

Café owner Nelson, a local art teacher like Hadley, said one of the main reasons she appreciates the collective is because they focus on teaching and learning at the same time.

“I feel like the group helps break down the myths some people carry from when they were in school, like what it means to be an artist,” Nelson said. “This is really important to the fibers of our community because a lot of folks, if they’re not involved in a creative job or hobby, they remember what it’s like when they were in school and might hold on to some negative memories. Besides being super appreciative to the collective for filling the walls, I think it helps with the realization of how important art and design is, it’s everywhere — there’s furniture design, graphic design, architecture, it’s all around us. Being able to provide a public space for artists to exhibit work and be visually stimulating at the same time –“

“It’s a win-win for everyone involved,” Hadley added.

Artwork from collective members will be featured at the Travel Marquette office throughout September. Other upcoming displays include an exhibit from October to mid-November in the Huron Mountain Gallery at the Peter White Public Library, and an exhibit at the Ore Dock Brewing Company in November, with a reception to be announced in the near future.