Turn to crab for a warm, bubbly decadent party pleaser 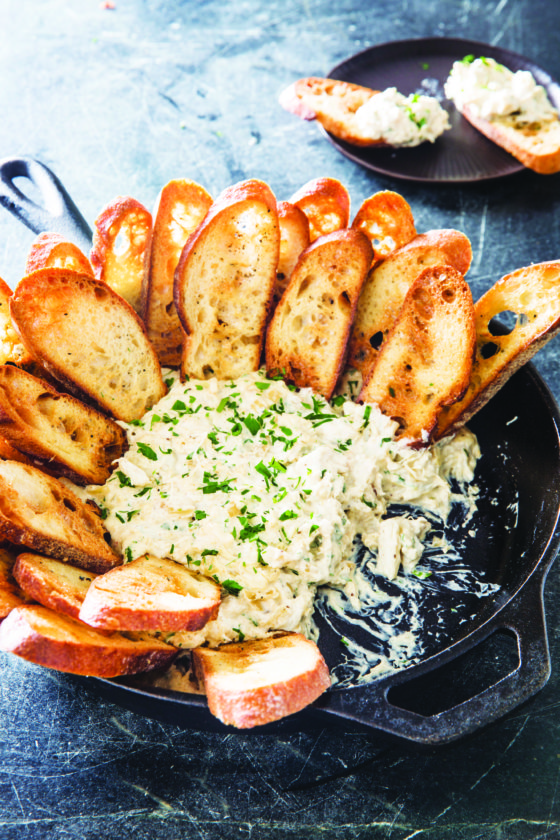 In its ideal form, crab dip is a warm, decadent party pleaser full of creamy, meaty seafood and savory spices. Unlike other versions of this popular appetizer, ours has a high ratio of crab to cheese, allowing the sweet crab flavor to come through.

To make it even more party-friendly, we used a cast-iron skillet as an oven-to-table cooking vessel, which ensures that your guests will enjoy the dip while it’s hot.

For a serving option that was sturdy enough to scoop into the rich dip without any need for a spoon, we made a quick batch of crostini from sliced baguettes. To make a savory base for the crab dip, we first cooked onion in the skillet, adding just a bit of Old Bay seasoning and coriander. We then removed the sauteed onions from the skillet and combined them with cream cheese, mayonnaise and parsley.

After gently folding the crabmeat into the mixture, we put the whole thing back in the skillet and baked it until it was warm and bubbly, with the crostini fanned around the perimeter. Do not substitute imitation crabmeat here. To soften the cream cheese quickly, microwave it for 20 to 30 seconds.

¯12 ounces lump crabmeat, picked over for shells and pressed dry between paper towels

Adjust oven racks to upper-middle and lower-middle positions and heat oven to 400 F. Arrange bread slices in even layer on 2 rimmed baking sheets and bake until dry and crisp, about 10 minutes, rotating sheets and flipping slices halfway through baking. Brush crostini with 2 tablespoons oil and season with salt and pepper; set aside.

Spread dip evenly in now-empty skillet, then shingle crostini around edge, submerging narrow ends in crab mixture. Transfer skillet to oven and bake until dip is heated through and crostini are golden brown, about 10 minutes. Sprinkle with remaining 1 teaspoon parsley. Serve.